Sign in / Register
HomeInstrumentationsString quintetString Quintet No. 1 in A Major, "Spring": I. Allegro moderato

String Quintet No. 1 in A Major, "Spring": I. Allegro moderato 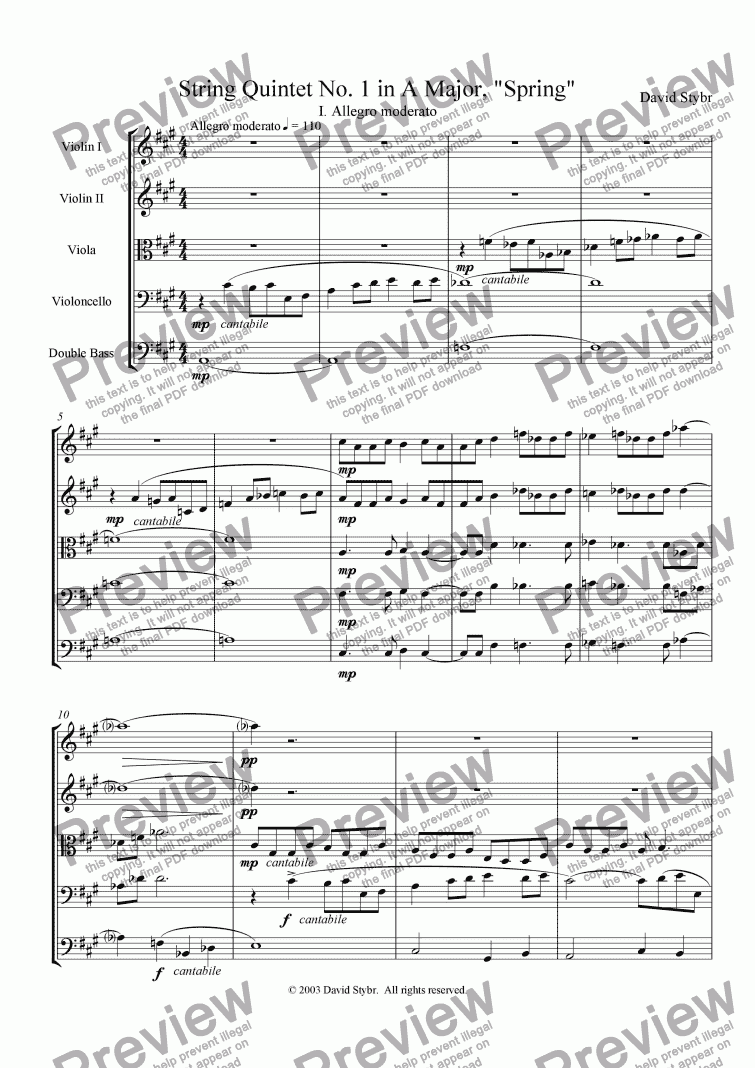 String Quintet No. 1 in A Major, "Spring": I. Allegro moderato

Composer
David Stybr
Year of composition
2003
Lyricist
none
Difficulty
Difficult (Grades 7+)
Duration
8 minutes
Genre
Modern classical music
License details
For anything not permitted by the above licence then you should contact the publisher first to obtain permission.

Commentary by Left Brain and Right Brain. LB: "This movement is a modified sonata form in A Major and 4/4 time, with forays into D-Flat Major and F Major (the keys of Movements III and II). An odd choice of keys perhaps, but all 3 are equidistant from each other, separated by major 3rds. A brief Introduction spans all 3 keys, and leads into the Exposition. Theme I is in A Major, Theme II in D-Flat Major, and the Development in F Major. Incidentally, major 3rds are double tones, which I sometimes divide into whole-tone scales. The Recapitulation and Coda return to A Major." RB: "Sonata form thrives on contrast, and this movement is chock full of contrast. Nice conversations between voices too. After the bustle of melodies, the Development includes a R?verie in 3/4 time for a lyrical double bass solo, if you got musicians who play real smooth." LB: "2002 was one of my busiest years as an engineer, but December finally gave me time to compose, and this music was very well received. Next I corrected typographical errors, and incorporated suggestions from musicians, such as to remove the beams from the pizzicato 8th-note accompaniment of Theme II." RB: "Never waver to do a favor for a quaver, I always say." LB: "This movement was completed New Year's Day 2003, after a splendid sailboat cruise in Pearl Harbor, Oahu, Hawaii, with a friend who is a Captain in the United States Navy. This was a rare privilege for me, and we had East Loch to ourselves (except for the watchful eye of military security). The music may reflect my awe to sail and hear the peaceful waves, amidst gorgeous Hawaiian scenery. Mahalo."

Reviews of String Quintet No. 1 in A Major, "Spring": I. Allegro moderato