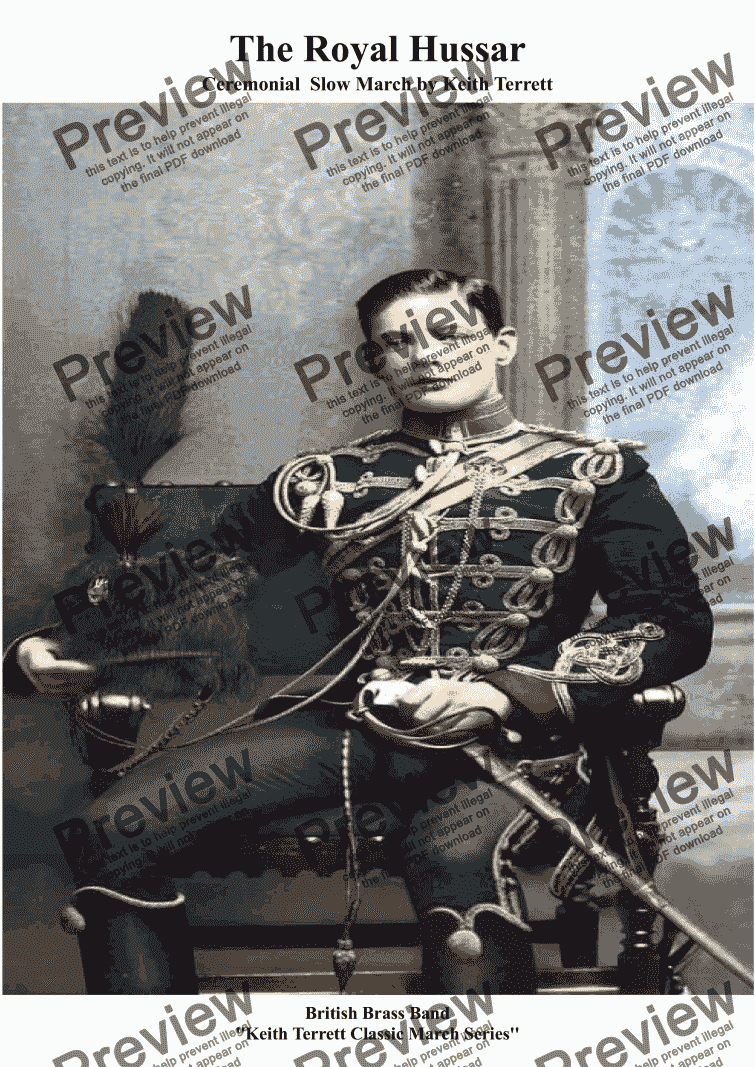 Composer
Keith Terrett
Year of composition
2010
Publisher
Music for all Occasions
Difficulty
Moderate (Grades 4-6)
Duration
3 minutes
Genre
Other
License details
For anything not permitted by the above licence then you should contact the publisher first to obtain permission.

A poignant original ceremonial slow march of mine entitled ''The Royal Hussar'', written for British Brass Band. There is also a version for Concert/Wind Band in my store.

Put Coburg, Royal Standard & Golden Spurs away in the library, and try my ''The Royal Hussar'' for your next parade.

If you need parts in Bass clef for the low brass lin North America let me know: keithterrett@gmail.com

Record my march, and I will send you any of my marches free of charge!

Other marches in my store:

Slow March: This is a ceremonial pace, used for funeral marches and when a unit’s colours are marched out in front of the troops. The feet are kept parallel to the ground and the arms are never used. In the United States Marine Corps, arms swing as the distance they normally would in quick time, but at the same pace as marching. U.S. Marine Color Guards do not swing their arms. Slow March is typically used in the Marine Corps for funeral details and ceremonies such as the Marine Corps Ball (when the cake is escorted out). In Spain, Latin America, and the Philippines this is done during religious processions whenever a military band joins it. This march style is the official parade march in the armed forces of Bolivia and Ecuador and the military academies and schools of Venezuela, done with the goose step during parades and ceremonies. The standard pace is 60 paces per minute. Half Step March or Cut the pace: This is a U.S. march pace.