Sign in / Register
HomeInstrumentationsString quintetString Quintet No. 1 in A Major, "Spring": III. Hymn and Tango

String Quintet No. 1 in A Major, "Spring": III. Hymn and Tango 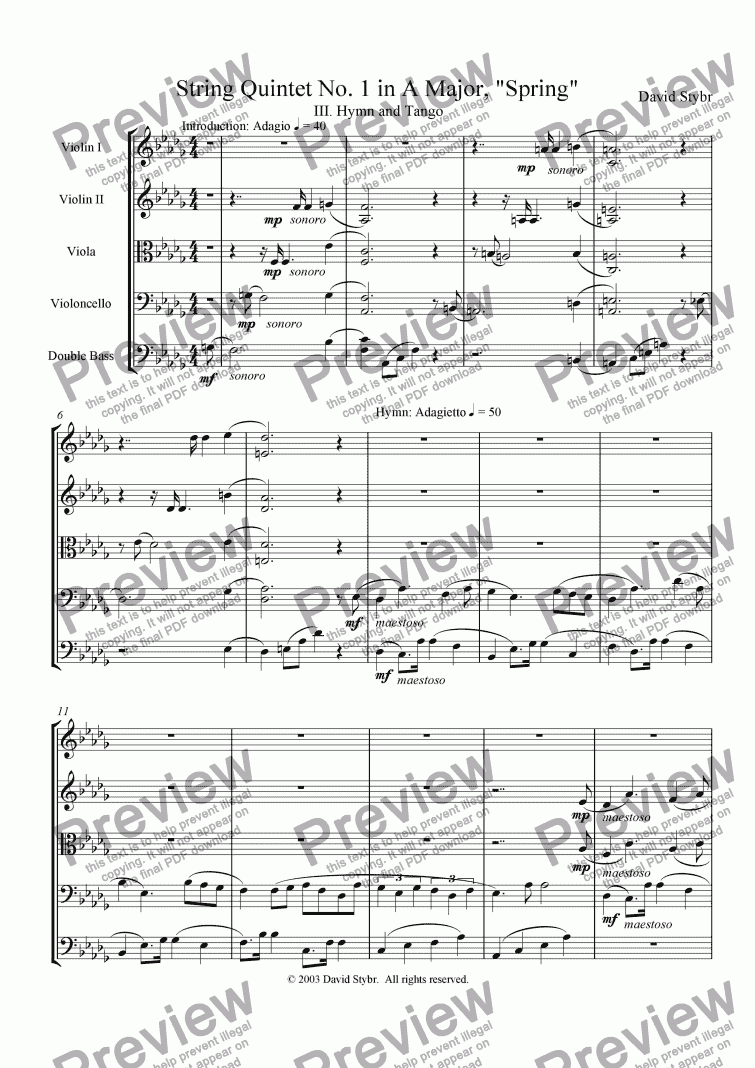 String Quintet No. 1 in A Major, "Spring": III. Hymn and Tango

Composer
David Stybr
Year of composition
2003
Lyricist
none
Difficulty
Difficult (Grades 7+)
Duration
8 minutes
Genre
Modern classical music
License details
For anything not permitted by the above licence then you should contact the publisher first to obtain permission.

Commentary by Left Brain and Right Brain. RB: "I'll kick off this discussion. The fast first movement has a slow episode, so how's about a slow movement with a fast episode? We fused 2 styles with little in common for contrast, and this Hymn and Tango combo could be subtitled 'The Sacred and the Seductive' (? la Claude Debussy's Danses Sacr?e et Profane). It's a simple ABA structure: Hymn-Tango-Hymn." LB: "The inspiration was equally simple. En route home from Hawaii in January 2003, we flew overnight from Honolulu to Los Angeles, to connect with a flight to Chicago. Minutes before dawn, we tookoff from LAX Airport to the west over the Pacific Ocean, then made a long slow turn south and east around the scenic Palos Verdes Peninsula and Channel Islands of Southern California. As we flew inland, the beauteous golden peaks of the San Gabriel Mountains glowed in the Sunrise at that instant. As the Sun rose before us and the Land and Ocean fell away beneath us, that unforgettable dawn inspired the thrice-stated Introduction motives and the serene Hymn." RB: "Here's the scoop on the Tango. As we left LAX, a Qantas jet from Australia landed in the next runway. My mind drifted to the Southern Hemisphere, but the Spanish names in California made me think elsewhere down under the Equator: Argentina, Chile and Uruguay. My memories 4 years earlier of boisterous Buenos Aires, splendid Santiago and magnificent Montevideo transmogrified the Introduction and Hymn into a sensual Tango. This piece is like the dawn, a frenetic day, and then dusk with a stunning Moonrise." LB: "The Hymn is in D-Flat Major, with the Tango in its tonic minor, C-Sharp Minor, and then its subdominant, F-Sharp Minor (relative minor of the home key of the quintet: A Major). The expansive Theme I of the first movement reappears in its original A Major, but its contrapuntal context markedly changes its character. In the final section, each phrase of the Hymn modulates upward by major 3rds: D-Flat Major, F Major, A Major and finally D-Flat Major again." RB: "The tonalities may be symmetrical, but the phrases aren't. The Hymn has 7-bar phrases, and the Tango has 6-bar phrases. And the harmonies only seem simple. Not many accidentals, but they sure mix together well. On the other hand, string players won't like 5 flats, but I stuck to the tonal progressions, so as a compromise the D-Flat Major sections are slow."

Reviews of String Quintet No. 1 in A Major, "Spring": III. Hymn and Tango