By: William Elsom
For: Brass band
This music is in your basket
View basket
Loading... 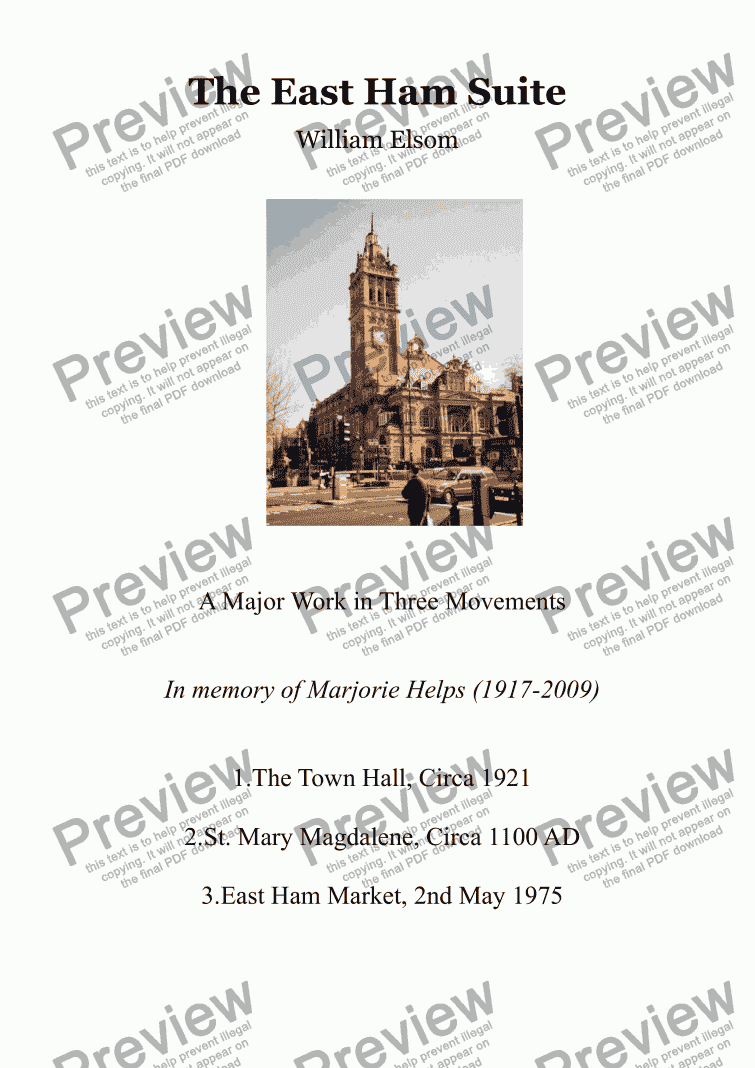 By: William Elsom
For: Brass band

Composer
William Elsom
Publisher
Will Elsom
Difficulty
Difficult (Grades 7+)
Duration
13 minutes
Genre
Classical music
License details
For anything not permitted by the above licence then you should contact the publisher first to obtain permission.

East Ham is the area of London in which I grew up, and I have attempted to depict it at various points in its history.

The Town Hall is a magnificent red brick building situated at the main crossroads in East Ham. The Clock Tower has four faces, and a plaque bearing the legend “Tempus Fugit” under each one. The Euphonium solo presents the idea of “Tempus Fugit” for the first time. It is followed by sections depicting the bustle around the town hall on the day of a Mayor’s investiture; (B) the stately procession of the Mayor elect to the town hall (F); a short chorale depicting the serene silence in the hall before everyone enters (I), then a fanfare (J) followed by the swearing in of the mayor (K). The movement closes with a restatement of “Tempus Fugit”.

St. Mary Magdalene church is reputed to have the largest cemetery within a churchyard in England. The second movement starts and finishes with a chorale, and the whole tone scale utilised in the middle section (U) depicts the ethereal feeling of the area. Tempus Fugit is developed in the ascending and descending whole tone semiquavers.

East Ham Market is a bustling hive of activity, with many colourful personalities, most of whom are West Ham United Supporters. The third movement is set the day before the 1975 FA Cup Final. Snippets of the “Bubbles” theme may be heard by the discerning football supporter as the movement develops. The Flower Seller (W) always seemed to be the first ready, followed by the lively greengrocer (Z), who had the irritating habit of blowing a whistle to attract custom. Tempus Fugit is developed in the 12/8 theme in the trombones. The Pots and Pans Stall (BB) follows with clearer indications of the “Bubbles” theme. As the day progresses, “Bubbles” gets stronger, and the themes of the market stalls are heard battling for dominance (DD) before the piece climaxes with “Pretty Bubbles in the Air.” The Coda (GG) cries out “I’m For Ever Blowing Bubbles!” as the population of East Ham prepares for victory at Wembley the following day.

Snippets from Bubbles have been used with the kind permission of Carlin Music, the owner of the copyright.

Performance notes - Conductors should seek to achieve contrast between dynamics, accentuating the quiet passages rather than just taking ffs to the max. The last stanza has no rall. or rit., and I would rather see (hear!) a small accel than either.

I look forward to hearing conductors’ interpretations of the piece.

This piece is dedicated to the memory of Marjorie Helps, without whose tireless efforts Newham Academy of Music would have folded long before I ever learned anything there.