MAIER - STARR: Song of the Sick Maiden REDUCTION FOR VIOLIN AND PIANO

By: Amanda Maier
For: Solo Solo Violin + piano
This music is in your basket
View basket
Loading... 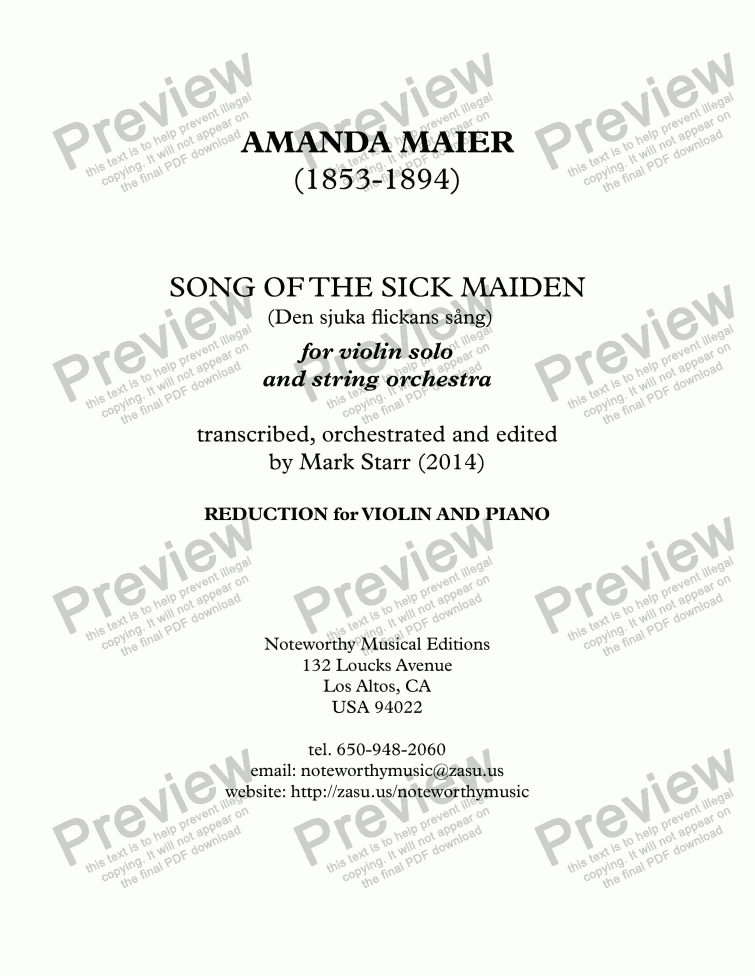 MAIER - STARR: Song of the Sick Maiden REDUCTION FOR VIOLIN AND PIANO

Composer
Amanda Maier
Year of composition
1878
Publisher
Noteworthy Musical Editions
Difficulty
Moderate (Grades 4-6)
Duration
5 minutes
Genre
Classical music
License details
For anything not permitted by the above licence then you should contact the publisher first to obtain permission.

The MP3 file on this page contains a digital performance of the orchestral version for violin solo and string orchestra.

Swedish violinist/composer Amanda Maier was a major soloist in the 1870s in Scandanavia and Germany. At the age of 22, she composed a Violin Concerto in One Movement, which she premiered in Halle, Germany in 1875, and subsequently performed frequently in Northern Europe with many orchestras including the Gewandhaus Orchester in Leipzig and the Royal Swedish Orchestra in Stockholm. Both her playing and her composition were enthusiastically acclaimed by audiences and by critics (and by composers Carl Reinecke and Niels Gade, among others.) Incidentally, Maier's Violin Concerto in One Movement was recently edited by Mark Starr and published by Noteworthy Musical Editions. It was recently premiered in Karlstadt, Sweden by the Norwegian violinist Bjarne Magnus Jensen–to great acclaim. The reduction for violin and piano is available on amazon.com.

Maier composed "The Song of the Sick Maiden," a dramatic lied for medium voice and piano, in 1878. She was already firmly established in her native Sweden as an important violin soloist and as an accomplished composer. In addition to her success with her violin concerto, her Sonata for Violin and Piano in B minor had been awarded a prize by the Swedish Academy. She performed that work in recitals throughout Scandanavia, Germany, and Russia.

By 1878, she had also met Julius Roentgen, the son of her violin professor in Leipzig. She and Julius were engaged and would marry in 1880.

In 1878, Maier was 25 years old. She was not only a brilliant musician, she was also a remarkably beautiful woman. She was warmly cherished by all who knew her. It would seem that Amanda had everything that life could possibly bestow on a young Swedish woman in the late 19th Century; and her future life with the increasingly important pianist, composer, conductor and teacher Julius Roentgen promised more of the same.

What then, could possibly have possessed Amanda Maier to set to music Carl David af Wirsen’s dark, foreboding poem, "Den sjuka flickans sång" (Song of the Sick Maiden) – with its cold contemplation of imminent death, and its fatal resignation toward the inevitable? One must consider the possibility that this work might in some way be autobiographical.

The magnificent music that Maier composed can only be described as a "cri du coeur." It is passionate, dramatic, brooding, and finally tranquil – a range of emotions that belies the composer’s youth (and, in the 19th Century, her gender.) If this song resembles any well-known musical work, it might well be moments in Mozart’s Requiem.

Medically, it is known that tuberculosis can take many years to progress from first exposure to the bacillus to visible symptoms of the disease. In the 1870s, there were no x-ray examinations or blood tests for tuberculosis. Tuberculosis was then a difficult disease to diagnose until the degenerative symptoms– such as a chronic, blood-tinged cough and progressive weight loss – became obvious.

These medical facts raise the possibility that, in the case of Amanda Maier, she may have been exposed to the disease much earlier than generally thought. She may have suspected that she had been infected with tuberculosis as early as 1878 (years before an official medical diagnosis.) This song may have been the result of her realization of what then was considered a death sentence. Admittedly, this idea is still speculative, but I offer it as one possible explanation for Amanda Maier’s astounding selection of Wirsen’s morbid text, and the outpouring of horrific emotion that she bestowed upon it with her poignant music.

I decided to transcribe and orchestrate this song for several reasons. First, the piano accompaniment struck me as innately orchestral – actually best suited, in my opinion, for a string orchestra. A large body of strings can infuse all those repeated chords with intense emotion even more than the percussive piano can. The vocal part demands long lines of sustained tension, pushing the limits of a singer’s breath control and power. It seems to me the melodic line is also ideally suited for a lyrical solo instrument like the violin or the flute. And in this version featuring the solo violin, we have the additional attraction of the plaintive memory of Amanda Maier, violin soloist.

Reviews of MAIER - STARR: Song of the Sick Maiden REDUCTION FOR VIOLIN AND PIANO