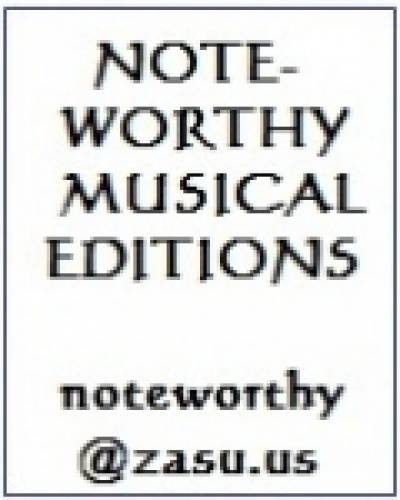 Noteworthy publishes unusual works of distinction by major composers - particularly by composers from the 19th and early-20th Centuries. It's specialty is new orchestrations of works now in the public domain in the EU, the US, Canada and Asia. You can visit the website of Noteworthy Musical Editions at http://zasu.us/noteworthymusic

Thus, Noteworthy offers works that are available nowhere else. All of its editions are copyright and registered with ASCAP.

Noteworthy Musical Editions offers an orchestral music rental library. It makes available its scores and instrumental parts to symphony orchestras and chamber orchestras for performances and/or recordings in the U. S., U. K., Europe, Asia and Canada.

Noteworthy Musical Editions will evaluate submissions by other arrangers of new orchestrations of works in the public domain for possible inclusion in its orchestral parts rental library – provided those orchestrations are already notated in Sibelius. Arrangers: please send your inquiries to noteworthymusic@zasu.us.