Sign in / Register
HomeInstrumentationsOrchestraJason And The Dragon of Colchis - Part 1

Jason And The Dragon of Colchis - Part 1

By: John Hughes
For: Orchestra
This music is in your basket
View basket
Loading... 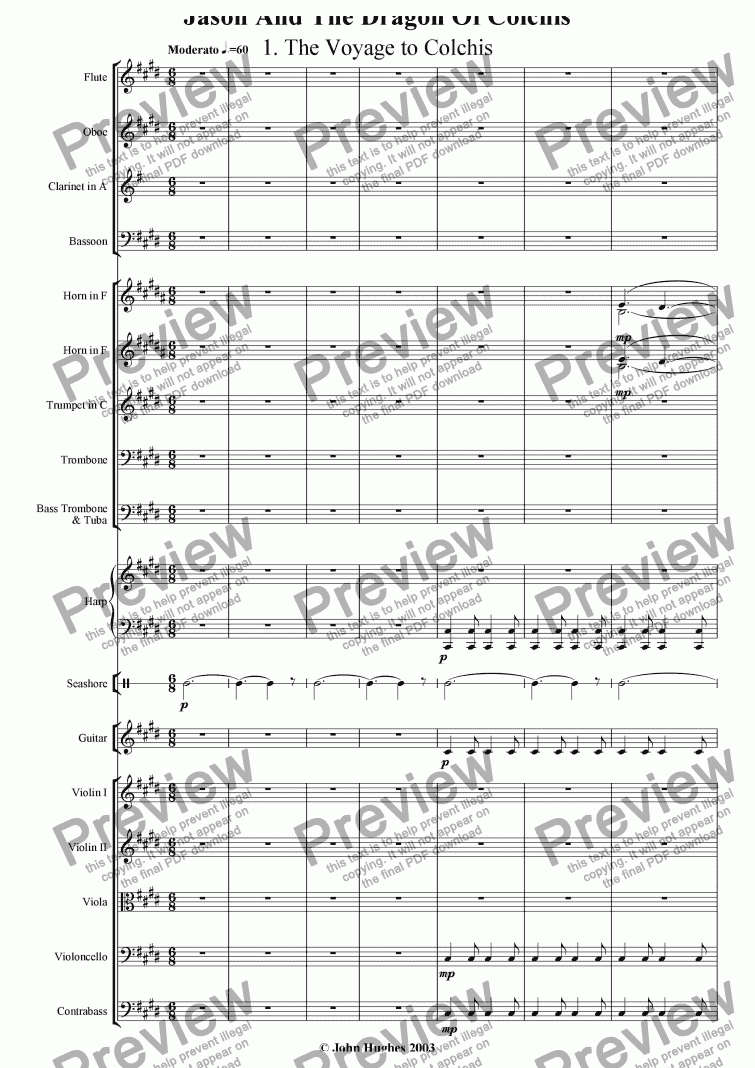 Jason And The Dragon of Colchis - Part 1

By: John Hughes
For: Orchestra

Composer
John Hughes
Lyricist
none
Difficulty
Difficult (Grades 7+)
Duration
8 minutes
Genre
Classical music
License details
For anything not permitted by the above licence then you should contact the publisher first to obtain permission.

Incidental music for one of four "Dragon Stories" composed for a talking books project that never happened, this is the well known story of Jason and the Argonauts and their quest to find the golden fleece. I've put together the first four cues as follows:

1) The Voyage to Colchis. The opening depicts Jason and his fellow adventurers on board their ship, The Argo, sailing aimlessly and despondently, not knowing where to find find the golden fleece. Then one day they are told that the King of Colchis has the fleece. The mood brightens, Jason calls out "Set sail for Colchis!", and the voyage begins.

2) Hospitality & Jason and the Princess Fall In Love. The King of Colchis wines and dines Jason and the Argonauts, lulling them into a false sense of security, intending to kill them in the night. It'a a bit like Ancient Greek restaurant musak. Meanwhile Jason fancies the King's daughter, Princess Medea, and she fancies him back - and guess what … they fall in love!

3) The Warning. Princess Medea warns Jason of the King's true intentions and so they avoid nocturnal death. She also tells him he must fight a giant bull and then an army of skeleton soldiers in order to claim the fleece.

4) March To The Field Next morning Jason and his men march out to the field where battle will commence.

Reviews of Jason And The Dragon of Colchis - Part 1

Sorry, there's no reviews of this score yet. Please .
In order to submit this score to ScoreExchange.com John Hughes has declared that they own the copyright to this work in its entirety or that they have been granted permission from the copyright holder to use their work. If you believe that this score should be not available here because it infringes your or someone elses copyright, please report this score using the copyright abuse form.