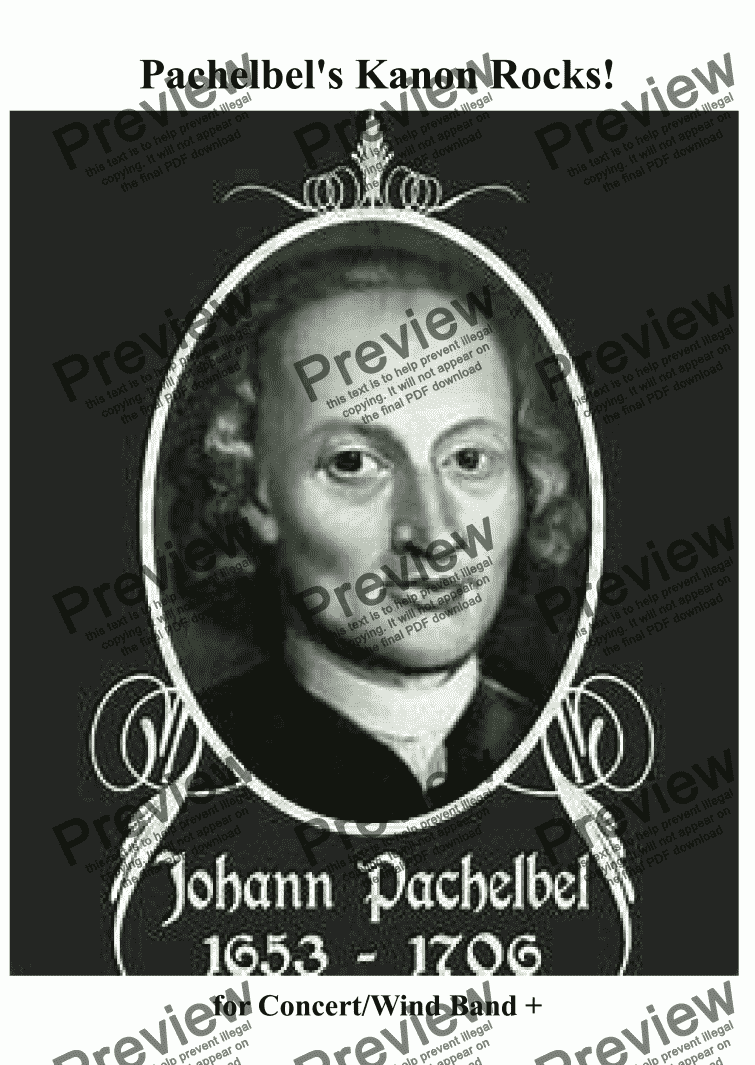 Composer
Johann Pachelbel (1653-1706)
Year of composition
1680
Arranger
Keith Terrett
Year of arrangement
2014
Publisher
Music for all Occasions
Difficulty
Difficult (Grades 7+)
Duration
7 minutes
Genre
Rock and Pop music
License details
For anything not permitted by the above licence then you should contact the publisher first to obtain permission.

Pachelbel’s Kanon arranged for Concert Band, with additional keyboard & guitar parts; to enable you and your band to really rock it! A great arrangement for your next band performance.

Pachelbel's Canon is the common name for an accompanied canon by the German Baroque composer Johann Pachelbel in his Canon and Gigue for 3 violins and basso continuo (German: Kanon und Gigue für 3 Violinen mit Generalbaß) (PWC 37, T. 337, PC 358), sometimes referred to as Canon and Gigue in D or Canon in D. Neither the date nor the circumstances of its composition are known (suggested dates range from 1680 to 1706), and the oldest surviving manuscript copy of the piece dates from the 19th century.

Pachelbel's Canon, like his other works, although popular during his lifetime, went out of style, and remained in obscurity for centuries. A 1968 arrangement and recording of it by the Jean-François Paillard chamber orchestra gained popularity over the next decade, and in the 1970s the piece began to be recorded by many ensembles; by the early 1980s its presence as background music was deemed inescapable.[1] From the 1970s to the late 2010s, elements of the piece, especially its chord progression, were used in a variety of pop songs. Since the 1980s, it has also been used frequently in weddings and funeral ceremonies in the Western world.

The canon was originally scored for three violins and basso continuo and paired with a gigue. Both movements are in the key of D major. Although a true canon at the unison in three parts, it also has elements of a chaconne.

In his lifetime, Pachelbel was renowned for his organ and other keyboard music, whereas today he is also recognized as an important composer of church and chamber music. Little of his chamber music survives, however. Only Musikalische Ergötzung—a collection of partitas published during Pachelbel's lifetime—is known, apart from a few isolated pieces in manuscripts. The Canon and Gigue in D major is one such piece. A single 19th-century manuscript copy of them survives, Mus.MS 16481/8 in the Berlin State Library. It contains two more chamber suites. Another copy, previously in Hochschule der Künste in Berlin, is now lost.

The circumstances of the piece's composition are wholly unknown. Hans-Joachim Schulze, writing in 1985, suggested that the piece may have been composed for Johann Christoph Bach's wedding, on 23 October 1694, which Pachelbel attended. Johann Ambrosius Bach, Pachelbel, and other friends and family provided music for the occasion. Johann Christoph Bach, the oldest brother of Johann Sebastian Bach, was a pupil of Pachelbel. Another scholar, Charles E. Brewer, investigated a variety of possible connections between Pachelbel's and Heinrich Biber's published chamber music. His research indicated that the Canon may have been composed as a kind of "answer" to a chaconne with canonic elements which Biber published as part of Partia III of Harmonia artificioso-ariosa. That would indicate that Pachelbel's piece cannot be dated earlier than 1696—the year of publication of Biber's collection. Other versions are occasionally put forward, for example, suggesting the date of the Canon's composition as early as 1680.