By: James James (1833-1902) Arranged by Keith Terrett
For: Wind quintet
This music is in your basket
View basket
Loading... 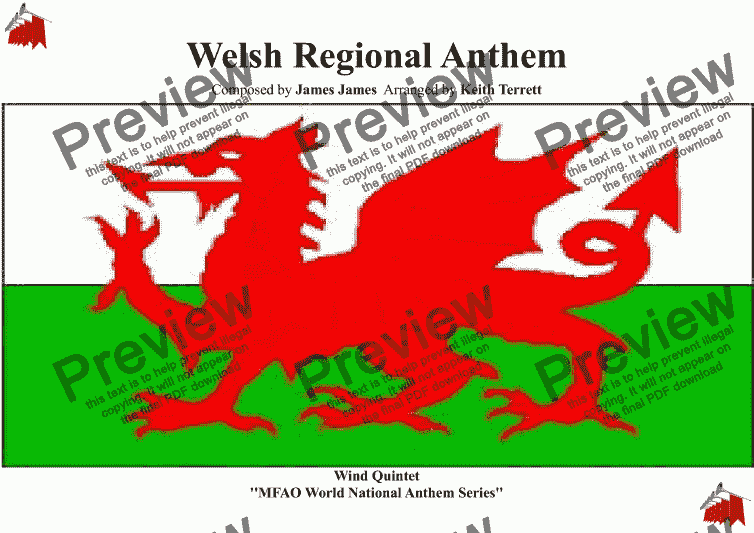 Composer
James James (1833-1902) Arranged by Keith Terrett
Arranger
Keith Terrett
Publisher
Music for all Occasions
Difficulty
Moderate (Grades 4-6)
Duration
2 minutes
Genre
Classical music
License details
For anything not permitted by the above licence then you should contact the publisher first to obtain permission.

An arrangement of the Welsh National Anthem for Wind Quintet.

Tradition has established Hen Wlad Fy Nhadau as an unofficial Welsh anthem since 1905, when it was first sung by fans at rugby games, although the official national anthem at the time was God Save the Prince of Wales. Hen Wlad Fy Nhadau slowly established itself as the more popular anthem over the next four decades, and was sung along with God Save the Prince of Wales and God Save the Queen before sporting events until 1975, when sports officials decided that "Hen Wlad Fy Nhadau" should be sung alone. Like other British anthems, it has not been established as a national anthem by law, but it has been used as a national anthem at official governmental ceremonies, including the opening of the Welsh Assembly, and at receptions of the British monarchy since the 1970s. It is recognised and used as an anthem at both national and local events in Wales.

Usually this will be the only anthem sung: only the first stanza and chorus are usually sung (and in the Welsh language). God Save the Queen, the national anthem of the United Kingdom, is sometimes played alongside Hen Wlad fy Nhadau during official events with a royal connection.

The existence of a separate national anthem for Wales has not always been apparent to those from outside the country. In 1993 the newly appointed Secretary of State for Wales John Redwood was embarrassingly videotaped opening and closing his mouth during a communal singing of the national anthem, clearly ignorant of the words but unable to mime convincingly; the pictures were frequently cited as evidence of his unsuitability for the post. According to John Major's autobiography, the first thing Redwood's successor William Hague said, on being appointed, was that he had better find someone to teach him the words. He found Ffion Jenkins, and later married her.

Versions of Hen Wlad fy Nhadau are used as anthems in both Cornwall, as Bro Goth Agan Tasow, and Brittany, as Bro Gozh ma Zadoù.