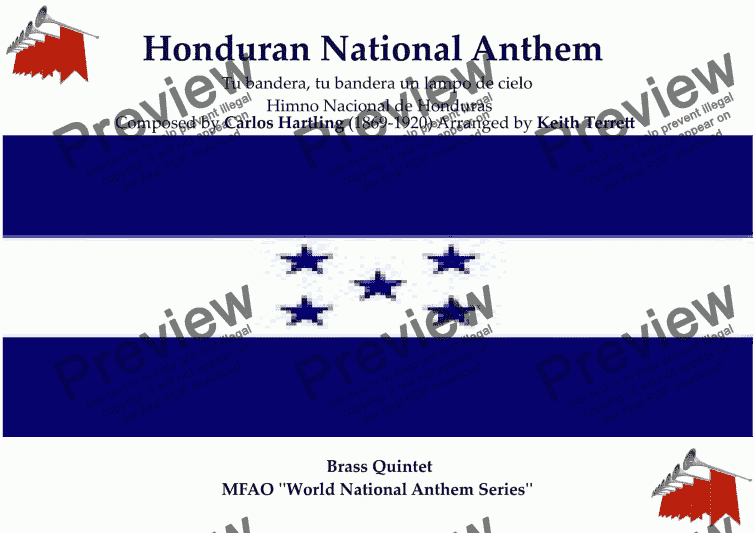 The "National Anthem of Honduras" arranged here for Brass Quintet (Spanish Himno Nacional de Honduras); was adopted under presidential decree 42 in 1915.[1] The lyrics were written by Augusto Constancio Coello and the music composed by Carlos Hartling.

In its entirety, the anthem is a brief chronology of Honduran history. The anthem consists of the chorus and seven verses. For official acts, only the chorus and the seventh are sung. The chorus, which is sung before and after the seventh verse, is a description of Honduras’ chief national symbols, the flag and the coat of arms. The eighth verse, is a patriotic call to duty to Hondurans to defend the flag and the nation.

By the time Hondurans complete their sixth year of elementary education, they will have memorized and been taught the meaning of all eight verses. Unofficially, the anthem is sometimes called "Tu bandera es un lampo de cielo" (Spanish for "Your flag is a splendor of sky") which is also the first line of the chorus. For Graduations in middle school, High school, University, or another type of graduation, an exam will be done based on a questionnaire of the National Anthem.

Carlos Hartling (2 September 1869 – 1920) was a German-born composer from Honduras, who composed the music for the National Anthem of Honduras, adopted as the country’s national anthem in 1915. Their parents were Georg Friedrich Hartlíng and Johanne Henriete Wilhemine Hartling. He realized his studies in the Weimar and Leipzing Conservatory. In September 1896, he went to Tegucigalpa because of a contract on 27 June 1896 to be a Music teacher, and a Band teacher. He sang for the first time on 23 September. In 1903, he received the honor to write the music of a poem written by Augusto Cesar Coello Ramos. He was married to Guadalupe Ferrari Guardiola. Since the second administration of the General Manuel Bonilla in February 1912, the lyrics and the music was popularized and was sung in every official act. 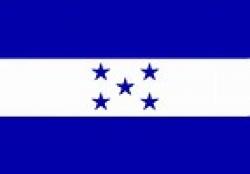