By: By Benjamin Sajo (2011)
For: Choir
This music is in your basket
View basket
Loading... 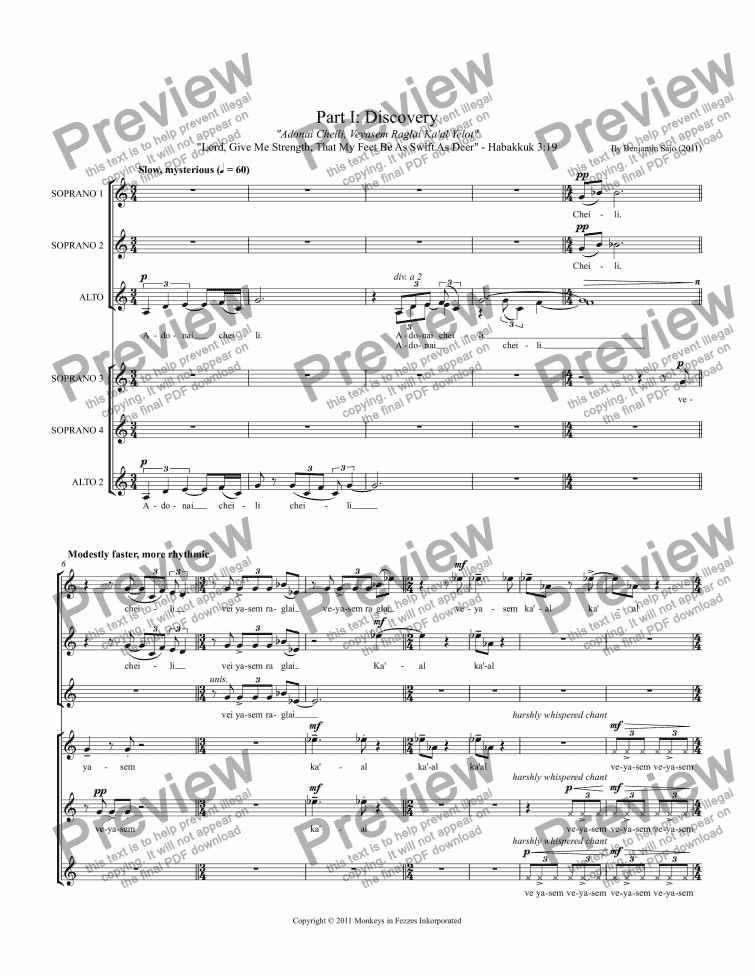 Composer
By Benjamin Sajo (2011)
Year of composition
2008
Publisher
Benjamin Sajo
Difficulty
Difficult (Grades 7+)
Duration
9 minutes
Genre
Modern classical music
License details
For anything not permitted by the above licence then you should contact the publisher first to obtain permission.

Performance Instructions: The two choirs should be physically separate from one another, but their spacing in the hall is unspecified. Possible organizations include, but are not limited to, having the choirs surround the audience, or have one onstage and one offstage. Program notes: In 1940s France, four teenagers and a dog fell into a mystery, unearthing neolithic paintings of animals over ten thousand years old shaped to the contours of the stone. No images of landscape, just the beasts that primitive Man revered and hunted; halls of bulls, felines, and other grand examples of megafauna. The inhabitants even left their own abstract marks on the wall, and stylized humanoid shapes. The caves of Lascaux evoke a silent reverence in the dark. What did these paintings represent? Trophies? The rites of passage of young hunters? Fertility metaphors? Shamanic visions? Star charts? Flights of fancy? We can nonetheless see in these works the evident creative faculties of our ancestors, prior to farming, cities, and metallurgy. Yet our modern viewing of these treasures comes at a price: the caves of Lascaux are now closed off to the public, for in our breath and the outside world arrives moisture and molds threatening the immaculate images. In this case, one could imagine the situation to be an invasion from the New World upon the Old. For the Homage to Lascaux, I chose unaccompanied female voices to counter the hunter images, challenging the hunters’ quests for death with the feminine promise and desire for life, and perhaps imply that it is the animal spirits – the Muses - on the wall, who sing. Let us not forget that the ancient goddesses also ruled over war, death, and destruction. Man hunted, and prayed for the soul he hunted Modern instruments accompanying the choirs would inappropriately stand between the viewer and the images evoked by the music. A traditional tonal language would be corny and full of platitudes regarding the beyond-ancient subject matter, similarly as if I were to literally evoke primitive chanting from a UNESCO recording. Instead of these methods, I first composed a melody containing all twelve chromatic tones, with themes and motifs intertwining freely using some principles of tonality with “atonality”, evoking a paradoxical “lyrical intensity and purpose” with an impersonal transcendence of spiritual Order, both united by human instinct. Textual Sources: I have chosen to compose in three traditionally sacred languages of the past two to three thousand years – eons since the paintings, but still distant from most of us. In Hebrew, Latin, and Sanskrit: "Adonai Cheili, Veyasem Raglai Ka’al Yelot" ("Lord, Give Me Strength, That My Feet Be As Swift As Deer") - Habakkuk 3:19 "Hic Iacet Corpus Mundi, Cuius Animam In Inferno Est Iacam" ("Here lies the body of this world, whose soul alas to Hell is hurled.") – Henry David Thoreau’s Epitaph of the World, translated into Latin from English by Lynn Kozak "Aum Ma Asato Masad Gamaya" "From The Unreal, Lead Me To The Real" - Brihad Aranyaka Upanishad 1.3.28

Reviews of Homage to Lascaux