By: Joel Jacklich (A.S.C.A.P.)
For: Orchestra
This music is in your basket
View basket
Loading... 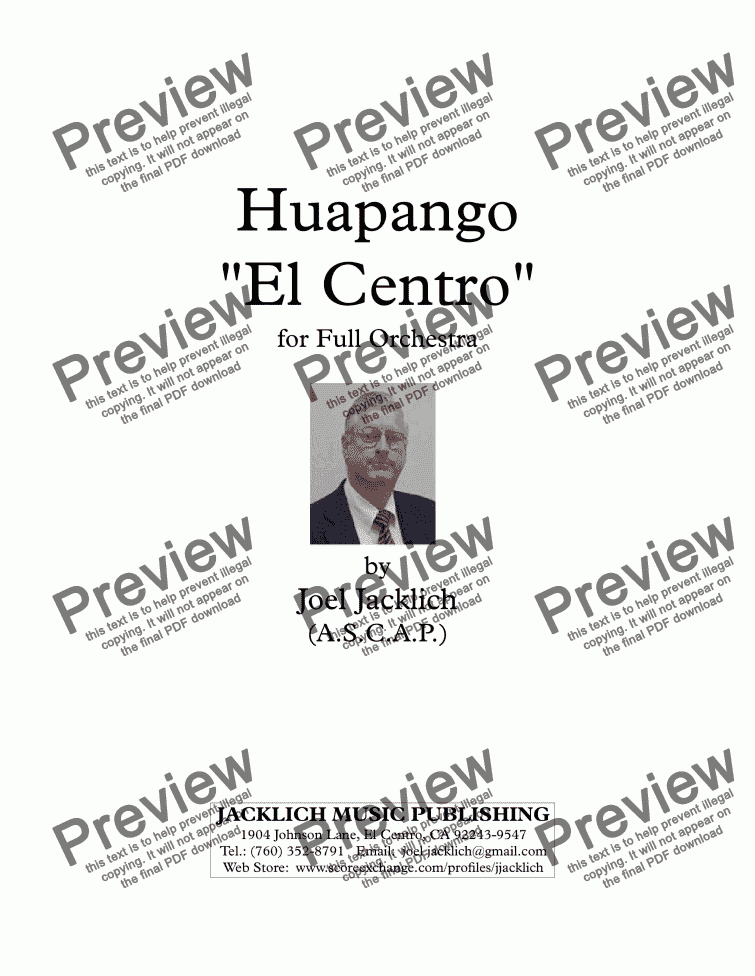 Composer
Joel Jacklich (A.S.C.A.P.)
Year of composition
2014
Publisher
Jacklich Music Publishing
Difficulty
Difficult (Grades 7+)
Duration
4 minutes
Genre
Latin music
License details
For anything not permitted by the above licence then you should contact the publisher first to obtain permission.

A huapango is a traditional Mexican folk dance with juxtaposed meters of 3/4 and 6/8. The word may be a corruption of the Nahuatl word cuauhpanco that literally means "on top of the wood," alluding to a wooden platform on which dancers can make their quick zapateado dance steps. Much like the steps of flamenco dancers, these heel clicks are not just part of the dance but are actually considered a part of the musical composition itself. Left-hand finger-tapping on cello tops, representing the staccato of dancers' heel clicks, and violins strummed guitar style all come together in a Norteno-style huapango. A little about the origin of this particular composition: Over the years I had written a number of arrangement and original compositions for the Mitch Sturman, director of the Wilson Junior High School Band in El Centro, California. I was approached in September, 2014, by Marissa Gohl, director of the Wilson’s string orchestra at the suggestion of Wilson’s new principal, who, after seeing a video of Gustavo Dudamel leading the Simon Bolivar Youth Orchestra of Venezuela in Leonard Bernstein’s Mambo (their signature concert ender), said to Ms. Gohl, “Our orchestra needs a signature piece like that. I like the sound of a huapango. Do you think Mr. Jacklich could write us one?” After thinking about the request, and searching out some examples of huapangos for reference, I began writing, and finished the rough draft of the string orchestra piece in just two days. At that time the score for the string orchestra version was basically complete except for a few revisions done over the next few weeks. In November, 2014, a full orchestra version was also written keeping the string parts exactly the same, but adding the colors of the full orchestra. The full orchestra version is written for piccolo; pairs of flutes, oboes, clarinets in A, bassoons, four French horns, two trumpets in C, three trombones, tuba, timpani, snare drum, bass drum, suspended cymbals, claves, castanets, harp, and strings (8, 8, 6, 6, 3). The full orchestra version was premiered by the Imperial Valley Symphony at the Jimmie Cannon Performing Arts Theater in El Centro, California, on November 7, 2015, conducted by the composer. Although the piece is written for clarinets in A and trumpets in C (on which instruments the music more naturally flows), parts in B-flat for both clarinets and trumpets are also provided.