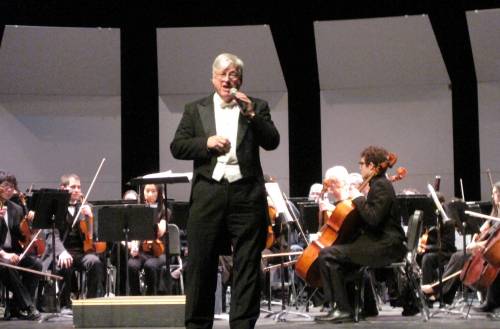 Joel Jacklich graduated from Western Michigan University in 1970 with a Bachelor of Music, cum laude, majoring in Music Education and with minors in Music Theory and Applied Music (Viola). He then graduated from the School of Performing Arts, United States International University in 1980, with a Master of Fine Arts in Orchestral Conducting. He is currently music director/conductor of the Imperial Valley Symphony (1974-Present), and after thirty-five years in education recently retired from Imperial Valley College (CA) as Professor Emeritus where he had been the head of the music department (1989-2006). There he received the Rafael Santos Award as IVC's Outstanding California Community College Professor (2006), the Academic Senate's Outstanding Faculty Award (1996), and the President's Distinguished Service Award (1991). He was also a lecturer in music at San Diego State University-Imperial Valley Campus (from 1988). He formerly taught music, English, and E.S.L. at Central Union High School in El Centro, CA (1974-89), was the music director/conductor of the Yuma Community Orchestra (AZ) (1985-87), and associate professor of music at Arizona Western College (1985-87). For the past thirty years he has served as an adjudicator for the Music Teachers' Association of California, and recently for ASTACAP. He is in demand as a clinician and guest conductor. An active chamber musician, he is constantly switching hats as violinist/violist/arranger for the Imperial Valley String Quartet (1974-Present).

Most of the music on this site consists of arrangements for string quartet. If need for an arrangement comes up that can't be found here (and whose source is in the public domain, or for which copyright clearance can be obtained), drop an email to joel.jacklich@imperial.edu with a word or two about exactly what is needed and a new arrangement that can be posted here may soon find its way to scoreechange.com.