From Bethlehem in Judah (Christmas hymn)

By: Mary Rose Jensen
For: Choir
This music is in your basket
View basket
Loading... 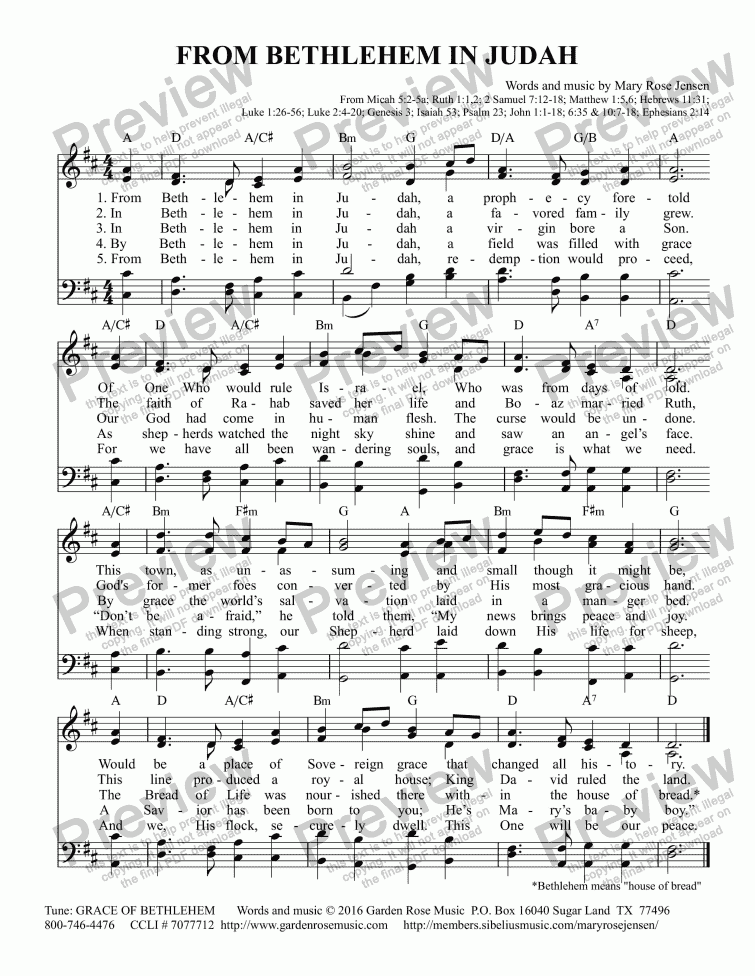 From Bethlehem in Judah (Christmas hymn)

By: Mary Rose Jensen
For: Choir

A Christmas hymn about Bethlehem. In a "Lessons and Carols" service, this would be a good match for the Micah prophecy that is often used as one of the texts (Micah 5:2-5a). The mention of grace in each verse is deliberate.

The lyrics to this hymn are inspired by Nancy Guthrie's Bible studies on seeing Jesus in the Old Testament - especially her writing on the book of Ruth.

Scripture references are included for many of the major ideas in this hymn. The Micah verses are the starting and ending place. There is a reference to the seed line, which began in Genesis (with the prophecy of Genesis 3:15) and goes through Abraham, Judah, David etc. until Jesus was born. Of special note in this hymn is the inclusion of Rahab and Ruth, women who were not Israelites, and in fact were from nations that were enemies of Israel. Samuel prophesied that David's house would be established forever, and that promise was mentioned in Mary's song (often called The Magnificat) in Luke 1. Those who believe in Jesus are now members of that house, as the heirs and children of God (John 1:12). The curse that is being undone is the same one we all sing about every Christmas in the hymn, "Joy to the World." While effects of the Fall still trouble the earth, Jesus is in the process of reversing these sorrows, e.g. as God gives people wisdom to cure disease and make the ground more productive. And the worst effects of the Fall, the separation from God and death, are now over for believers. We can enter His presence (as seen in the tearing of the veil in the temple) and we will live forever. And it is all because Jesus, our Good Shepherd, the Creator and Sustainer of the universe, voluntarily allowed Himself to be tortured and murdered for the salvation of His rebellious and foolish sheep. As predicted in Micah 5:4, He was not crucified because of weakness or defeat, but because of His love for His flock. And throughout scripture, including Micah 5:5, Luke 2:14 and Ephesians 2:14, we are assured that we can have peace with God and with each other because of Jesus - because of Who He is (God, the second person of the Trinity) and what Has done for us (Christ has died, risen from the dead, and ascended into heaven). I am thankful.

Christ Came (Consider Christ), From Bethlehem in Judah(Chistmas choral anthem, for SATB a cappella choir), Christmas Angels (The Angel of the Lord) Christmas Carol, Once There Was a Garden (NOEL NOUVELET) Advent Hymn , The Word, In the Beginning (BRETON CAROL) SATB hymn from John 1 - Advent, Trinity, Come to the Child (COVENTRY CAROL) Christmas/Epiphany, What Happened in Bethlehem (Christmas) LONGHORN CAROL, Who Will God Send to Us? (Advent Hymn), God Promised a Son (WEXFORD CAROL) Advent Hymn (SATB), Tell of Joy (Christmas Carol), The Angel Gabriel (GABRIEL’S MESSAGE) From Luke 1:26-38 (The Annunciation) Advent Hymn and Child of Mary (Christmas Hymn)

Reviews of From Bethlehem in Judah (Christmas hymn)

Sorry, there's no reviews of this score yet. Please .
In order to submit this score to ScoreExchange.com Mary Rose Jensen has declared that they own the copyright to this work in its entirety or that they have been granted permission from the copyright holder to use their work. If you believe that this score should be not available here because it infringes your or someone elses copyright, please report this score using the copyright abuse form.