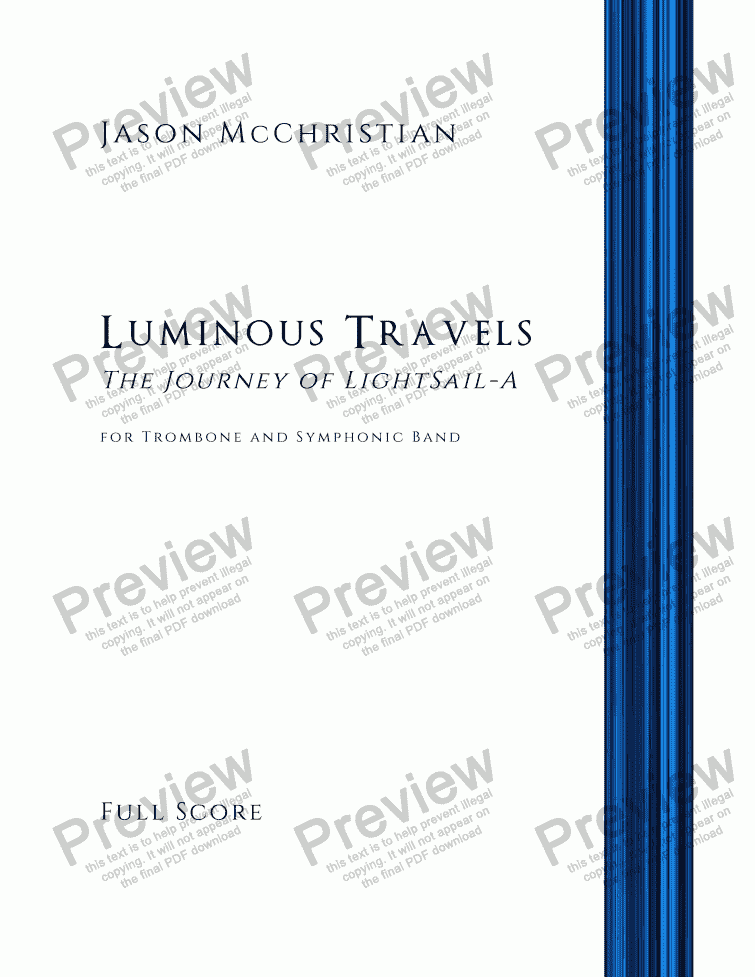 Price:
(+ VAT when applicable. Price is for score onlyPrice is for score and complete set of 33 parts)
Note: The publisher requires a minimum purchase of 1 licenses
Change currency...
You are purchasing high quality sheet music PDF files suitable for printing. You are purchasing a this music. Be sure to purchase the number of copies that you require, as the number of prints allowed is restricted.

In May 2015, a solar sail was launched into space by the publicly funded organization The Planetary Society. The construction of the sail consisted of a box the size of a loaf of bread (known as a CubeSat), metal booms, and four incredibly thin triangular Mylar sails. The vehicle was propelled by light from the Sun and in future projects; the sail would continue to gain momentum, ultimately accelerating to high speeds, allowing for travel along limitless distances.

Luminous Travels - The Journey of LightSail-A tells the account of this space-faring vessel in four major musical scenes. The first scene, UNFOLDING, features a lyrical melody first heard on the solo trombone then carried off by of the ensemble. The second scene, COMPUTING, depicts the inner-workings of the CubeSat. This new theme is rhythmic and aggressive, suggesting the hazards to come. The third scene, BLACKOUT, represents the communication blackouts that occurred during the flight that left the project in peril. This scene marks the cadenza of the work and depicts the lonely and frigid environment of space. Eventually, the unease is assuaged bringing hope back to the project. With a new sense of optimism, the final scene, ACCELERATING, represents the increase in speed that will occur in future solar sail space projects. The music from the earlier sections returns and changes, and as the music presses forward; the solo trombone rises into its highest register at breakneck speed as the solar sail crosses along infinite space.

The piece is dedicated to Keith Hunter, who has been a champion of my music and for whom Luminous Travels is dedicated.

In order to submit this score to ScoreExchange.com Jason McChristian has declared that they own the copyright to this work in its entirety or that they have been granted permission from the copyright holder to use their work. If you believe that this score should be not available here because it infringes your or someone elses copyright, please report this score using the copyright abuse form. 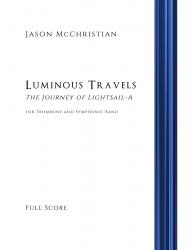