A Breeze from Alabama Cornet Part in Bb 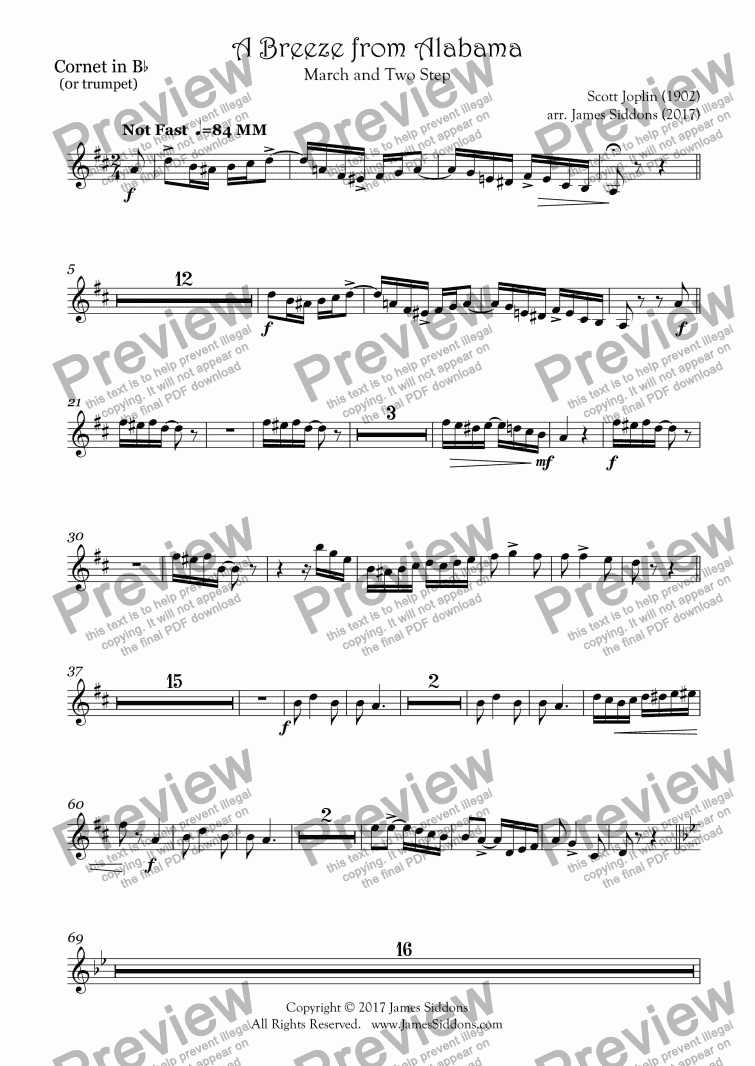 Although published as a piano solo (1902), "A Breeze from Alabama" is subtitled "March and Two Step" and has a dedication on the cover to P. G. Lowery (Perry George Lowery, 1871-1942), "World's Challenging Colored Cornetist and Band Master." Thus, A Breeze from Alabama may well have been conceived as a march for military band but published only as a piano solo. No band arrangement by Joplin is known to exist, but Joplin could have done this, as he himself was a cornetist as well as pianist, and had played cornet in bands like Lowery's many times. Drawing on this information, the present arrangement by James Siddons (2017) is based on the following assumptions: 1. A Breeze from Alabama originated as a march (in march-trio form) for military band. 2. The 1902 publication is a piano reduction of that band work. The melodic lines intended for cornet solo are generally discernable in the piano reduction. 3. A setting for piano duet (or ensemble) keeps this work in the tradition of ragtime piano while also emulating the fulsome tone colors of brass instruments to a degree that a solo piano cannot do. Thus this arrangement is not a solo-and-accompaniment setting, but a setting for large ensemble with soloist. It is collaborative music, akin to a concerto. 4. In the years around 1902, Joplin was thinking of his music as a high art form comparable to European classical music. Joplin had studied music in college. He was, presumably, searching for ways (new compositions) in which to combine classical forms and harmonic practices with American styles (especially marches and ragtime). 5. From the viewpoint of the foregoing assumptions, "A Breeze from Alabama" may be seen to follow this diagram:

Introduction: ms. 1-4 Themes A and B are the march themes of a march-trio form, or the first and second themes of a sonata-allegro form (double-exposition concerto). Theme C is not typical of march-trio form (including ragtime), but this theme and its chord progression resemble the development in sonata-allegro form. As with a concerto, a cadenza is performed at the end of this section. The cadenza in this arrangement is by James Siddons. Themes D and B' are the trio themes of a march-trio form, or the recapitulation of a sonata-allegro form, returning the B theme but not the A theme, and placing the D theme in the subdominant, as marches and piano rags did. It is the B theme that returns the tonic of C major. There are bridges leading to both of these themes.

Note: Joplin, according to his publisher, described the chord progressions in Theme C as "a story in transitions." Joplin probably meant 'a study in transitions'; 'transitions' meant modulations or changes of tonality in music textbooks a century ago.

In order to submit this score to ScoreExchange.com James Siddons has declared that they own the copyright to this work in its entirety or that they have been granted permission from the copyright holder to use their work. If you believe that this score should be not available here because it infringes your or someone elses copyright, please report this score using the copyright abuse form. 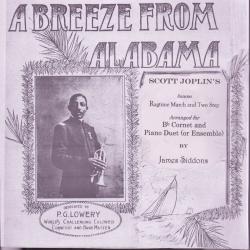 Reviews of A Breeze from Alabama Cornet Part in Bb