By: Mike Lyons
For: Brass quartet
This music is in your basket
View basket
Loading... 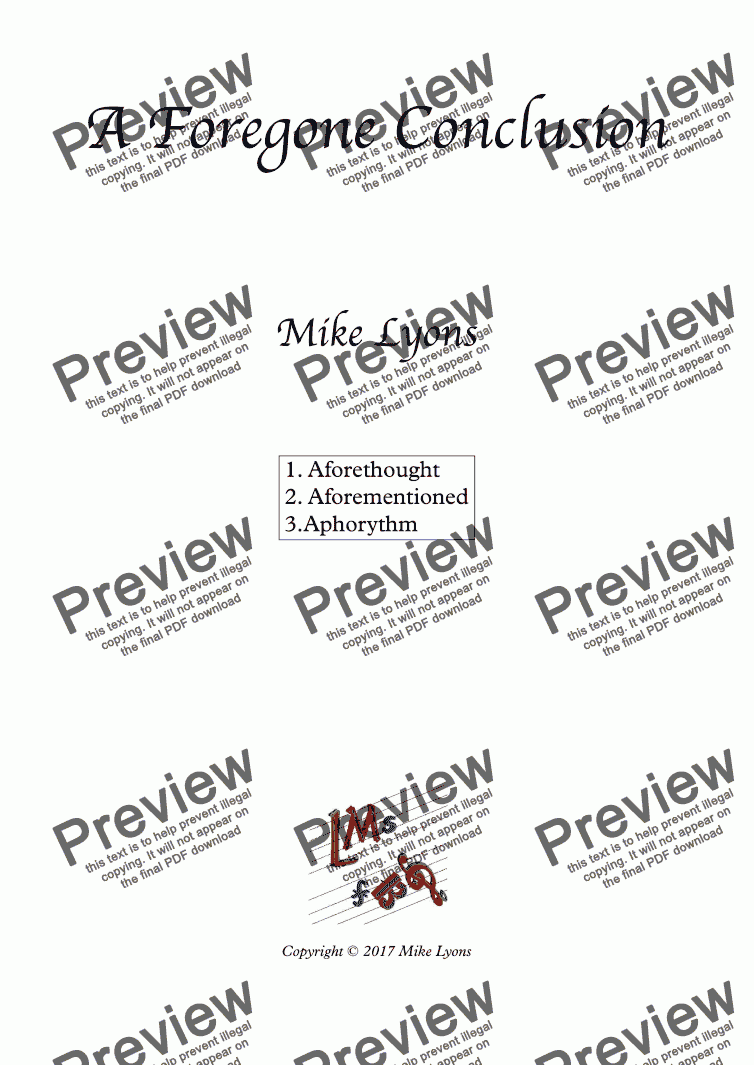 By: Mike Lyons
For: Brass quartet

Composer
Mike Lyons
Year of composition
2018
Arranger
Mike Lyons
Difficulty
Difficult (Grades 7+)
Duration
6 minutes
Genre
Modern classical music
License details
For anything not permitted by the above licence then you should contact the publisher first to obtain permission.

It was written as a submission for a new brass quartet (A4 Brass Quartet) comprising musicians from the RNCM, but didn't get selected. Each movement is based on the ensemble's name and contains a pun on A4. Each movement also has fourths involved in it somewhere.

The first movement is called "Aforethought" (because it contains my initial ideas) and it uses a mixture of tonal and quartal harmonies. Melodies and harmony are based around fourths and fifths. It requires all players to be able to flutter-tongue. After the opening fanfare, there is a march-like melody on the cornet, accompanied by the rest of the ensemble. This is followed by a contrasting tune using intervals of a fourth. These ideas are developed over several keys until the first march-like melody returns. The fanfare idea closes the movement.

The second movement is called "Aforementioned". It takes its ideas from the first movement, but gives them a bluesy style. The cornet player changes to the flugelhorn for this movement which has a beautiful languid melody. The horn shares some of the glory towards the end.

The third and final movement is called "Aphorhythm" (A4 rhythm) and is in 7/8 time. The jerky little melody plays with the pulse of the 7/8 and smoothly morphs into a steadier 'middle 8' section before reprising the opening music.

Altogether, this is an enjoyable and exciting piece for brass quartet.