By: Claudio Monteverdi
For: Brass choir
This music is in your basket
View basket
Loading... 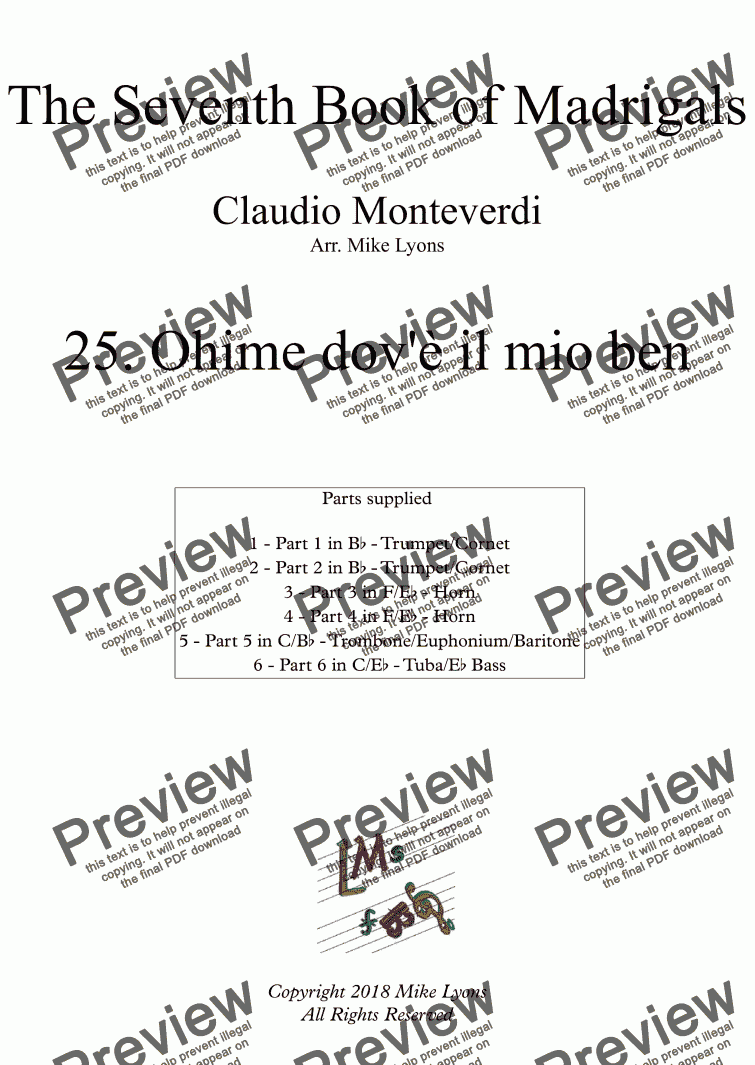 By: Claudio Monteverdi
For: Brass choir

Composer
Claudio Monteverdi
Year of composition
1619
Arranger
Mike Lyons
Year of arrangement
2018
Difficulty
Moderate (Grades 4-6)
Duration
6 minutes
Genre
Classical music
License details
For anything not permitted by the above licence then you should contact the publisher first to obtain permission.

At long last I have nearly finished the 7th book. This book has posed some issues as it is such complex music it is almost impossible to cut it down to 5 parts while maintaining its integrity. As a result, some songs will be in 6 or more parts.

Here is a group of four very short songs for soprano duet with continuo. I have arranged them as a duet for trumpet/cornet with a four part accompaniment.

The four songs are related under the commone title "Ohimè, dov'è il mio ben" but each also has a title of its own:

1. Romanesca a 2 (This is the subtitle. A romanesca was a musical formula characterised by a falling sequence of 5 notes and with a fixed harmonic progression.) The text translates as "Alas, where is my beloved?" 2. Dunque ha potuto sol desio d'onore - "Can it be that love of honour…" 3. Dunque ha potuto in me, più che il mio amore - "Can it be that ambition and vainglory…" 4. Ahi, sciocco mondo - "Alas, foolish blind world"

Each song is a setting of a pair of couplets which together form the whole poem, which is why I have collected them together here. Besides, on their own, each is too short.

Here also is evidence of Monteverdi's progress in telling a story through music.

These four songs work beautifully on brass, with gorgeous suspensions and resolutions and well directed rhythmic drive from the accompaniment.

The seventh book is quite a change from the earlier ones. Monteverdi seems to be concentrating on developing solos and duets, trios and small accompanied ensembles. The accompaniments are often written out with more than just long note chords. The intricate instrumental parts are more than just filling in the harmony (hence the difficulty in paring them down.)

Once again, these songs are exquisitely crafted and travel well onto brass.﻿

Parts are supplied as follows: