By: Tjako Van Schie
For: String orchestra
This music is in your basket
View basket
Loading... 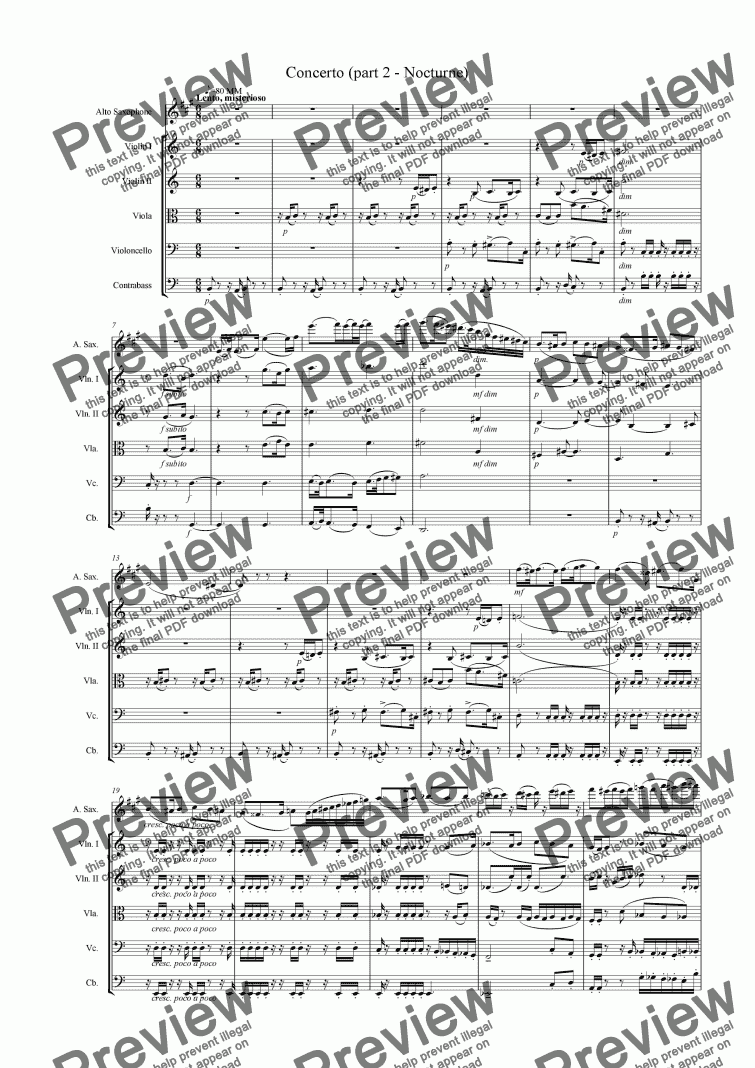 Composer
Tjako Van Schie
Year of composition
2003
Lyricist
none
Publisher
-
Difficulty
Difficult (Grades 7+)
Duration
4 minutes
Genre
Modern classical music
License details
For anything not permitted by the above licence then you should contact the publisher first to obtain permission.

Spring 2003 I had some interesting conversations and nice days with my friend Romeu Costa, whom I know from my work in Porto, Portugal. He is a gifted saxophone player and his honest and intelligent musicianship inspired me to write this piece especially for him. The piece is based upon 3 characteristical movements. Discussions The first movement introduces all items to discuss, at first evenly spread amongst all players. The musical language is kept simple and is based on quite solid traditions, which become ?infected? with more or less ?modern? or questionable elements. (Is the theme a 4/4 bar indeed? Why are there additive elements, like ?sequenzas? of repetitive notes? And why are those sequenzas not always explainable? Why does the comes not respond in a tonal way to the dux? Where do the dissonant chords originate? Why does the movement end in a rather percussive way, where it starts more or less melodically?) The way of writing however is quite ?classical?. The piece starts with a fugue-like introduction, where the main elements of motifs and the theme are introduced. As the saxophone starts participating in the debate he grabs elemnts from the introduction and elaborates on all arguments. In a highly energetic way the piece evolves towards the end, where common elements are heared over and over again. I think the debate ends undecided. Nocturne In the second movement the main element of the first part (the second interval) is dissolved from the theme and gets its own life in a dreamy, expressive and a bit more tonal world. The emotion felt here can be described as deep, mysterious, underground. In the short but intense climax all players loose their mind and get furious, and strangled in a nightmare. After this horror part the theme has undergone a kind of metamorphosis, ans the intervals are not the same anymore. Rondo giocoso The third part is the part where joy and ordinary life takes over again. A ragtime, dance-like movement. No important arguments here, but shere fun (besides maybe the strange-feeling morbid cadenza near the end). But in the underlaying composition of the theme also here we find small almost unnoticeable ?mutilations? to the themes and intervals, as in real life, where no two days are the same, or where no two trees have similar branches. I tried to look in which way a theme can be altered without major consequences for listeners, like with shifts in metre, melodical alterations, dissonance where one would feel consonance is required, small quotes from ?known? music. (When is a motif a quote anyway?)

The duration of the piece is approximately 13 minutes and 45 seconds. The piece preferably is performed with string orchestra or string quintett. A piano reduction is available but not suitable for life performance.

Reviews of Concerto for Alto Saxophone and Strings part 2: Nocturne

Sorry, there's no reviews of this score yet. Please .
In order to submit this score to ScoreExchange.com Tjako Van Schie has declared that they own the copyright to this work in its entirety or that they have been granted permission from the copyright holder to use their work. If you believe that this score should be not available here because it infringes your or someone elses copyright, please report this score using the copyright abuse form.