By: Maurice Saylor
For: Voice + keyboard
This music is in your basket
View basket
Loading... 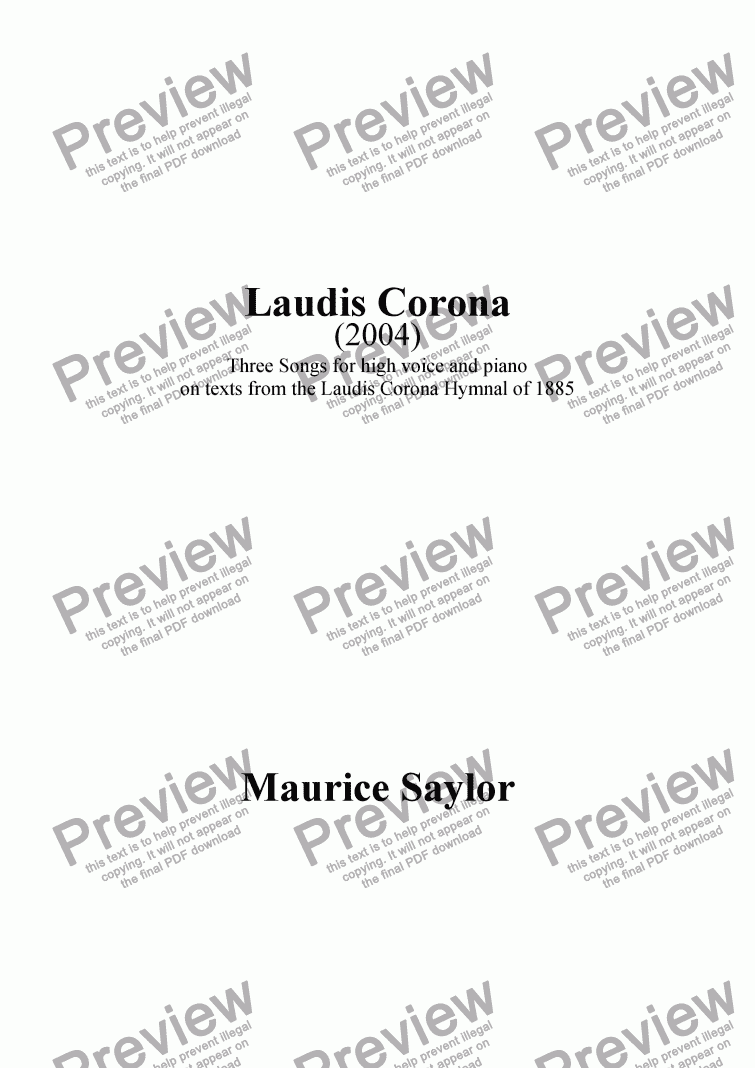 By: Maurice Saylor
For: Voice + keyboard

Composer
Maurice Saylor
Year of composition
2004
Lyricist
anon.
Difficulty
Moderate (Grades 4-6)
Duration
10 minutes
Genre
Classical music
License details
For anything not permitted by the above licence then you should contact the publisher first to obtain permission.

The challenge of setting these texts to new music was to respect the piety and devotion of the authors but at the same time to recognize the way that Christianity has changed and with it, the language used to express religious devotion. "And thou, dark fiend, six thousand years / The bride of Christ in vain tormenting, / Shall find our hate and scorn of thee / Deep as thine own, and unrelenting" Give that to your first-grade Sunday School Class!

These Hymn texts were written at a time when lofty language was the tradition. The composer has striven for settings which revel in the archaic phrases which sound purple to our ears but at the same time can be deeply moving. From the 146 hymns in Laudis Corona, three were painstakingly chosen. "Glorious Mother" was irresistible for the line, "Earth is darksome, we are weary, / Satan setteth snares for all."

Many of the major religious denominations published new hymnals in the 1980s and 1990s. Gender-exclusive language was revised, obsolete words and usages were updated to modern English, and some hymns with controversial subjects were taken out altogether. Such was the fate, for example, of "Onward, Christian Soldiers" in the Methodist hymnal, whose chorus reads: "Onward, Christian soldiers, / Marching as to war, / With the cross of Jesus / Going on before." Compared with "Christians! To the War!", those words are quite tame.

The text "Oh Beautiful Thou Art" is not attributed to an author; it seems to be a poetic English rendition of the traditional "Ave Maria" text. The new setting reflects the heartfelt devotion intended by the author.

The work was premiered by Rachel Barham and Deke Polifka. The MP3 recording is of their second performance recorded on September 27, 2004.

Sorry, there's no reviews of this score yet. Please .
In order to submit this score to ScoreExchange.com Maurice Saylor has declared that they own the copyright to this work in its entirety or that they have been granted permission from the copyright holder to use their work. If you believe that this score should be not available here because it infringes your or someone elses copyright, please report this score using the copyright abuse form.