By: Tony Matthews
For: Solo instrument (Piano)
This music is in your basket
View basket
Loading... 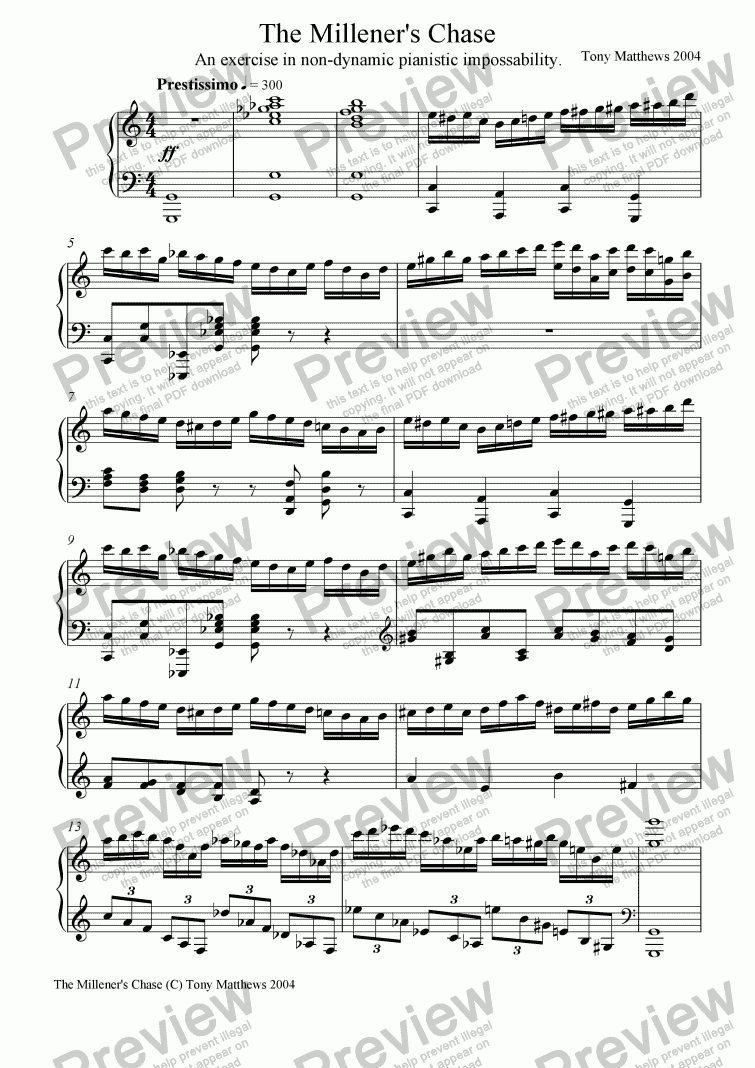 Composer
Tony Matthews
Year of composition
2004
Lyricist
none
Difficulty
Difficult (Grades 7+)
Duration
2 minutes
Genre
Modern classical music
License details
For anything not permitted by the above licence then you should contact the publisher first to obtain permission.

What can I say; this piece is impossible to play.

I was intrigued by another composer's idea that there is no point in putting emotion into a midi file because a computer can never play it back with emotion plus he made a point of making everything he writes impossible, even when he wants it played.

So I wrote this with the following rules in mind.

It must be impossible to play but, at the same time, be tonal and, at first glance, look playable There should only one dynamic - ff in this case The tempo should be rock steady, no rubato, accels or rits.

For those that know my work, this is a "bee in my bonnet" piece.

It was interesting exercise writing it as the absence of any of the typical emotion markings actually gave the piece its structure so much so that to put variations in tempo or dynamics would have resulted in a totally different work.

Note: There is actually some feel to the piece as some emotion is supplied by the "Espressivo" in the Sibelius Performance settings. I tried it with this turned off and it sounded dreadful; a tribute to the Sibelius Programmers indeed.

The Ballade of Grosso the Goth, The Seduction, Any old thing, Liszt Hungarian Rhapsody No.2 (C minor - F), Chopin: Prelude in E minor Op28 No.4 and The Drifter

Reviews of The Millener’s Chase

Sorry, there's no reviews of this score yet. Please .
In order to submit this score to ScoreExchange.com Tony Matthews has declared that they own the copyright to this work in its entirety or that they have been granted permission from the copyright holder to use their work. If you believe that this score should be not available here because it infringes your or someone elses copyright, please report this score using the copyright abuse form.