By: David Vaughan
For: Percussion ensemble
This music is in your basket
View basket
Loading... 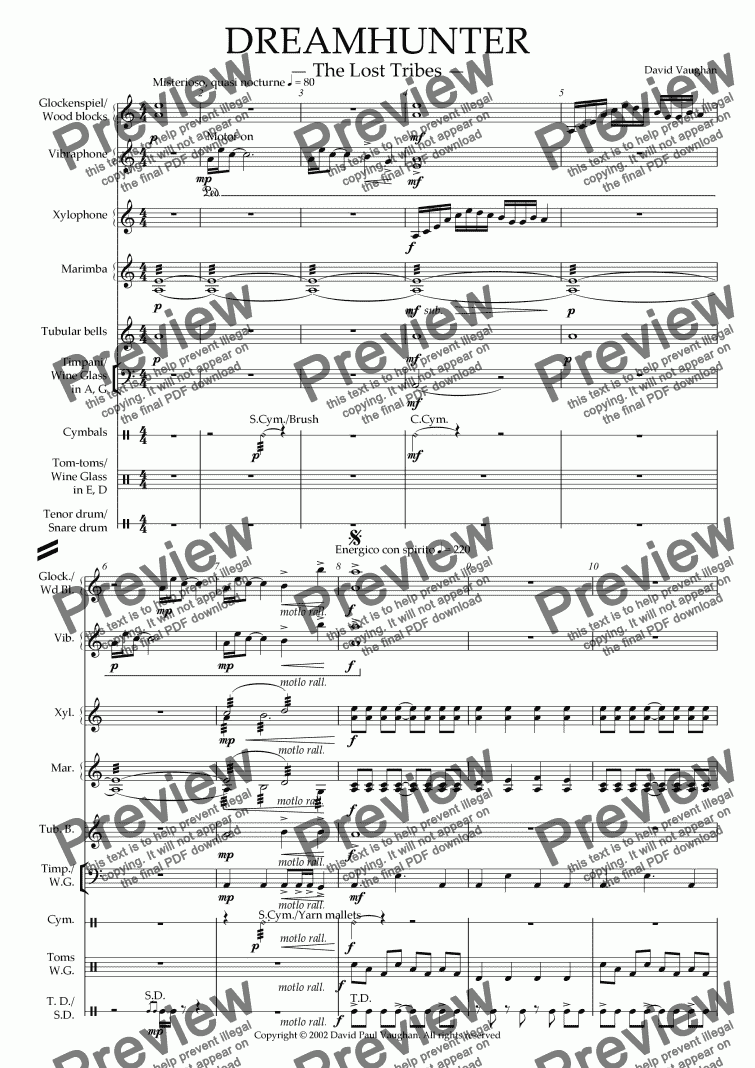 By: David Vaughan
For: Percussion ensemble

Composer
David Vaughan
Year of composition
2002
Lyricist
none
Difficulty
Moderate (Grades 4-6)
Duration
5 minutes
Genre
World music and Modern classical music
License details
For anything not permitted by the above licence then you should contact the publisher first to obtain permission.

David Vaughan was commissioned to compose this piece for the Iona College Senior Percussion ensemble as part of the Composers in Schools Project Series 2 in 2002 and copies have been sold in Australia, the Netherlands, Peru, the United States, Taiwan, Belgium and the Northern Mariana Islands.

This piece, scored for percussion ensemble, is a representation of a mythical place, hidden deep within the shrouded confines of a jungle. The place is the abandoned stone city of a forgotten civilisation. Once the home of spiritually-inclined tribal folk, the abandoned ruins have been reclaimed by the relentless will of the verdant jungle. Yet the serene timelessness of the jungle has not fully driven away the lingering memory of the former tribal inhabitants, as the spirits of the Enlightened Ones, known as the Dreamhunters, make their otherworldly presence felt to any that stray within the borders of the lost territory. The sounds of unearthly war drums and unseen forces shatter the relative silence of the ancient jungle, causing intruders to flee before the wrath of the eternal spirits of dreams.

Techniques of note are the use of wine glasses (four are required, and are tuned by adding water to them and performed with wet fingers running around the opening of the glasses), the bowing of the vibraphone at bar 69 (a double bass bow is recommended), and the metric modulation in the beginning section of the Coda.