By: David Vaughan
For: String orchestra
This music is in your basket
View basket
Loading... 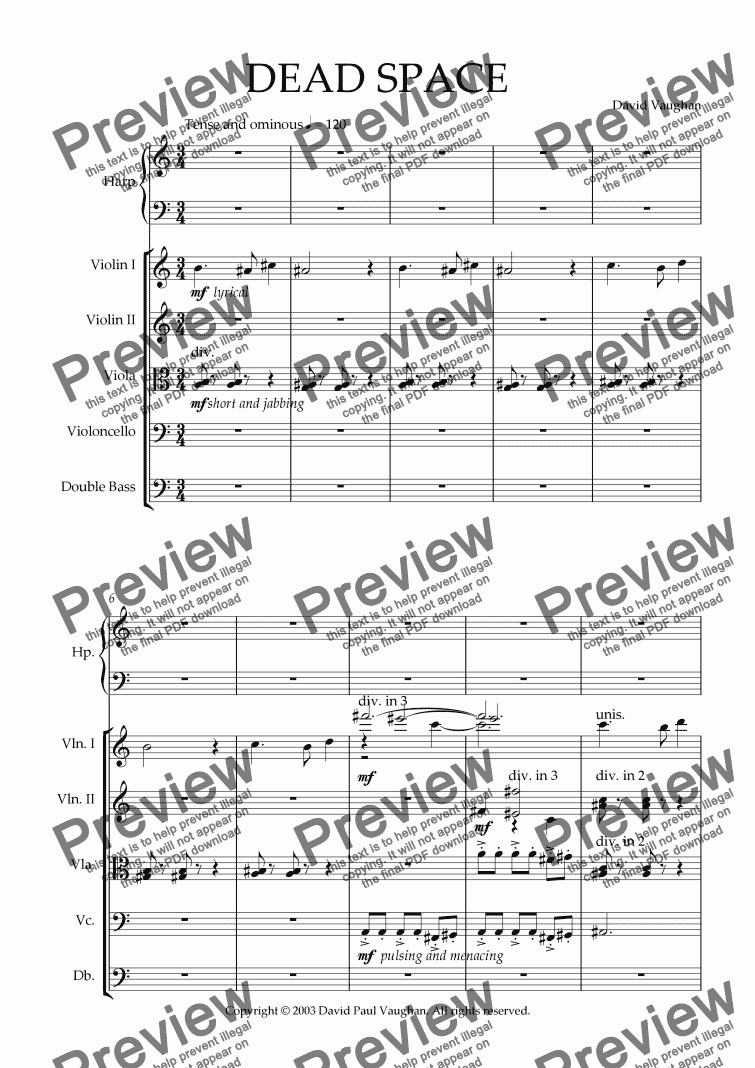 By: David Vaughan
For: String orchestra

Composer
David Vaughan
Year of composition
2003
Lyricist
none
Difficulty
Difficult (Grades 7+)
Duration
2 minutes
Genre
Classical music and Modern classical music
License details
For anything not permitted by the above licence then you should contact the publisher first to obtain permission.

This is the score for a short film of the same name (2003). It begins with a man watching a horror film on television, and follows him into sleep where the viewer is dragged through nightmare sequences. The following is a brief analysis of some thematic details:

The music of the second and third sections of the film are derived and expanded-upon elements of the first section, just as the nightmares themselves seem to be influenced by the 'watching television, talking on phone' scene. Most notable is the use of a motivic figure, quite brief at the end of the first section, that is revisited much more in-depth at the end of the third section –- at 43 seconds in the film (or 34 seconds in the first musical section) there is an upwards figure on the harp. This appears expanded upon at 2:37 in the film (or 37 seconds in the third musical section). It is the 'box' idea, theme, motif –- whatever you want to call it. Such a thematic link with the ’box’ was required, and so it exists as a myserious gesture on the harp.

Other minor thematic ideas are the 'Dead Space opening theme', which is played on violins on the television, but in the first dream sequence are plucked on the cellos. There is also the 'danger approaching' idea, which is the Jaws-like pulsing figure on the cellos and double basses with the violins screeching downwards from above. This is revisited in both second and third sections –- in the second, the screeching violins feature prominently when the character is attacked. The last minor thematic idea worth mentioning is the 'forest music', which is mysterious-sounding, reflecting the mystery of all-of-a-sudden seeing a forest on-screen (it seems quite a contrast to the implied 'murder scene' mere seconds earlier). It becomes the basis of the second dream music, but more relaxed. Low cellos arrive sedately, gently insinuating that not all might be well. The harp part starts clashing dissonantly, intensifying the feeling of unease, when the Jaws-like 'danger approaching' music arrives.

Pact of Vengeance, Marshland, The Storm, III. The Cyclone, The Storm, II. The Ancient Forest, The Storm, I. Before the Storm, Wednesday, Fires in the Rain, Lullaby for Katie, Man of Spiel, Derivations, Monday, Modal Dances, I. Ionian, Modal Dances, II. Dorian, Night of the Roaming Dead, The Theropod Walk, A Troubled Mind, Swingin’ Skies and Children in the Field