By: Jeremiah Clarke
For: String orchestra
This music is in your basket
View basket
Loading... 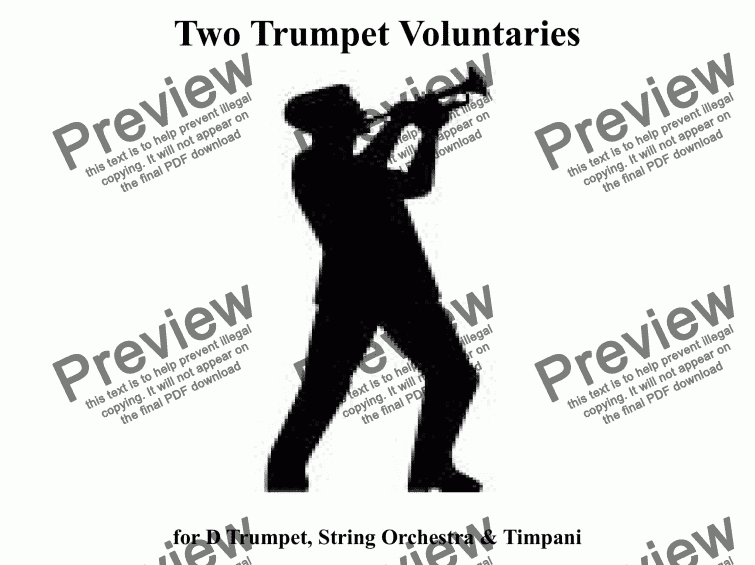 By: Jeremiah Clarke
For: String orchestra

Composer
Jeremiah Clarke
Arranger
Keith Terrett
Year of arrangement
2014
Publisher
Music for all Occasions
Difficulty
Difficult (Grades 7+)
Duration
3 minutes
Genre
Classical music
License details
For anything not permitted by the above licence then you should contact the publisher first to obtain permission.

This version is for players who are confident in the extremes of the Trumpet’s clarino tessitura.

The smallest forces possible with this arrangement would be solo trumpet and string quintet, whereas the largest forces would include as many strings as you can muster plus timpani!

The two pieces arranged so far are ’’Trumpet Voluntary’ from the composer’s ’’Choice lessons for the Harpsichord’’, & ’Trumpet Tune’ from the ’’Island Princess’’.

I have available transpositions for various trumpets, so the trumpeter can choose the instrument of his or her choice! Parts are available on request.

If you would like to explore my published brass quartet music, take at look at my ’’7 julesanger’’ which can be found under ’’nyheter’’ on the following website:www.musikk-huset.no

Alternatively my original concert band music including ’’Keep the Fire Alive’’, can be located at my U.K. publishers website:www.safemusic.co.uk

For many years, the piece was attributed incorrectly to his elder, and more widely known, contemporary, Henry Purcell, who was organist of Westminster Abbey. The mis-attribution emanated from an arrangement for organ published in the 1870s by Dr. William Spark, then town organist of Leeds, England. It was later adopted by Sir Henry Wood in his well known arrangement for trumpet, string orchestra, and organ.