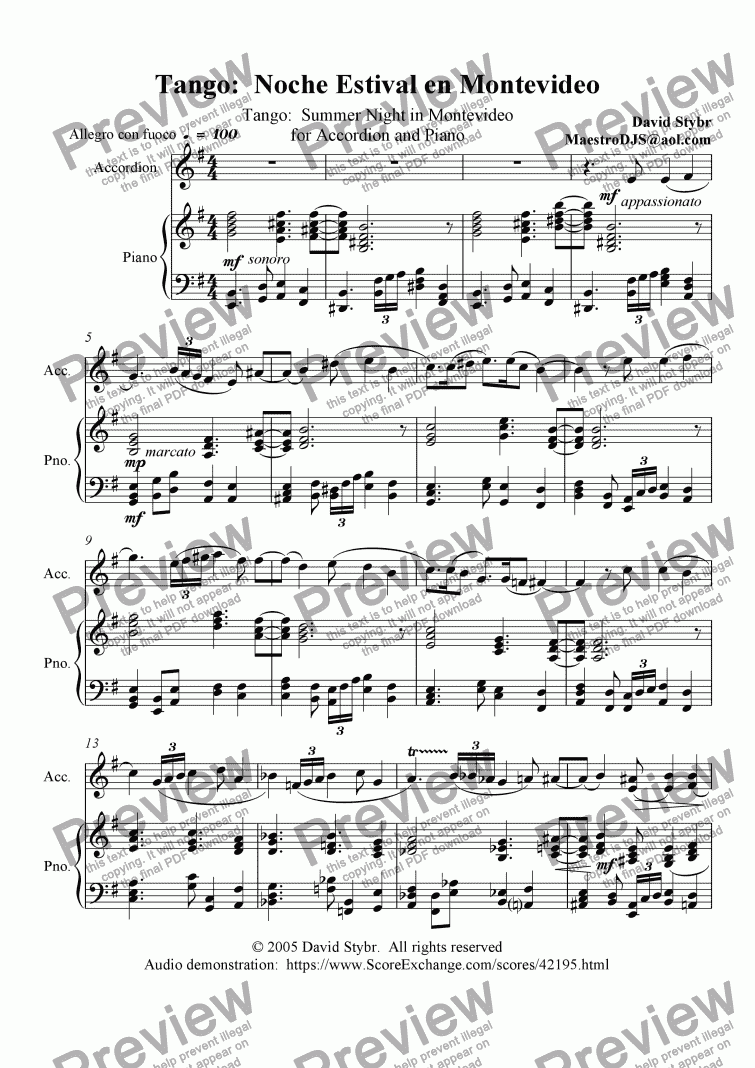 Commentary by Left Brain vs. Right Brain. RB: "In January 1999, my wife Denise & I explored awesome Chile, Uruguay and Argentina. This Tango recalls a moonlit January summer night on el R�o de la Plata, en route from Montevideo, Uruguay to Buenos Aires, Argentina. It was a joy to visit these beautiful, friendly and quasi-European countries in southern South America." LB: "This piece melds tango dance rhythms with modified sonata form: an exposition of a twelve-bar theme (the first two phrases are similar, and the third completes them), a development in free passacaglia form on a rising circle of fifths, and a recapitulation. It has rhythmic and harmonic twists, plus counterpoint. It is a tango in character, but a sonata allegro in form and content." RB: "So which is it? A tango in sonata form, or a sonata in tango form? Or both?" LB: "One of my favorite quotations is by French author Andr� Gide. In the preface to his book Pr�ludes, he wrote that 'even if we know what we wish to say, we cannot know whether we have said only that. And what interests me especially is what I have put into my book without my own knowledge…' Gide was interested in the unconscious element in one's creations." RB: "Oui, Monsieur, like those groovy augmented 2nds in the main theme. The central Interludio quasi una passacaglia lets me fiddle with open strings as the theme rises by 5ths: G– D-D-D and D– A-A-A. I wanted to continue the iteration to A– E-E-E, but it made the theme too doggone high, so I dropped it an octave. Oh well, 3 out of 4 open strings ain't bad." LB: "This tango was completed December 2005 in Charlotte, North Carolina – as winter descends on the Northern Hemisphere, but summer shines on the Southern Hemisphere." RB: "It has nothing to do with the music, but I fondly remember New Year's Day 1999 in Montevideo, especially those torn-up office calendars all over the streets. The locals explained that on New Year's Eve they tear up their old calendars and throw them out the windows like confetti. Then they spray each other with champagne. Of course it's summertime in the Southern Hemisphere, so they can get away with it. Those crazy Uruguayans!"