By: Peter Dewar-Finch
For: Choir
This music is in your basket
View basket
Loading... 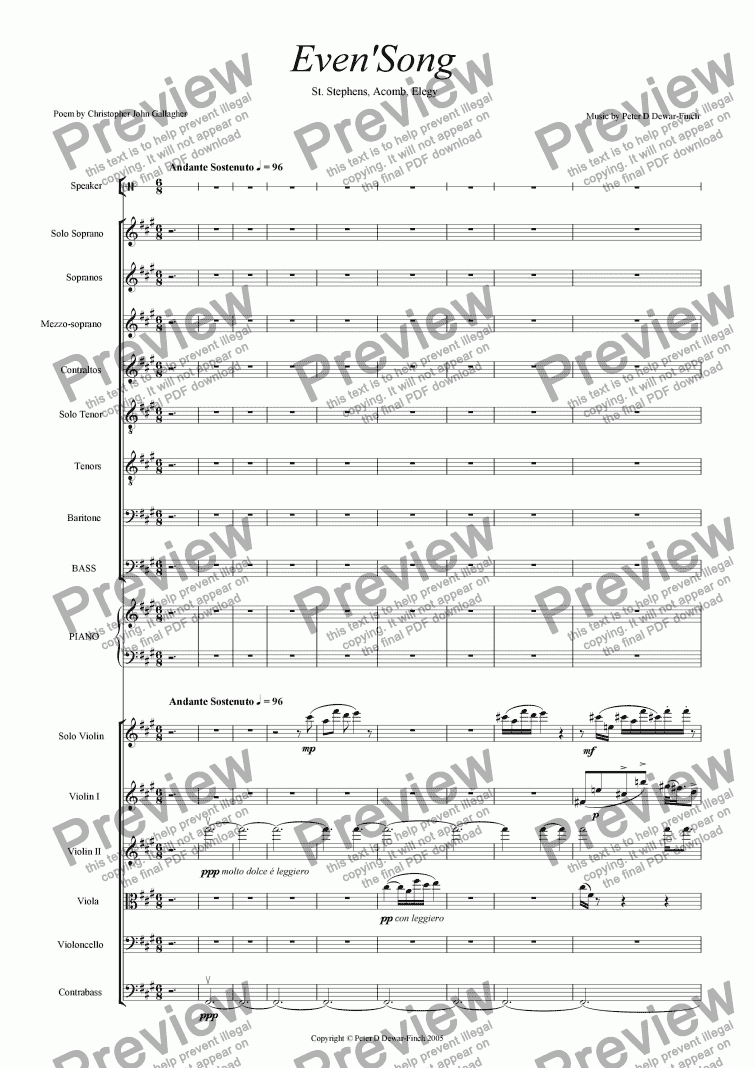 By: Peter Dewar-Finch
For: Choir

Composer
Peter Dewar-Finch
Year of composition
2004
Lyricist
Christopher John Gallagher
Difficulty
Difficult (Grades 7+)
Duration
19 minutes
Genre
Classical music
License details
For anything not permitted by the above licence then you should contact the publisher first to obtain permission.

Writer, journalist and poet, Christopher John Gallagher was inspired to write the poem �Even�song� one hot August evening while taking a stroll through St. Stephen�s Church yard in Acomb, York. Whilst Chris was reading the weathered and time worn inscriptions on the headstones of graves, the resident Blackbird struck up an alarm call, then sank into mellifluous and mesmerising song, which somehow struck a chord within the poet�s mind, and it seemed to speak to him to remind him not to forget those who lay buried there.

Some months later Chris asked me if I could illustrate the poem from the scene as he described it to me. I told him that perhaps I could do a painting of it, but whenever I began I heard music instead running gently through my mind.

The music was tantalising and often barely discernable, but it was there. The urge to express it became so strong that I abandoned the idea of a painting and informed Chris that I would instead create a piece of choral music to express it. This was an opportune time as we were both working on arts projects within the York Arts Forum in preparation for the 1987 York Arts Festival.

Unfortunately, the York Arts Forum was overtaken, it�s interdisciplinary constitution overturned and the founding members, including Chris and myself, sacked by the painter�s faction within the group and it was effectively wound up before we could finish our work for the festival and I put my sketch scores away in a drawer for the time being, never knowing if I would ever finish it. The intervention of illness in the 1990�s, which later turned out to be Multiple Sclerosis, caused me to have more time to myself, so I reviewed my score and set about - at a leisurely pace - to finish it. This 2004 version of my score (which I sub titled St. Stephen�s, Elegy to save confusion with the daily church service called �Even�song�) is the result of that review.

The advent of modern computer technology music notation and playback software allowed me to actually hear, for the first time, my musical ideas hitherto put down only on paper. I utilised this technology as an aid to composition and with the employment of this, and use of my Hammond Two Manual Pedal Organ, I was able to make considerable progress. The latest phase in that progression is the use of Sibelius software, the creators of which, Jonathan and Ben Finn, I�m grateful.

The music attempts to remain true to the original feelings and intent of the poem. The poem was inspired one hot Sunday evening in August 1984 in St. Stephen�s Church Yard, Acomb, near York, just West of the City.

The music, when interpreted should be accorded the same tone of Catholic / Anglican religiosity. Theologically, it was my influence and input of alternative beliefs and philosophy tempered with my Anglican Church of England schooling and education mixed with Chris Gallagher�s Catholic High Church upbringing, softened by his preferred Anglican beliefs; which brings about the Voice of the Blackbird metamorphosing into the Ghost of Friendship, who asks the dead and the living to account for their love, or lack of it, for their fellow human beings.

The senses reel as they are lulled by the repetitive song of the Blackbird amidst the drowsy warmth of the late summer�s evening, overwhelmed by the tumbling chimes calling all to prayer and the Walk Among the Headstones; after a weary rest, wistfully musing on the previous lives of the long dead.

The church yard, though peaceful is filled with the clamour of those past and the atmosphere of the evening. It pinpoints it�s existence in time as a point of rest and recuperation, a place between times and worlds, where one can heal, think and then go forward.

The atmospheric string chord on Violins and Double bass sets the mood of the summer�s evening. The mellifluous alla Turdus Merula solo Violin and pianoforte evocative of the Blackbird. The Lyric Soprano confirms and takes up the narrative from the spoken voice and the first stanza proceeds to it�s close with the accompaniment of the Chorus.

In dreamy retrospective contemplation the Chorus evokes the dying days of summer with the Blackbird song (so ubiquitous to English summers) as the catalyst and vehicle for this expression, culminating in the comparison of the Blackbird�s pealing song with the feint peal of choral bells imitative of tumbling chimes.

Memory can recall pleasures, but can also be painful, sometimes all at once; the final Chorale and the following crashing chords on the Piano� Double bass and Violoncelli imply this.

The string intermezzo denotes rest, but continues the chain of thoughts, mindful of the intruding Blackbird into the consciousness moving the thoughts along to friends enjoyed and friends wronged. Is the Blackbird, from it�s ancient wisdom, speaking to us?

The dark green and blue shadows on the lawns amongst the head stones are now at their longest, and dim, the dreamy state continues as our walk is resumed, accompanied by the echoing song of the Blackbird. Recollection creeps almost imperceptibly into clearer focus and the last vestiges of sunset, like memory, seems to burst through the evening dusk, as it does between the headstones like an �In Memoria� spray, ecumenical in it�s humanitarian favours, thus ending the stanza.

Dusk; and the Ghost of Friendship begins to gather itself, weaving form from mind and expression, and from the materials around it; - from the sunset, from the dusk, from the mists, from the earth and the grave stones, from the long dead legacy of those beneath them, and their history, from human brain and endeavour; - And, from the BLACKBIRD.

All that is or was flesh now finds expression and begins to exist in all times and all worlds at once, as the omnipotent nature of the Ghost of Friendship / Blackbird calls us to account. Until finally, awareness of the Blackbird song in the early dark is all there is left, peaceful and tranquil, with only the accompaniment of the ambient rumble of the Earth, (represented by a Double Bass) apparently rotating on it�s axis through space and time.