By: Philip R Buttall
For: Solo instrument (Organ [manuals])
This music is in your basket
View basket
Loading... 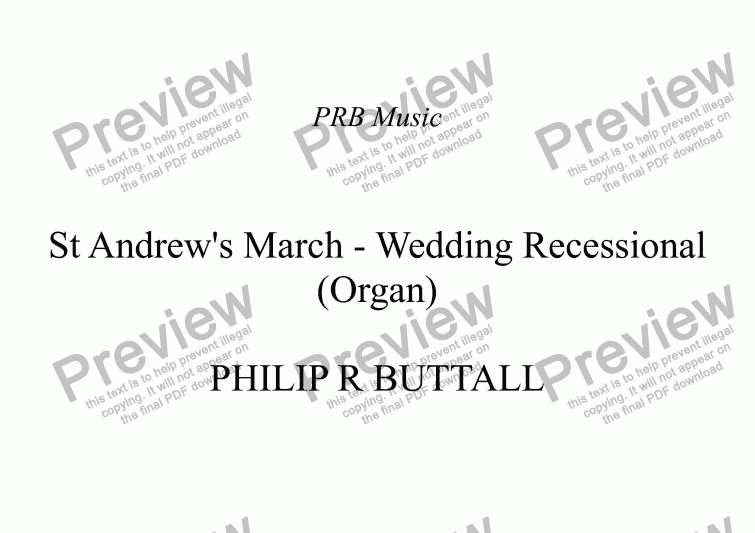 Composer
Philip R Buttall
Year of composition
1967
Publisher
PRB Music
Difficulty
Difficult (Grades 7+)
Duration
5 minutes
Genre
Other
License details
For anything not permitted by the above licence then you should contact the publisher first to obtain permission.

This march was originally written in 1967, and first performed on the organ at St Andrew's Church, Plymouth, by the then organist, Philip Liddicoat. It was composed for friends of mine, who wanted something different at the end of their wedding service, and also something which would show off the fine organ in the Mother Church of Plymouth, a picture of which is attached. It is written in ternary form, with the quieter middle section returning triumphantly at the close. It has since had a number of performances across the country.

Whilst it was originally intended as a recessional Wedding March, I feel it could quite easily stand on its own, so I have renamed it St Andrew's March, which celebrates the church's recent change of name and status to The Minster Church of St Andrew, Plymouth, given that the city does not have a Church of England cathedral in its own right.

The attached MP3 file was originally realised using my Yamaha EL 90 Electronic Organ, but when I recently tidied up the score, I decided to use the outstanding sounds of Note Performer, which are often better than Sibelius 7. The disadvantage is that it keeps to the same registration throughout, rather than changing as marked, for the gentler Trio section, or the final loud ending.