By: Jordi Vives i Batlle
For: Trio of Clarinets in Bb
This music is in your basket
View basket
Loading... 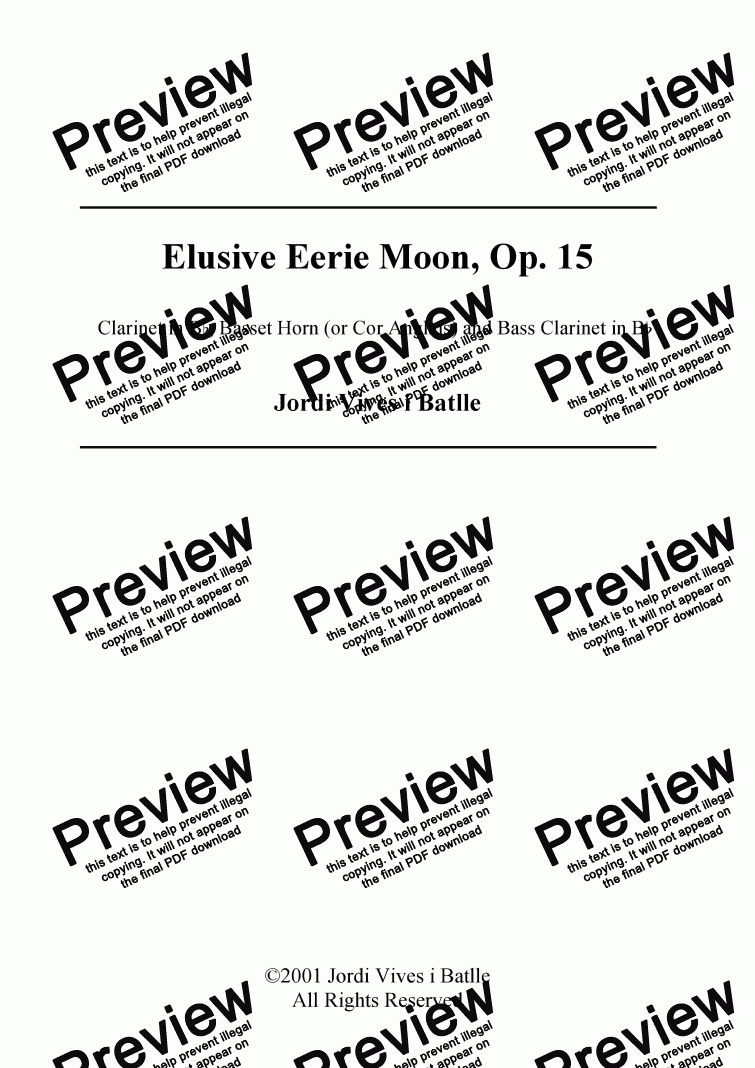 By: Jordi Vives i Batlle
For: Trio of Clarinets in Bb

Composer
Jordi Vives i Batlle
Year of composition
2001
Lyricist
none
Difficulty
Moderate (Grades 4-6)
Duration
2 minutes
Genre
Modern classical music
License details
For anything not permitted by the above licence then you should contact the publisher first to obtain permission.

“Elusive eerie Moon” is inspired by a vision of the full moon in a summer evening, with the wind menacingly hissing amongst the trees. I did not intend to describe the moon, but the selenitic state of mind that was induced in me by that vision. After experimenting with different instruments I concluded that the combination of two clarinets and either the basset horn or cor anglais provides the colour desired, contributing to the general spookiness of the piece.

There is no particular style tag or formal structure to this composition other than a somewhat peculiar use of variation form. What I sought was brevity and simplicity. The music is neither tonal, nor fully atonal. The piece is not serial even though the opening theme (the ?moon song?) begins with a 12-tone series. The harmonies were chosen to be free from the rules of traditional tonality, but with musicality as the ultimate goal.

In sum, this piece is an experiment to express a feeling, and if it sounds nocturnal, slightly spooky and strangely detached, then it fulfils the purpose for which it came sneakily into the world.

Note: This score was revised on 7 December 2002 in response to a reviewer objecting to the Eb clarinet and the glissandos. These and other notational improvements have been made. The music is set in an open key (atonal), and the pitches on each stave are shifted so that they will sound a major second, perfect fifth and major ninth below the written notes when played by the soprano Bb, F and bass Bb transposing instruments, respectively.