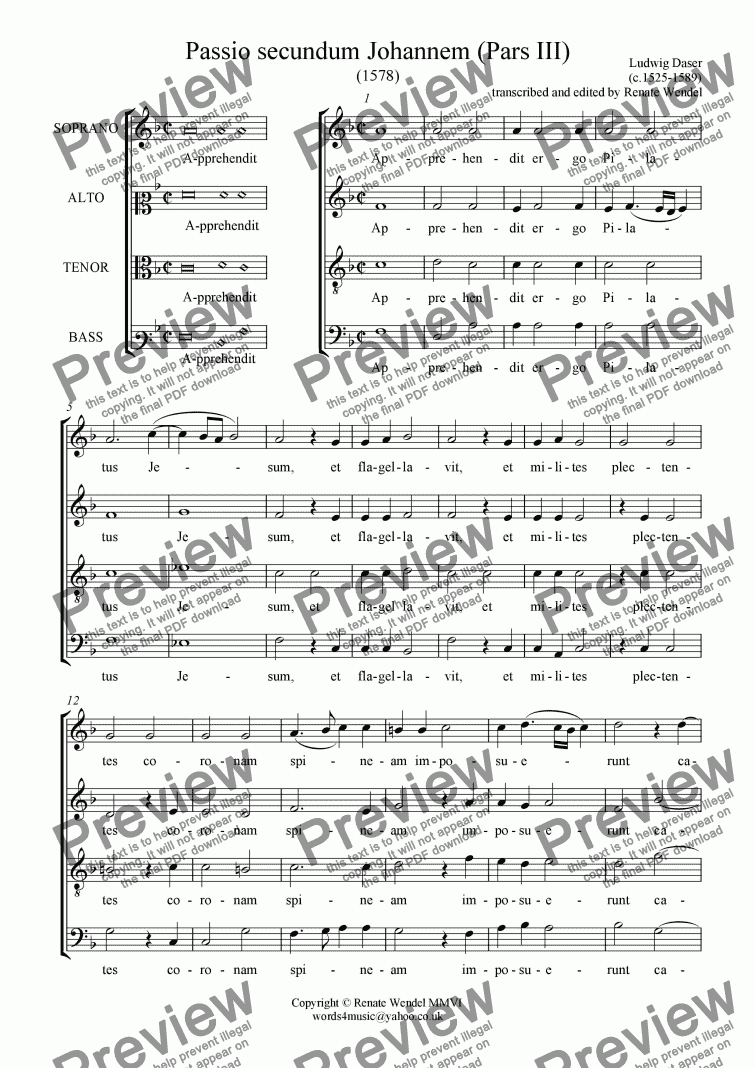 Ludwig Daser was born c 1525 in Munich and became a member of the Bavarian court chapel at an early age. In 1550 he is listed as a tenor and in 1552 as court Kapellmeister. In 1563 he left this position possibly due to religious friction with his employer Duke Albrecht. His successor was Orlando di Lasso. In 1572 Daser was appointed court Kapellmeister in Stuttgart, where he remained until his death on 27 March 1589.

Several masses, including a parody mass on Josquin's "Ave Maria" as well as motets and German sacred songs survived in manuscript copies and in 1578 Daser published his Latin 4-part a capella setting in 5 "movements" of the St John's Passion. This is of particular historical interest because of its similiarities with Lasso's 1593 German setting. Both are examples of a through-composed "summa passionis" without chant passages, which uses excerpts from the biblical text highlighting the drama of the story. The old chant however runs through the pieces as a unifying cantus firmus.

Stylistically Daser is close to Lasso and Lechner and intent on showing off the in his time modern devices of dramatic and expressive word painting versus established imitative techniques and more old fashioned passages and sometimes rather stark cadences. He also juxtaposes homophonic declamation and elaborate counterpoint to dramatic effect, highlights certain passages with pointed harmonic turns and uses a full range from simple 2-part textures to elaborate melismatic 4-part counterpoint of surprising richness.

In order to submit this score to ScoreExchange.com Renate Wendel has declared that they own the copyright to this work in its entirety or that they have been granted permission from the copyright holder to use their work. If you believe that this score should be not available here because it infringes your or someone elses copyright, please report this score using the copyright abuse form.