By: Anton Dvořák
For: Solo Xylophone + piano
This music is in your basket
View basket
Loading... 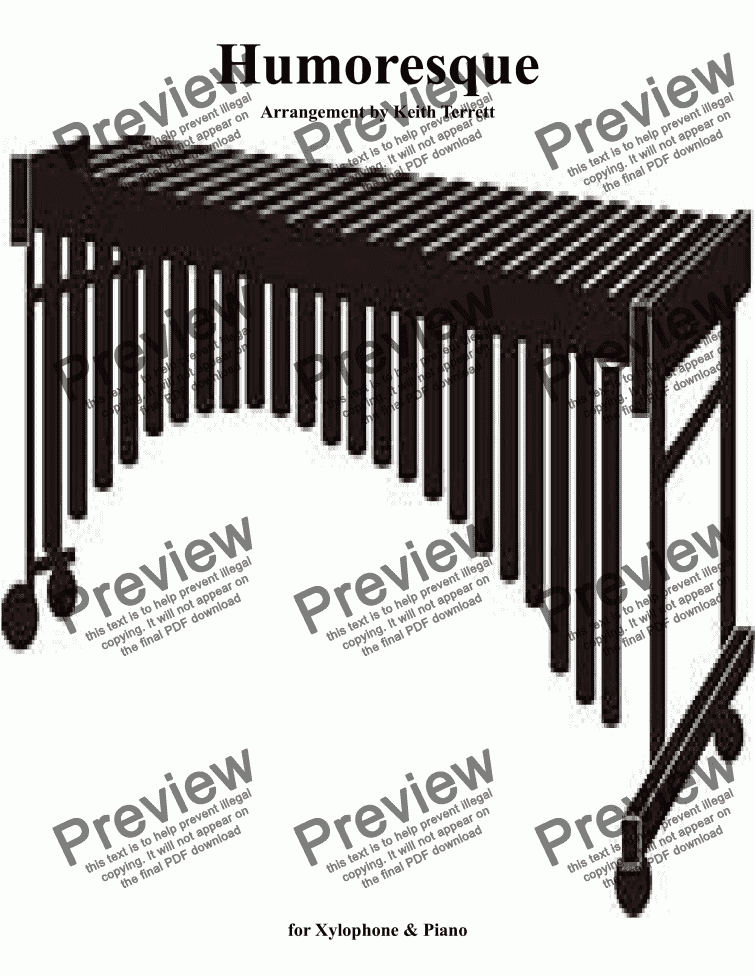 Composer
Anton Dvořák
Year of composition
1898
Publisher
Music for all Occasions
Difficulty
Moderate (Grades 4-6)
Duration
3 minutes
Genre
Classical music
License details
For anything not permitted by the above licence then you should contact the publisher first to obtain permission.

The Humoresque Op. 101. No. 7 , arranged here for Xylophone & Piano (Czech: Humoresky), Op. 101 (B. 187), is a piano cycle by the Czech composer Antonín Dvořák, written during the summer of 1894. One writer says "the seventh Humoresque is probably the most famous small piano work ever written after Beethoven's Für Elise."

During his stay in United States, when Dvořák was director of the Conservatory in New York from 1892 to 1895, the composer collected many interesting musical themes in his sketchbooks. He used some of these ideas in other compositions, notably the "New World" Symphony, the "American" String Quartet, the Quintet in E♭ Major, and the Sonatina for Violin, but some remained unused.

In 1894 Dvořák spent the summer with his family in Bohemia, at Vysoká u Příbrami. During this "vacation", Dvořák began to use the collected material and to compose a new cycle of short piano pieces. On 19 July 1894 Dvořák sketched the first Humoresque in B major, today number 6 in the cycle. However, the composer soon started to create scores for the pieces that were intended to be published. The score was completed on 27 August 1894.

The cycle was entitled Humoresques shortly before Dvořák sent the score to his German publisher F. Simrock. The composition was published by Simrock in Autumn, 1894.

The publisher took advantage of the great popularity of the seventh Humoresque to produce arrangements for many instruments and ensembles. The piece was later also published as a song with various lyrics. It has also been arranged for choir. The melody was also used as the theme of Slappy Squirrel in the popular animated television show Animaniacs. In 2004 the vocal group Beethoven's Wig used Humoresque as the basis for a song entitled Dvořák the Czechoslovak.

The cycle consists of eight pieces:

The main theme of the first Humoresque was sketched in New York City on New Year's Eve 1892, with the inscription "Marche funèbre" (sic). The minor theme was accompanied with the inscription "people singing in the street". The opening theme of the fourth piece was also sketched in New York, among ideas intended for the unrealized opera Hiawatha. The "American" style is also apparent in other themes of the Humoresques.

Reviews of Humoresque for Xylophone & Piano