By: Puccini, G.
For: Choir
This music is in your basket
View basket
Loading... 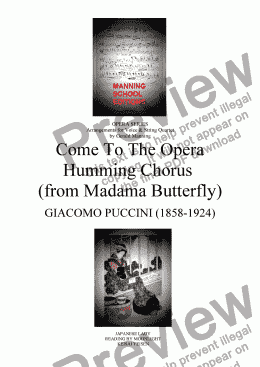 Composer
Puccini, G.
Year of composition
1904
Arranger
Gerald Manning
Publisher
MANNING SCHOOL
Difficulty
Difficult (Grades 7+)
Duration
3 minutes
Genre
Classical music
License details
For anything not permitted by the above licence then you should contact the publisher first to obtain permission.

The Puccini name enjoyed a considerable reputation in Italy for more than a century, for Giacomo Puccini was descended from a fine pedigree of musicians beginning with his great-great-grandfather, Giocomo (1712-81), and all his ancestors in the direct line were musicians of prominence, mainly in the domain of ecclesiastical music: Antonio (1747-1832), Domenico (1771-1815), and Michele his father (1813-64) who was organist at Lucca where �GIACOMO ANTONIO DOMENICO MICHELE SECONDO MARIA PUCCINI (his full name was a long one) was born in 1858. He entered the Milan Conservatory in 1880 where he was very fortunate to study with an excellent teacher of composition, Antonio Bazzini and later he came under the influence of Amilcare Ponchielli, composer of La Gioconda.

The first performance of Madama Butterfly took place at La Scala, Milan, on the 17th of February 1904. Set in Nagasaki the opera is allegedly based on a true incident. An American naval officer, Pinkerton, has persuaded a Japanese geisha, Butterfly, to marry him. His duties however take him away from Butterfly and when he eventually returns after an absence of three years it is in the company of his American wife. Butterfly refuses to believe the infidelity and betrayal but as the realisation of the truth becomes apparent the grief-stricken and broken-hearted woman kills herself.

The Humming Chorus is sung as the moon light streams into her bedroom while she and her child sleep.