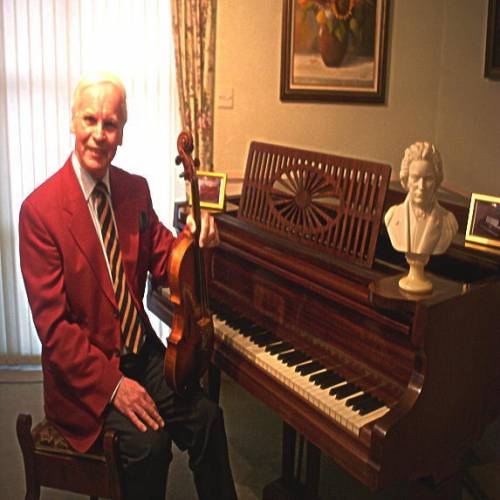 Gerald Manning has been a professional viola player and teacher for over forty years, and retired from the number 4 position in the viola section of the BBC Symphony Orchestra after 29 years as a member. Previous to this he also held the sub-principal viola position in the Royal Liverpool Philharmonic Orchestra from 1964 to 1968, and has recently been listed in a new web site of Composers with Merseyside Connections. He has also worked with the Orchestra of the Royal Opera House - Covent Garden, the Philharmonia and the Royal Philharmonic Orchestras of London. Since leaving the BBC Symphony Orchestra he has built a very successful teaching practice in West Sussex where he now resides, and continues to compose and coach students in Chamber Music. With the viola section of the BBC Symphony Orchestra he has given two Wigmore Hall recitals in celebration and in the presence of the great English viola virtuoso Lionel Tertis. He had previously met Lionel Tertis in February 1962 when Tertis was living at Marryat Road in London; Bernard Shore sent his young protegee to his former teacher when he heard that Tertis had a viola available which was made to his specifications by Lovett Gill whose brother was none other than the British sculptor, engraver, and typographer Eric Gill. Tertis asked Manning to improvise a short melody and play it across the complete range of the instrument using different positions and modulations where needed and at it's conclusion he seemed pleased for the instrument was offered to the young student. He has of course worked with some of the finest conductors, composers and soloists during his long and eventful career. He has broadcast regularly on BBC Radio 3 and Television, and his discography with the BBC Symphony, Royal Liverpool Philharmonic and Philharmonia Orchestras' is considerable. As a Conductor he has held the post of Assistant-Conductor to James Kershaw and Worthing Citizens' Orchestra, and principal conductor to Harrow Symphony Orchestra and Herga Philharmonic Orchestra. He also Composes and his most recent works are three miniatures for Violin and Piano, a Violin Sonata, String Quartet, a Romance for Viola and Orchestra, 'HERCULANEUM' which is a large scale orchestral work with chamber choir and he has just completed his first viola sonata which is dedicated to the memory of his former teacher Bernard Shore. Educated at Kneller Hall and the Royal College of Music he studied the viola with Bernard Shore, clarinet with Ralph Clarke, and at Kneller Hall with the legendary George Garside-principal clarinet of the London Symphony Orchestra, and it was at this time that he also had some private tuition with Frederick Riddle who was principal Viola in Sir Thomas Beecham's Royal Philharmonic Orchestra. At the Royal College of Music he studied composition with the English Composer Adrian Cruft, who was the son of the distinguished double-bass player Eugene Cruft, who Sir Thomas Beecham invited to join his newly formed orchestra of 1909.From 1929-49,Eugene Cruft was principal double-bass in the BBC Symphony Orchestra. Gerald Manning studied chamber music with Helen Just, and conducting with Harvey Philips. Professor Bernard Shore imbued and inspired him to emulate his teaching methods. After graduation, and whilst a member of the Royal Liverpool Philharmonic Orchestra he secured what was to be the first of his peripatetic appointments with Cheshire Education Authority, and taught the violin and viola at Wirral Grammar School. Returning to London and the BBC Symphony Orchestra, Harrow Education Authority appointed him as a peripatetic teacher in two of their Grammar Schools. During his teaching career he received the following commendations: "Throughout the Borough of Hillingdon & Harrow, Gerald Manning was well-known & acclaimed as one of the most gifted Violin Teachers." (Retired Deputy Head-Teacher)"I was recommended to him by a Music Colleague, who gave me a glowing report of his qualities as a musician & an excellent violin teacher for children of all ages" (Private Piano Teacher - Uxbridge)" We found him to be an inspirational teacher and David did well under his tutelage. We were very satisfied with the quality of Mr Manning's Teaching." (Professor C.L.H. - Ruislip) He has also had the opportunity to study the Suzuki method on his frequent visits to Japan. He is widely travelled and speaks German and French. His hobbies are reading, travel, painting, calligraphy, and 'classic' cars, and he possesses a fine collection of instruments and bows, which include an Obermeier baby grand piano, and a beautiful unnamed English Viola of 1792. As an author Gerald Manning has written three books, (1) Watch The Conductor (2009): a book of reminiscence, which attempts to give a brief summation of some of the great conductors the author has been privileged to play under: (2) So You Want To Play The Violin (2009): for parents with gifted children and mature adults who wish to pursue serious study on the instrument: (3) In Pursuit of Perfection; The Great Luthiers (2010): a history of the great violin makers craft dedicated in emulating the old masters in the pursuit of perfection. All three volumes are available at myebook.com. A devout and practising Christian Gerald Manning was confirmed at Westminster Abbey on Saturday, the 23rd of March 1957 by the Lord Bishop of London.