All Through the Night for Violin and Piano 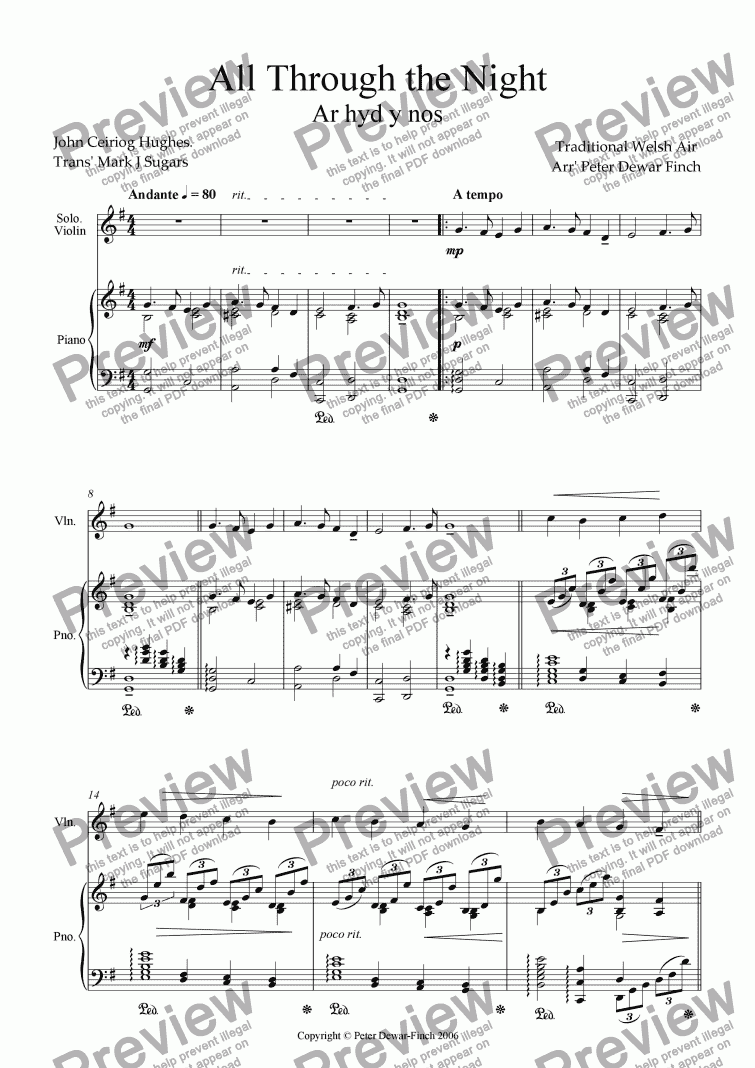 All Through the Night for Violin and Piano

In its original Welsh (Cymraeg) version All Through The Night is better known as Ar Hyd Y Nos. This sounds most beautiful when sung in its original Welsh, but I wont expect you to either read it or sing it in welsh even though the original language is included in the first link below. There are many versions of this song, so Ill mention the tune first:

This Welsh folksong is sung to a tune which was first published in Edward Jones' Musical and Poetical Relics of the Welsh Bards (1784), though the melody is probably a lot older.

The lyrics were written by John Ceiriog Hughes. It has since been translated into several languages, including English and it is suggested that the first English translation of the lyrics was written by the Romantic poet Amelia Opie (1769-1853); If that were the case then it obviously predates Edward Jones book. Evan James, a weaver from Mid Glamorgan, wrote a version of the Lyrics in January 1856. Sir Harold Boulton (1884) also wrote a popular version.

Since the 19th century numerous alternative verses have been written for this universally loved melody in many different languages and is popular in Germany as In stiller Nacht. The song is highly representative of the Welsh choir tradition.

In my version the Lyrics are from J. Mark Sugars translation of the original Welsh text, which are then followed by additional (or alternative) verses of the popular version.

My version of the tune is, in common with a number of my traditional folk tune arrangements, again, for violin and with, this time, the accompaniment of either a piano or harp. This latter carries the melody by inference as well as providing an atmospheric accompaniment. As with all my arrangements, the human voice is uppermost in my mind (but MIDI voices do not reproduce well) and this tune can be sung using the lyrics I have provided at the end of the score. The violin part can, of course, be replaced with almost any instrument.

Reviews of All Through the Night for Violin and Piano