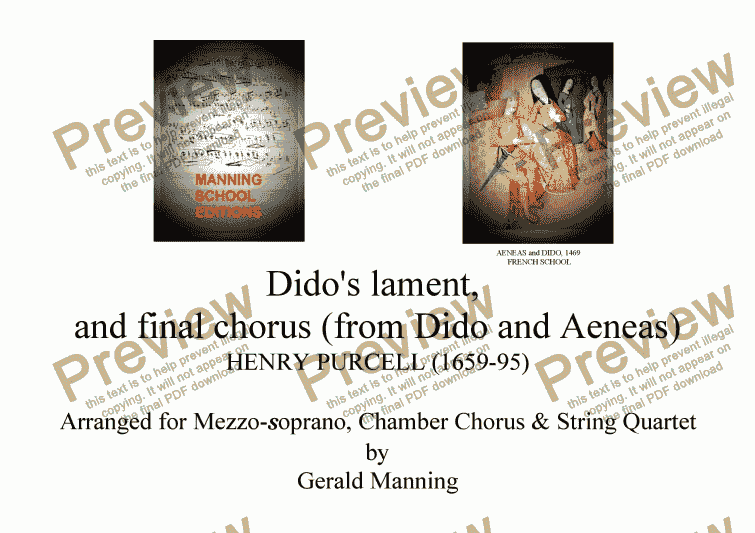 The first known performance of Henry Purcell�s only opera, which is a short work composed for a girls� school was given in 1689 in London at �Josias Priest�s Boarding-School at Chelsey by young gentlewomen�; however it could have been performed earlier at the English court. It has a perfection of it�s own, but was much influenced by Italian laments, in which composers� such as Monteverdi some eighty years before set the model for such compositions by the use of a ground bass, and of a descending fourth which are traditional features and express lost love or death.

The libretto by Nahum Tate recounts the tragic story of Dido and Aeneas. The Greeks, who have been besieging Troy for ten years, finally enter the city by subterfuge in the guise of a wooden horse, in the belly of which men-at-arms are concealed, and sack it. Under the aegis of Venus the Trojan prince Aeneas escapes with the intention of founding a new city in Italy: Rome. During the voyage a violent storm drives his ship to Carthage the city of the widowed queen Dido who is immediately captivated by him and implores him to stay, but he is cajoled and tricked by a sorceress who reminds him about fulfilling his destiny. Dido is inconsolable and heartbroken. In a domineering way she taunts Aeneas about his indecisiveness, and after dismissing him she sings her lament (which is really addressed to her companion Belinda who she does not want to trouble, and not Aeneas) and dies.