Sign in / Register
HomeInstrumentationsOrchestraConcerto for Viola and Chamber Orchestra, Op.19

By: Charles Liu
For: Orchestra
This music is in your basket
View basket
Loading... 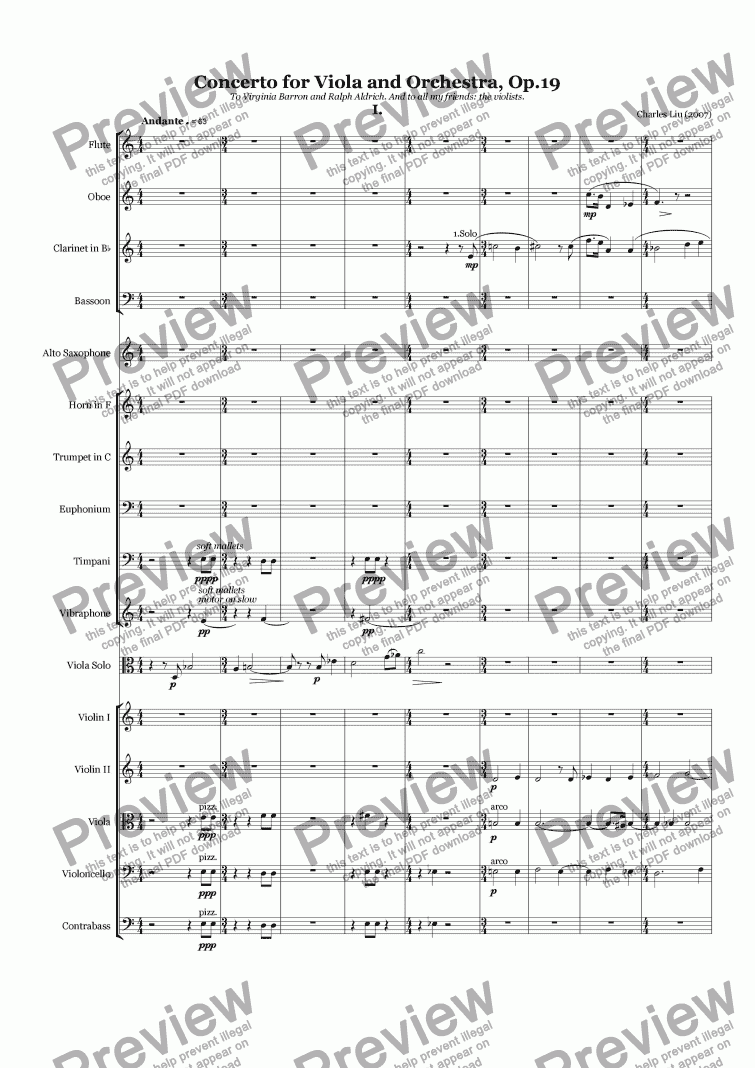 By: Charles Liu
For: Orchestra

Composer
Charles Liu
Year of composition
2007
Lyricist
none
Difficulty
Difficult (Grades 7+)
Duration
24 minutes
Genre
Modern classical music
License details
For anything not permitted by the above licence then you should contact the publisher first to obtain permission.

This has multiple meanings, surface and hidden. Written in one of the toughest time yet in my life, I have tried to portray the stereotypical violist, continually striving for the top but always being held back by forces beyond his control. This sense of false hope is evident throughout the work.

The first movement is of a quasi-soliloquy. The orchestra forms an atmospheric backdrop to the soloist’s monologue. There are few exchanges in dialog between the solo and ensemble. Unlike typical first movements, there are no real major developments of the principal thematic fragments. The movement ends with a glimpse of hope and bitter sweet happiness only to be quickly overcome by a surreal cluster of sound and a haunting vibraphone solo.

The second movement, titled ’Nocturne’, contains more interplay between solo and ensemble. An inner tension is built throughout the movement, as with the preceding, building up to a tutti climax before subsiding into a soothing, yet grotesque lullaby. The movement ends similarly to the first: with the strings, and a vibraphone solo. The movement proceeds attacca into the Finale.

The third movement ’Finale’ is a frenetic scherzo with a quasi-tarantella element. Material and elements of the previous movements recur here, constantly interfering with progress. The soloist has its last words before becoming overwhelmed with the struggle to prove himself and resign in despair by joining with the ensemble at the final chord, ending the saga abruptly, eliminating any hope of utterance for the violist.

"In life, we are promised high aspirations…but in truth, we are given false hope."

Reviews of Concerto for Viola and Chamber Orchestra, Op.19

Sorry, there's no reviews of this score yet. Please .
In order to submit this score to ScoreExchange.com Charles Liu has declared that they own the copyright to this work in its entirety or that they have been granted permission from the copyright holder to use their work. If you believe that this score should be not available here because it infringes your or someone elses copyright, please report this score using the copyright abuse form.