Sign in / Register
HomeInstrumentationsString quartetReliquary of Sacred Music - Bach, J.S.- Christians, On This Day Of Gladness from the Schemelli Gesang-buch - arr. for High Voice & String Quartet by Gerald Manning

Reliquary of Sacred Music - Bach, J.S.- Christians, On This Day Of Gladness from the Schemelli Gesang-buch - arr. for High Voice & String Quartet by Gerald Manning

By: J.S. Bach
For: String quartet
This music is in your basket
View basket
Loading... 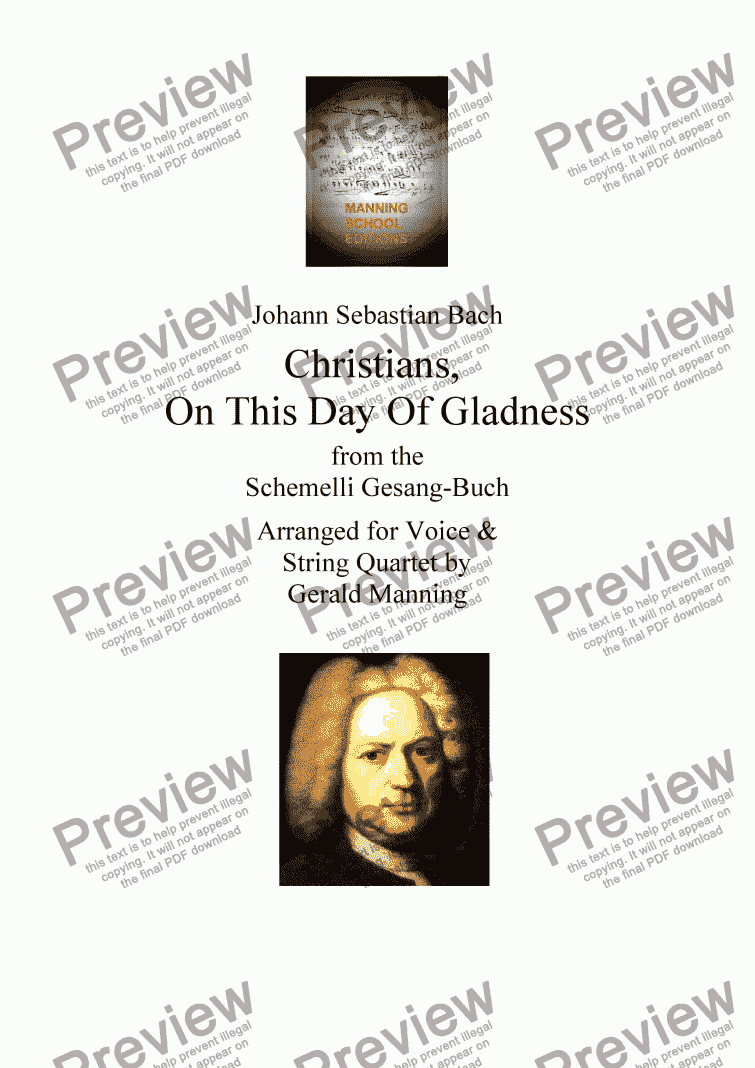 Reliquary of Sacred Music - Bach, J.S.- Christians, On This Day Of Gladness from the Schemelli Gesang-buch - arr. for High Voice & String Quartet by Gerald Manning

By: J.S. Bach
For: String quartet

The musician, Georg Christian Schemelli, was a pupil of the Thomasschule at Leipzig from 1695. Early in 1727 he took up the post of court Kantor at Zeitz. Bach's second wife, Anna Magdalena, was from Zeitz and Bach may therefore have first come into contact with Schemelli while on a family visit to the town. Alternatively, contact may have been made through Schemelli's son Christian Friedrich, who was at the Thomasschule from 1731 to 1734, during which time he studied with J.S. Bach.

Georg Christian's only known publication, the Musicalisches Gesangbuch, popularly referred to as the Schemelli Songbook, was printed and published in Leipzig in 1736 by B.C. Breitkopf as: Musicalische Gesang-Buch, Darinnen 954 geistreische, sowohl alte als neue Lieder und Arien, mit wohlgesetzten Melodien, in Discant und Bass, befindlich sind� Of a decidedly Pietistic bent, it contains the texts of 954 hymns and includes engraved plates giving melody, figured bass, and first verse or text incipit for 69 of these. Bach seems to have acted as musical consultant for the project. In the preface the compiler states that the tunes in his book were partly newly composed, partly improved, by J.S. Bach. This is borne out by the presence of Bach's hand in the reproduction engravings from the collection, either throughout a given setting, in the bass only, or in isolated passages in the bass.

Various authorities on the life of Bach have spent much labour in investigating which were the tunes newly composed by him, and which were merely revised and corrected by him. While Spitta attributes 29 out of the 69 tunes to Bach, F. W�llner, the editor of the volume of the Bach Gesellschaft (xxxix.) in which the hymns appear, considers that only 24 are Bach's; while Q.-L. assigns only 22 to Bach. According to recent research, only three melodies from the collection have been attributed to Bach: Dir, dir, ]ehova (autograph in Anna Magdalena's Music Book of 1725); Komm, s�sser Tod (attributed to Bach on stylistic grounds); and the beautiful Vergiss mein nicht. The last, curiously enough, is the only one of the sacred songs of which the collection mainly consists, to which J.S. Bach name is appended to (above which is written 'di J. S. Bach, D.M. Lips'.). All are arias rather than chorales.

Anthems For All Occasions - God Be In My Head, A setting of the Lord’s Prayer (Pater Noster) for Parish Choir & Organ by Gerald Manning and Baroque Suite - 6.Johann Sebastian Bach Gigue: Ouverture in D BWV 1068 - arr. for string quartet

Reviews of Reliquary of Sacred Music - Bach, J.S.- Christians, On This Day Of Gladness from the Schemelli Gesang-buch - arr. for High Voice & String Quartet by Gerald Manning