Sign in / Register
HomeInstrumentationsString quartetWidor - Charles-Marie - Toccata from Symphony No. 5 for the Organ arranged for String Quartet by Gerald Manning

Widor - Charles-Marie - Toccata from Symphony No. 5 for the Organ arranged for String Quartet by Gerald Manning

By: Widor - C-M.
For: String quartet
This music is in your basket
View basket
Loading... 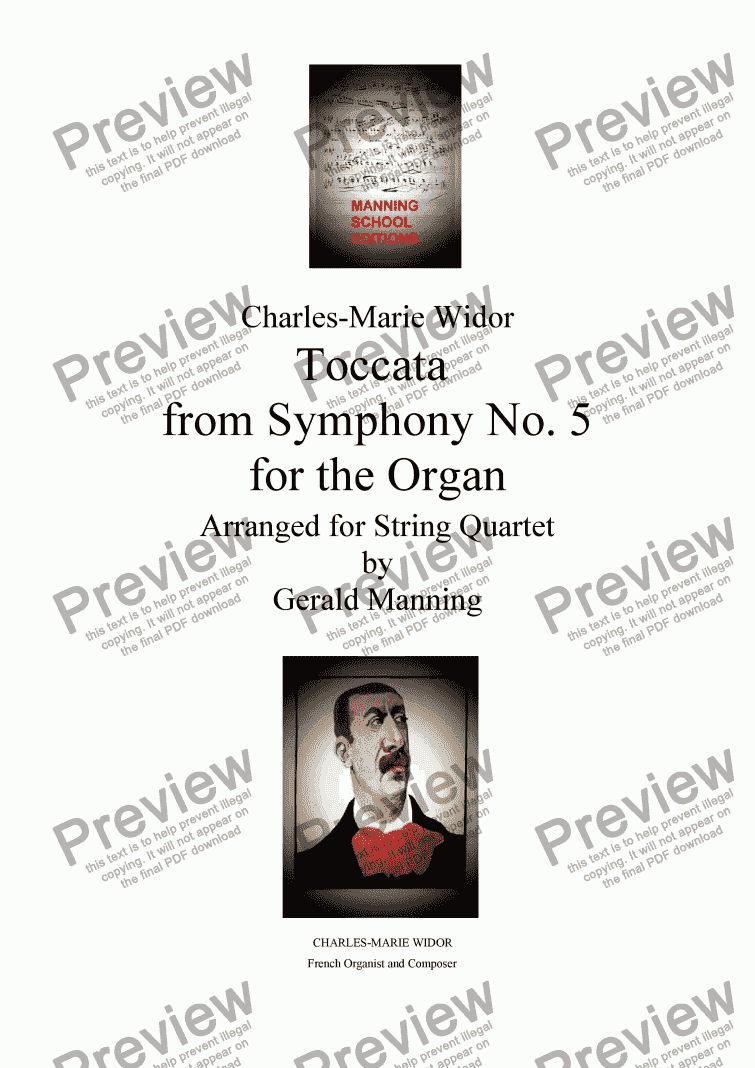 Widor - Charles-Marie - Toccata from Symphony No. 5 for the Organ arranged for String Quartet by Gerald Manning

Composer
Widor - C-M.
Year of composition
1890
Arranger
Gerald Manning
Publisher
MANNING SCHOOL
Difficulty
Difficult (Grades 7+)
Duration
6 minutes
Genre
Classical music
License details
For anything not permitted by the above licence then you should contact the publisher first to obtain permission.

Widor�s father was an organ builder and church organist in Lyons, and gave Charles-Marie his first lessons in music. He continued his organ lessons with Lemmens and also studied composition with Fetis in Brussels. In 1870 he was appointed organist of St Sulpice in Paris retaining his position there until 1934, and in 1890 he succeeded Cesar Frank as professor of organ at the Paris Conservatoire. At the core of his teaching and performing were the works of J. S. Bach, and Louis Vvierne, Charles Tournemire, and later Albert Schweitzer numbered amongst his most distinguished pupils. On his appointment to a composition professorship in 1896 his tutelage included a diverse range of students, among them Marcel Dupre, Nadia Boulanger, Milhaud, and Varese; at this time he also revealed himself as a man of letters when he wrote an excellent treatise on the art of orchestration.

Although he composed copious amounts of music in all forms and genre, including three operas and three orchestral symphonies, he is best known, however, for the ten symphonies for solo organ which were composed between 1872-1900 for the new �romantic� instrument built by Caville-Coll. In these works Widor integrates the austerely liturgical idiom of Bach, to the more secular models of Beethoven, Mendelssohn, Schumann, and Liszt, in a visionary and boldly emphatic orchestral scale. The logically satisfying finale of No.5 is the now famous showpiece �Toccata�.

Hymns for the Solemnization of Matrimony 1. O Father all creating

Reviews of Widor - Charles-Marie - Toccata from Symphony No. 5 for the Organ arranged for String Quartet by Gerald Manning