By: Benjamin Sajo
For: Piano trio
This music is in your basket
View basket
Loading... 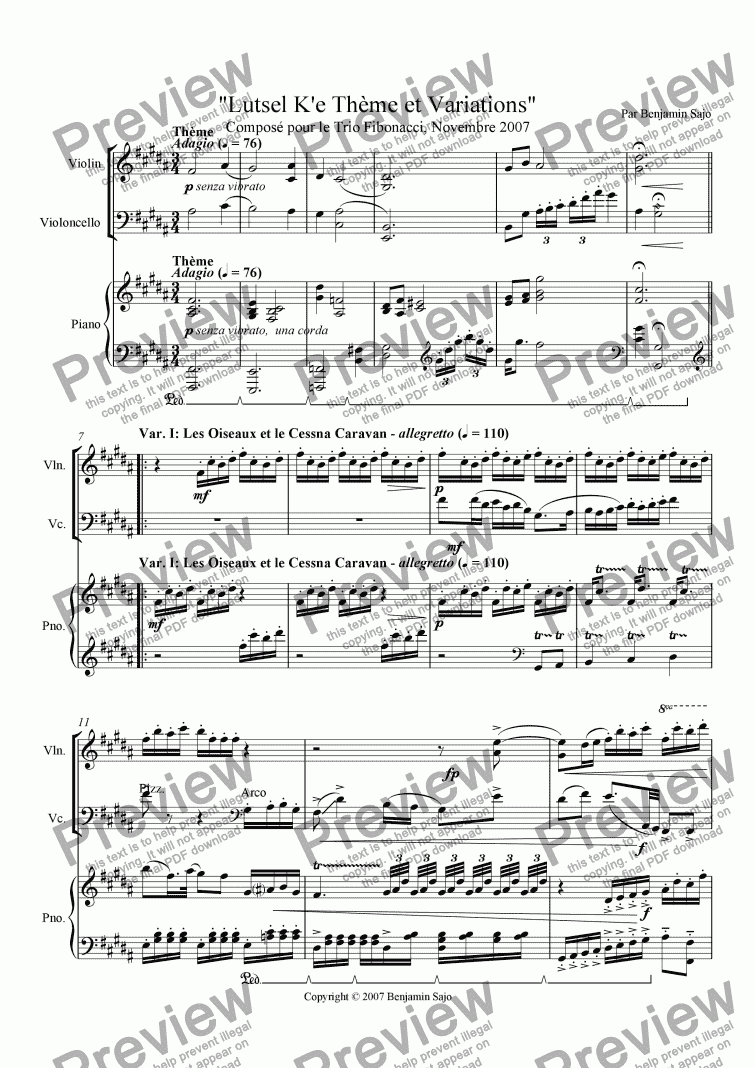 By: Benjamin Sajo
For: Piano trio

Composer
Benjamin Sajo
Year of composition
2007
Lyricist
none
Difficulty
Difficult (Grades 7+)
Duration
5 minutes
Genre
Modern classical music
License details
For anything not permitted by the above licence then you should contact the publisher first to obtain permission.

�Live with wolves, and you learn to howl� - Spanish Proverb

This composition is a theme-and-variations not in the traditional sense, in that the theme is modulated, inverted, augmented, and otherwise altered, but instead is more of a collection of colorful vignettes that built off of the same conceit. The "theme" in this case is the general conceit of vastness and awe inherent in Canada's Northwest Territories, a place my family called home for about five years. Each movement in turn represents an icon of the land. As follows: 1. The Birds and the Cessna Caravan. imagine being on the deepest freshwater lake in North America. Flocks of Canada geese, red-throated grebes gaggle overhead, and perhaps a bald eagle soaring. Coming from Yellowknife, a bush plane's propellers crescendo as it remains the most practical source of travel for many regions. 2. The Wolf-Dogs Howling at the Church Bells. It is Sunday morning. While the human congregation's numbers fluctuate considerable, one can always count on every dog in the community, like cockerels in the morning, breaking into a long, woeful chorus of blue fervor. 3. The Fish. In the community where my family lived, Lutsel K'e, its name translates from the Dene for "Place of the Small Fish." That is a misnomer. But then again, ninety-five percent of the fish are found in five percent of the water, and sometimes they put up a considerable fight as they surface from the pure fathoms. 4. Caribou and Arctic Cats and Finale. Perhaps the most important source of red meat for the people of Lutsel K'e are the vast herds of caribou that regularly migrate from the Barrenlands to the Taiga. Although their migration patterns have fluctuated slightly because of the diamond mining, the hunters roll out on their twenty-first-century Arctic Cats and live.

First Kiss and Afterwards, Little Lamb - A Happy Madrigal, "A Husky Howl", B'reshit - First Verse of Genesis, Rosy-Fingered Dawn Over the Wine-Dark Sea, Blues - Dedication to New Orleans, Suite to "Stories Gone Wilde", The Prom Song Lead Sheet!, The Prom Song for Big Band, Jazz Sonatina in F, "I Did Not Know What To Do", Love at Night, Toledo, Flee Freeride for Choir, The Girl Who Loved Her Horses, March Manitou, His Was A Life Of Greatness and Pete The Penguin