Sign in / Register
HomeInstrumentationsLarge mixed ensembleWhite Fang: Part 1 - The Trail of the Meat

White Fang: Part 1 - The Trail of the Meat

By: Benjamin Sajo
For: Large mixed ensemble
This music is in your basket
View basket
Loading... 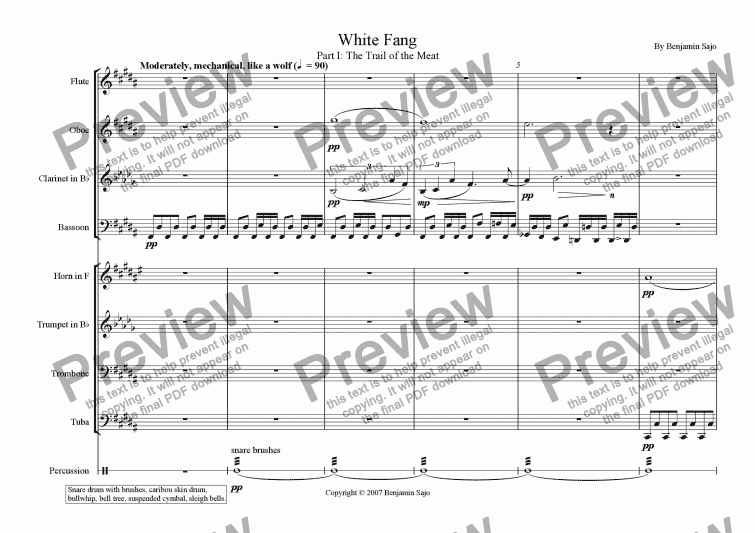 White Fang: Part 1 - The Trail of the Meat

Composer
Benjamin Sajo
Year of composition
2007
Lyricist
none
Difficulty
Difficult (Grades 7+)
Duration
10 minutes
Genre
Modern classical music
License details
For anything not permitted by the above licence then you should contact the publisher first to obtain permission.

�Dark spruce forest frowned on either side the frozen waterway. The trees had been stripped by a recent wind of their white covering of frost, and they seemed to lean toward each other, black and ominous, in the fading light. A vast silence reigned over the land. The land itself was a desolation, lifeless, without movement, so lone and cold that the spirit of it was not even that of sadness. There was a hint in it of laughter, but of a laughter more terrible than any sadness – a laughter that was mirthless as the smile of the Sphinx, a laughter cold as the frost and partaking of the grimness of infallibility. It was the masterful and incommunicable wisdom of eternity laughing at the futility of life and the effort of life. It was the Wild, the savage, frozen-hearted Northland Wild.�

This music was composed as a companion, inspired by the Klondike Gold Rush era novel White Fang, by Jack London, introduced to the world in 1905, little less than a decade since the fictional events take place. �Part I� is more like a prelude than anything else in the novel, and tells the story of two men, their sled dogs, carrying a third man in a coffin as they toil across the frozen Mackenzie taiga of Canada. A famished pack of wolves, led by a quarter-dog alpha-female, follows and seduces the sled dogs each night the two men make camp, and, once having led them far enough away from the team, she signals the rest of the pack for an easy supper. Eventually, they kill one of the men. Each perpetual night, what remains of the sled team grows more and more confused and restless, and the glowing greedy eyes beyond the fire grow closer and more uncomfortably closer.

Performance Notes: Although not always practical, in an ideal perfect world, my composition would best be performed outdoors by an open fire, day or night. The Dene caribou-skin, birchwood drum is, in fact, almost solely performed over a fire, particularly because of the delicate material which needs to be heated for best sonority. It should also always be played with a wooden stick, NOT an orchestral percussion mallet, and with the understanding that it can break and it�s not just expensive, but rare.

Also in favor of an outdoor performance is the fact that all of the instruments are wind instruments, and by having the full color palette of the wind ensemble in the hands of soloists allows for both intimate soloistic passages and more band-like homophony.

The performances should be arranged by all woodwinds on one side and all brass on the other, with the percussion at either the far right or the far left, but not the center.

One note about the shofar: if that�s unavailable, any other organic horn can be used, just nothing plastic or brass. Even a conch shell would suffice.

Reviews of White Fang: Part 1 - The Trail of the Meat