Sign in / Register
HomeInstrumentationsVoice + keyboardSong for high voice (Tenor/Soprano) - Does It Matter?

Song for high voice (Tenor/Soprano) - Does It Matter?

By: Mike Lyons
For: Voice + keyboard
This music is in your basket
View basket
Loading... 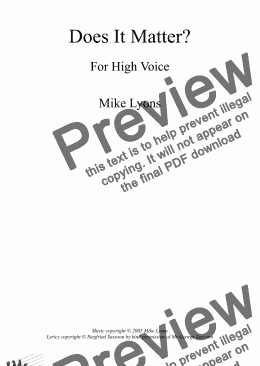 Song for high voice (Tenor/Soprano) - Does It Matter?

By: Mike Lyons
For: Voice + keyboard

In the first and third verses, the voice part asks the question with a rising phrase, followed by a kind of 'off-hand' rhythmic pattern. This is followed by a long descending phrase, like a shriek of pain, or a moan of terror (depending on which verse) and then the ironic line (And you need not show that you mind when the others come in from hunting to gobble their muffins and eggs/For they'll know you fought for your country and no one will worry a bit.)

The middle verse, by contrast, is deliberately more disoriented (blind) and takes a steadier tempo. The biting irony of "There's such splendid work for the blind, and people will always be kind." is underlined by the slightly slower 'jolly hockeysticks' of the accompaniment. At letter F there is an upsurge of pity for the poor blind soldier, but this soon passes as we move into verse 3.

Some of the intervals in this song are tricky for a vocalist, but well worth the effort if you would like to include a WW1 related song in your programme. 2017 is the anniversary year of several major battles in the "Great War".

Reviews of Song for high voice (Tenor/Soprano) - Does It Matter?