By: Austin HUANG
For: Piano trio
This music is in your basket
View basket
Loading... 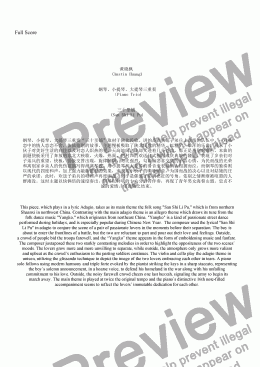 By: Austin HUANG
For: Piano trio

Composer
Austin HUANG
Year of composition
2009
Lyricist
none
Publisher
Pacific Northwest Cultural Exchange Council
Difficulty
Moderate (Grades 4-6)
Duration
11 minutes
Genre
World music
License details
For anything not permitted by the above licence then you should contact the publisher first to obtain permission.

This piece, which plays in a lyric Adagio, takes as its main theme the folk song "San Shi Li Pu," which is from northern Shaanxi in northwest China. Contrasting with the main adagio theme is an allegro theme which draws its tune from the folk song "Yangko," which originates from northeast China. "Yangko" is a kind of passionate street dance performed during holidays, and is especially popular during Chinese New Year.

The composer used the lyrical "San Shi Li Pu" in adagio to conjure the scene of a pair of passionate lovers in the moments before their separation. The boy is about to enter the frontlines of a battle, but the two are reluctant to part and pour out their love and feelings. Outside, a crowd of people bid the troops farewell, and the �Yangko� theme appears in the form of emboldening music and fanfare. The composer juxtaposed these two starkly contrasting melodies in order to highlight the oppositeness of the two scenes� moods.

The lovers grow more and more unwilling to separate, while outside, the atmosphere only grows more valiant and upbeat as the crowd�s enthusiasm to the parting soldiers continues. The violin and cello play the adagio theme in unison, utilizing the glissando technique to depict the image of the two lovers embracing each other in tears. A piano solo follows using modern harmony and triple forte evoked by the pianist striking the keys in a sharp staccato, representing the boy�s solemn announcement, in a hoarse voice, to defend his homeland in the war along with his unfailing commitment to his love. Outside, the noisy farewell crowd cheers one last huzzah, signaling the army to begin its march away. The main theme is played at twice the original tempo and the piano�s distinctive 16th note-filled accompaniment seems to reflect the lovers� immutable dedication for each other.