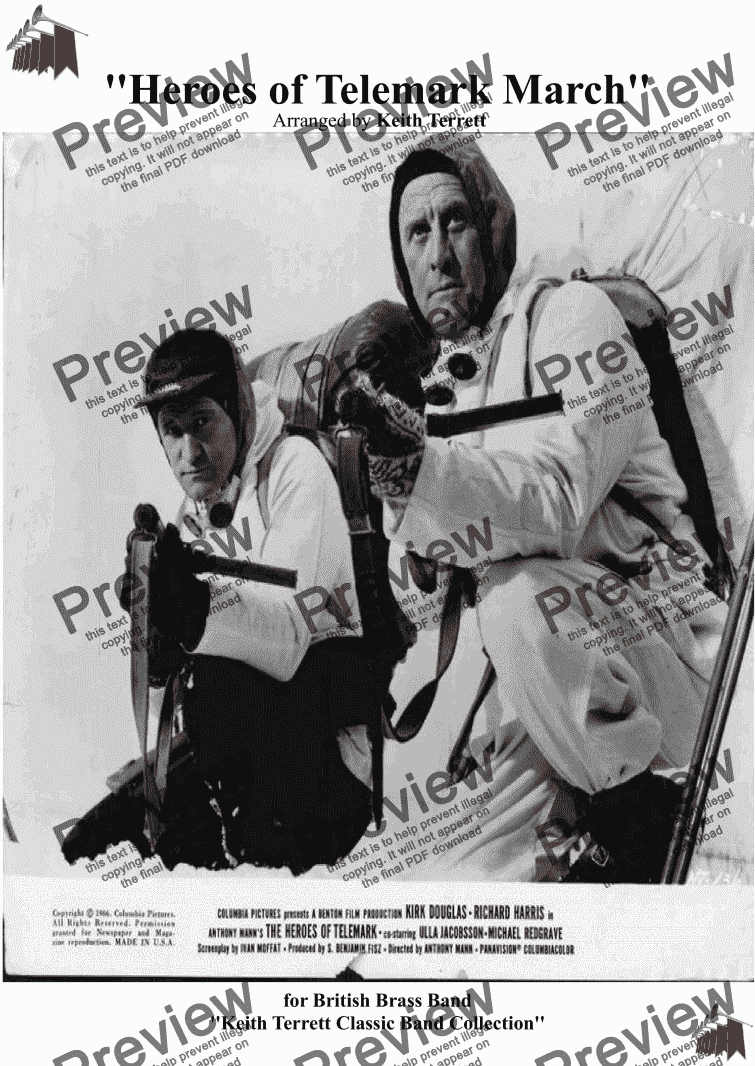 Composer
Keith Terrett
Year of composition
2009
Arranger
Keith Terrett
Publisher
Music for all Occasions
Difficulty
Moderate (Grades 4-6)
Duration
3 minutes
Genre
Other
License details
For anything not permitted by the above licence then you should contact the publisher first to obtain permission.

This march is based on traditional melodies from Telemark in Southern Norway. Telemark is famous in Norway, for the operation during the 2nd world war; which resulted in the bombing of the heavy water plant in Rujkan. The Kirk Douglas film ’’ The Telemark Heroes’’; tells the story with just a touch of Hollywood!

Telemark is also well known for its canal system(featuring many locks), which winds its way from the city of Skien where Ibsen was born, to the small village of Dalen, in the mountains of Southern Norway.

This march is dedicated to the British & Norwegian soldiers and civilians, who gave their lives during this action in Telemark, in Southern Norway.

The march will need some carefull rehearsal to balance all the parts. The counter melodies should be brought forward, and played in a ’cantabile’ style.

Conductors should pay attention to the melody, and melody harmony from A. The three parts should be carefully rehearsed and balanced, so that all parts are equal. Don’t let everyone play the melody only!

If North American Brass Bands require lower brass parts in Bass Clef, e-mail me your requirements: keithterrett@gmail.com This service is free of charge.

Really love this march by Keith Terrett for Brass Band.

The melodies are very catchy and the arrangement perfectly captures the sounds of Norway!

Great march for any band!!