By: Monti
For: Percussion ensemble
This music is in your basket
View basket
Loading... 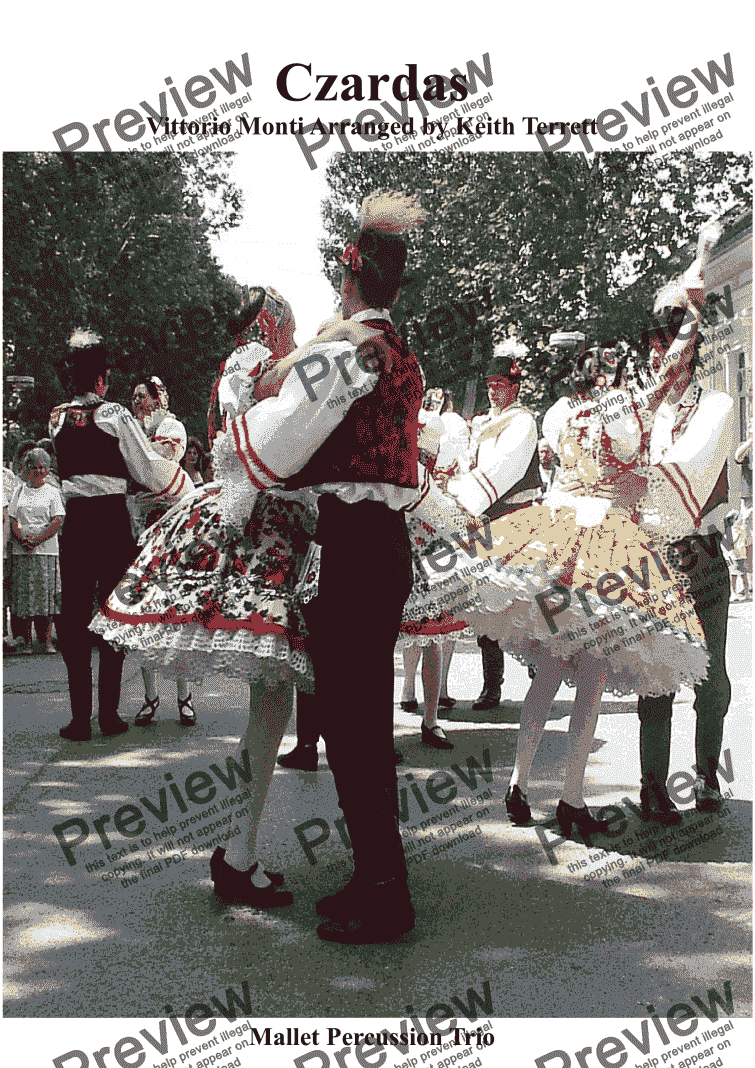 By: Monti
For: Percussion ensemble

Composer
Monti
Year of composition
1904
Arranger
Keith Terrett
Year of arrangement
2008
Publisher
Music for all Occasions
Difficulty
Moderate (Grades 4-6)
Duration
3 minutes
Genre
Classical music
License details
For anything not permitted by the above licence then you should contact the publisher first to obtain permission.

Czardas arranged for Mallet Ensemble of Monti’s Czardas, with a touch of the exotic ''rumba"!

Csárdás (/ˈtʃɑːrdæʃ/, US: /-dɑːʃ/; Hungarian: [ˈt͡ʃaːrdaːʃ]), often seen as Czárdás, is a traditional Hungarian folk dance, the name derived from csárda (old Hungarian term for roadside tavern and restaurant). It originated in Hungary and was popularized by bands in Hungary and neighboring lands of Slovenia, Burgenland, Croatia, Transylvania, Slovakia and Moravia, as well as among the Banat Bulgarians, including those in Bulgaria.

The origin of the csárdás can be traced back to the 18th century Hungarian music genre the verbunkos, where the 'verbunk' was used as a recruiting dance by the Austrian army.

The csárdás is characterized by a variation in tempo: it starts out slowly (lassú) and ends in a very fast tempo (friss, literally "fresh"). There are other tempo variations, called ritka csárdás, sűrű csárdás and szökős csárdás. The music is in 2 4 or 4 4 time. The dancers are both male and female, with the women dressed in traditional wide skirts, which form a distinctive shape when they whirl.

Classical composers who have used csárdás themes in their works include Emmerich Kálmán, Franz Liszt, Johannes Brahms, Léo Delibes, Johann Strauss, Pablo de Sarasate, Pyotr Ilyich Tchaikovsky, Franz von Suppé and others. The csárdás from Strauss' operetta Die Fledermaus, sung by the character Rosalinde, is probably the most famous example of this dance in vocal music. One of the best-known examples of instrumental csárdás is the composition by Vittorio Monti for violin and piano. This virtuoso piece has seven tempo variations.

The original folk csárdás, as opposed to the later international variants, is enjoying a revival in Hungary thanks to the táncház movement.

A great piece for your next concert after lockdown!