By: Wolfgang Amadeus Mozart
For: Orchestra
This music is in your basket
View basket
Loading... 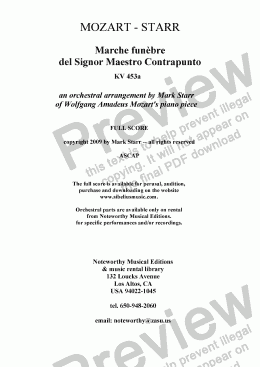 By: Wolfgang Amadeus Mozart
For: Orchestra

A delightful funeral march? Yes, when it is a funeral march by Mozart composed as a joke. One of Mozart's students, a girl named Babette Ployer, showed extraordinary promise as a pianist. (In 1784, Mozart would compose two of his greatest piano concerti for her.) However, she hated her studies in counterpoint. So as not to discourage her remarkable progress as a piano student, he removed counterpoint from her curriculum. But Mozart being Mozart, he did it in a charming and ironic manner, by composing a tiny dirge that contained absolutely no counterpoint, thus burying il Signor Maestro Contrapunto, the noble but boring personification of counterpoint. The entire piece lasts 16 bars - with repeats, 32 bars.

Like other ostensibly simple pieces by Mozart, his simplicity is deceptive. This little piece, written just for Babette (and discovered after Mozart's death in her album,) is touched by genius.

It seemed to me that in order to give il Signor Maestro Contrapunto a proper send-off, this amusing but poignant music deserves to be orchestrated in the manner of Mozart's other funeral marches – in particular, the Masonic Funeral Music, KV 477. In addition to orchestrating the work, I have made a number of additions, within the normal performance practice of Mozart's time. I do not reproduce the repeats exactly. Instead, I use the repeats as an opportunity to introduce melodic ornaments and some slight harmonic modifications. Moreover, it seems to me a fitting gesture to honor the alleged passing of il Signor Maestro Contrapunto with a short virtuoso cadenza (which is optional in performance.) This cadenza I have given to the clarinet. I've inserted it just before Mozart's last bar. You see, il Signor Maestro Contrapunto is not really dead. He lived on in the late works of Mozart, and all the masters who followed. He lives on today in the music of many contemporary composers. You can hear il Signor Maestro laughing at us in the clarinet cadenza.

In addition to perusing the score online and hearing it played by basic MIDI sounds with SCORCH, you can also listen online to an MP3 made with enhanced musical sounds. And if you wish, you can download this MP3 file free-of-charge for repeated listening.

Please let me know what you think of this orchestral arrangement of Mozart's Marche funebre del Signor Maestro Contrapunto - either by email (just click the button EMAIL THE PUBLISHER) or with an online review. I am always interested to read listeners' comments.