By: Count Leo Tolstoy
For: Orchestra + solo Flute
This music is in your basket
View basket
Loading... 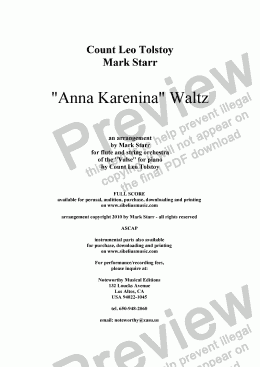 This waltz is the only known musical composition by Count Leo Tolstoy, author of "War and Peace" and ’Anna Karenina.’ It was notated by A. Goldenveizer after he heard Tolstoy perform it on the piano in 1906 before Taneev (presumably the Russian composer/pianist Sergei Taneyev) and Yasnaya Polyana. Goldenveizer later collaborated with A. Gusev on a book, "Leo Tolstoy and Music," published in Moscow in 1953, in which this waltz was published.

The nickname "Anna Karenina" Waltz is mine (as is the decorative flute solo.)

Goldenveizer attributed the composition of this piano piece to Tolstoy’s youth. Thus, it was likely composed around the time Tolstoy wrote Anna Karenina – the book which he later called his "first true novel." Tolstoy wrote this novel in incomplete serial form during the years 1873 to 1877, and it was first published complete in book form in 1878.

"Anna Karenina" is filled with aristocratic balls and waltzes. One of the most notable ballroom scenes comes in Part 1. Vronsky pays Anna considerable attention. He dances with her, choosing her as his partner instead of Kitty - who is shocked and heartbroken. Kitty realises that Vronsky has fallen in love with Anna. Despite Vronsky’s overt flirtations with Anna, he has no intention of marrying her. He views his attentions to her as mere amusement, and he believes that she does the same.

Incidentally,a recent poll of 125 contemporary authors - published in 2007 in "The Top Ten" - declared that Anna Karenina is the "greatest novel ever written".

I suggest to all: re-read Part 1 of "Anna Karenina" while listening to the MP3 demo recording of this waltz, composed by the author of the novel. I think it is a unique experience.

Reviews of TOLSTOY - STARR; "Anna Karenina" Waltz (an orchestral arrangement by Mark Starr of a waltz for piano composed by Count Leo Tolstoy)