By: W. A. Mozart
For: Orchestra + solo Harp
This music is in your basket
View basket
Loading... 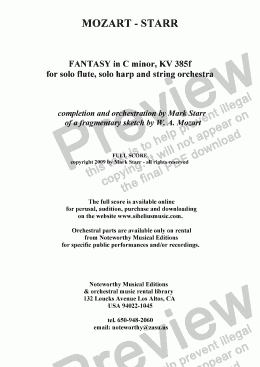 Composer
W. A. Mozart
Year of composition
1789
Arranger
Mark Starr
Publisher
Noteworthy Musical Editions
Difficulty
Moderate (Grades 4-6)
Duration
9 minutes
Genre
Classical music
License details
For anything not permitted by the above licence then you should contact the publisher first to obtain permission.

Many people believe that masterpieces poured effortlessly out of Mozart and onto manuscript paper, with nary a sketch or a correction. In fact, many of his manuscripts show no traces of changes or corrections. But mixed in with Mozart’s works in manuscript form are a considerable number of fragmentary sketches and unfinished compositions. Whether he abandoned these works in mid-stream, or merely put them aside for more work at a later time, no one can say.

One of the most intruiging of the fragmentary sketches is the Adagio, KV 385f - which is known by the name of Fantasy in C minor. Mozart composed 27 bars, about one half of the movement (up until repeat barline.) It is theorized that he intended the piece for violin and piano - but who knows how the piece would have ended up had he finished it? For some unknown reason, he stopped in the middle. Possibly, he intended to recast the material. Previous attempts have been made to complete the work, the most notable being the realizatioin by Maximillian Stadler - who turned the fragment into a very long piano piece. Personally, I find very little connection, either thematically or stylistically, between the first and the second half of his realization.

It should be stressed that Mozart’s sketch is great music, incomplete though it may be - and it promised still greater things to come. This is a very late composition. Recently, it was defintively dated as being composed in 1789, two years before the composer’s death. (It’s Kochel number suggests that it was composed much earlier, but that is misleading.) Music of this extraordinary quality should not be left to dusty archives. It calls out for a completion to make the music accessible to modern listeners in live performances.

When I first examined Mozart’s sketch, I was struck by the similarity of the keyboard writing to Mozart’s writing for the harp in his Concerto for Flute and Harp. Upon analyzing the sketch in detail, it became clear to me that the sketch could be arranged for flute, harp and string orchestra - using the Concerto for Flute and Harp as a model. My orchestration call for the harp to play some chromatic notes. These notes were not playable on a diatonic harp (but, of course, they are easily playable today on any modern double-action harp.)

Before anyone denounces me to the Early Music Police, they should read the following excerpt from Wikipedia’s article on the Development and History of the Harp in Europe. Some chromatic notes were indeed usable in Mozart’s time on single action harps equipped either with pedals or manual tuning by frets. "By the baroque period, in Italy and Spain, more strings were added to allow for chromatic notes; these were usually in a second line of strings. At the same time single-row diatonic harps continued to be played. The first primitive form of pedal harps were developed in the Tyrol region of Austria. Hochbrucker was the next to design an improved pedal mechanism, followed in succession by Krumpholtz, Nadermann, and the Erard company, who came up with the double mechanism. In Germany in the second half of the 17th century, diatonic single-row harps were fitted with manually-turned hooks which fretted individual strings to raise their pitch by a half step. In the 1700s, a link mechanism was developed connecting these hooks with pedals, leading to the invention of the single-action pedal harp. Later, a second row of hooks was installed along the neck to allow for the double-action pedal harp, capable of raising the pitch of a string by either one or two half steps. The idea was even extended to triple-action harps, but these were never common. The double-action pedal harp remains the normal form of the instrument in the Western classical orchestra."

So, some chromatic notes were indeed playable on the harp during Mozart’s lifetime. Indeed, in Mozart’s Concerto for flute and harp in C Major, one encounters innumerable F-sharps, C-sharps, G-sharps, B-flats and E-flats. However, Mozart composed this concerto (KV 299) in 1778 in Paris. The Fantasy, despite its middle-range Kochel numbers, was composed in Vienna in 1789. It was precisely during those intervening years that composer/harpist/inventor Jean-Baptiste Krumpholz perfected the pedal mechanism for the single-action harp, thus permitting the fast alternation of chromatic notes with the feet. Krumpholz, who died in 1790 (a year before Mozart,) wrote many chromatic notes in his works for the pedal single-action harp.) Consequently, there is no historical reason why my inclusion of some chromatic harp notes in my orchestration should be considered anachrontistic. There were pedal harps in Austria during Mozart’s lifetime, and there were double-strung chromatic harps as well.

Mozart may have intended the sketch of the C Minor Fantasy for violin and piano. But then, why didn’t he finish the piece. One might speculate that Mozart put it aside at mid-point so he could revise it for pedal harp – but his untimely death in 1791 intervened. Who is to say that he didn’t?

With regard to completion of the movement, my realization of the second half of the work entailed no new or original thematic material. All the themes in the second half are either developed from Mozart’s themes, or they are exact repeats (in the re-capitulation.)

With regard to my exploration of remote tonal centers, I used as a model another Adagio by Mozart – the Adagio in B minor for piano, KV 540 – another late work with which the Fantasy in C minor shares many striking similarities. Anyone who is shocked by my progressions to distant key centers should review the Adagio in B minor or the Fantasy in F minor for mechanical organ, KV 608 (another late masterpiece.) Mozart reveled in his modulations to surprising keys.

I hope that flute/harp duos will find this arrangement a worthy companion to the Concerto for Flute and Harp - that unique concert work whose special sonority is forever linked to Mozart.