Sign in / Register
HomeInstrumentationsOrchestra + soloBEETHOVEN - STARR; Return to Ulster (an orchestration by Mark Starr of Beethoven’s song for voice, piano, violin and cello, with text by Sir Walter Scott)

BEETHOVEN - STARR; Return to Ulster (an orchestration by Mark Starr of Beethoven’s song for voice, piano, violin and cello, with text by Sir Walter Scott)

By: Ludwig van Beethoven
For: Orchestra + solo Solo Tenor
This music is in your basket
View basket
Loading... 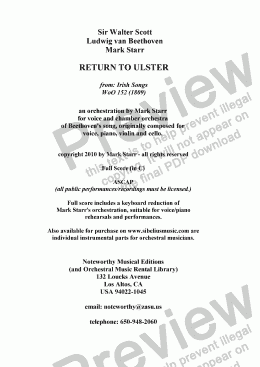 BEETHOVEN - STARR; Return to Ulster (an orchestration by Mark Starr of Beethoven’s song for voice, piano, violin and cello, with text by Sir Walter Scott)

In 1809, Beethoven was contacted by George Thomson, a Scottish publisher and orchestral musician, who asked the composer to set various Irish texts to music, utilizing traditional Irish tunes. Although hesitant at first about the commission, Beethoven soon warmed up to the project. He saw that the texts were of high literary quality, beginning with a powerful poem by the celebrated poet Sir Walter Scott. The tunes were beautiful, and they suggested to him sophisticated musical development. Beethoven began composing his Irish songs in 1809, working on them on-and-off, until 1820. Eventually, Beethoven would compose for Thomson 64 Irish songs in all. Most of them were published in Twenty-five Irish Songs (WoO 152, 1814), Twenty Irish Songs (WoO 153, 1814-1816), and Twelve Irish Songs (WoO 154, 1816). Beethoven also set traditional melodies from Scotland, Wales, England, France and Central Europe.

The composition of the Irish Songs has seldom been taken seriously by scholars, critics and concert singers – despite the self-evident fact that - taken together with Beethoven’s setting of songs from Wales, Scotland, Britain, Central Europe and France – they represent a substantial portion of Beethoven’s total output; and they occupied his attention for more than a decade during his Late Period. This neglect seems to me an example of musical snobbery, based on a specious comparison with Beethoven great instrumental, choral and operatic works. A careful examination of these songs reveals that Beethoven took great care on this massive song project for Thomson. He was inspired to compose much music of extraordinary beauty and dramatic impact.

These are not simple folk songs - they are sophisticated settings of songs with a Folk-like character. Some of the melodies were composed by known balladeers.

It has often been assumed by many that Beethoven merely arranged folk tunes for these songs, but that is not the case. The Return to Ulster is only loosely based upon the air known as Young Terrence MacDonough, and Beethoven’s setting is strikingly original and unmistakably Beethoven’s music. It is just as much part of his original output as are his Variations on a Theme by Mozart, his Waldstein Variations and his Diabelli Variations.

The accompaniments for most of Beethoven’s Irish Songs were set for the unusual ensemble of piano, violin and cello. I say ’unusual’ because neither the violin nor the cello were treated by Beethoven as soloists. When the accompaniment has melodies to play, those melodies are almost always given to the piano. For the most part, the violin serves merely to sustain harmonies in the background; and the cello often underlines the bass line in the pianist’s left hand. However, Beethoven being Beethoven, the piano parts are often considerably more than just om-pah accompaniments so typical of folksongs. Indeed, they are usually of a distinctly orchestral character.

Thomson’s idea for new Scottish and Irish songs initially grew out of his earlier performances at the St. Cecilia Concerts in Glasgow, in which traditional airs sung by travelling castrati were accompanied by an orchestra (in which Thomson played.) Castrati may not be available for concerts these days - but it occurred to me that the orchestration of the accompaniments in some of these songs might enhance their dramatic and artistic impact for modern-day audiences. And they might be historically appropriate, as well. Consequently, I have scored several of these songs for chamber orchestra. My score includes a keyboard reduction of my orchestration. This keyboard reduction is suitable for rehearsals, or even performances, for voice and piano. Also available for purchase with the orchestral score are individual parts for strings and horns.

The Return to Ulster is one of Sir Walter Scott’s most powerful and mysterious ballads. It describes the return of an elderly self-imposed exile to the glorious land of his youth: the Clanbrassil region of Ulster province in Northern Ireland. To pursue fame and fortune elsewhere, the exile had turned his back on his birthplace. In his quest, he forsake his chance for love with a beautiful maiden. Now, at the end of his days, he would gladly exchange all his fame and fortune for someone to share his thoughts and dreams. In the closing lines, he exclaims: "Take the fame and the riches ye brought in your train, and restore me the dream of my spring-tide again."

Although the story of this man’s return to Ulster is told in the first person, the poem is not autobiographical -since Walter Scott was born in Edinburgh and was brought up in the rural Borders Region of Scotland. Scott’s poem was an adaptation of YOUNG TERENCE MACDONOUGH (Toirdealac Og Mic Doncad), composed by blind Irish harper Turlough O’Carolan in 1696. O’Carolan’s melody was a slow air or planxty, in ¾ time. O’Carolan�s lyric commemorated the death of the son of Terence MacDonough of Sligo, in Connacht. However, Scott’s poem does not mention the death of MacDonough’s son. It deals only with the disillusionment of an old man at the end of a life of fame and fortune.

Reviews of BEETHOVEN - STARR; Return to Ulster (an orchestration by Mark Starr of Beethoven’s song for voice, piano, violin and cello, with text by Sir Walter Scott)