The End is Near

By: Robert James Thoms
For: Orchestra
This music is in your basket
View basket
Loading... 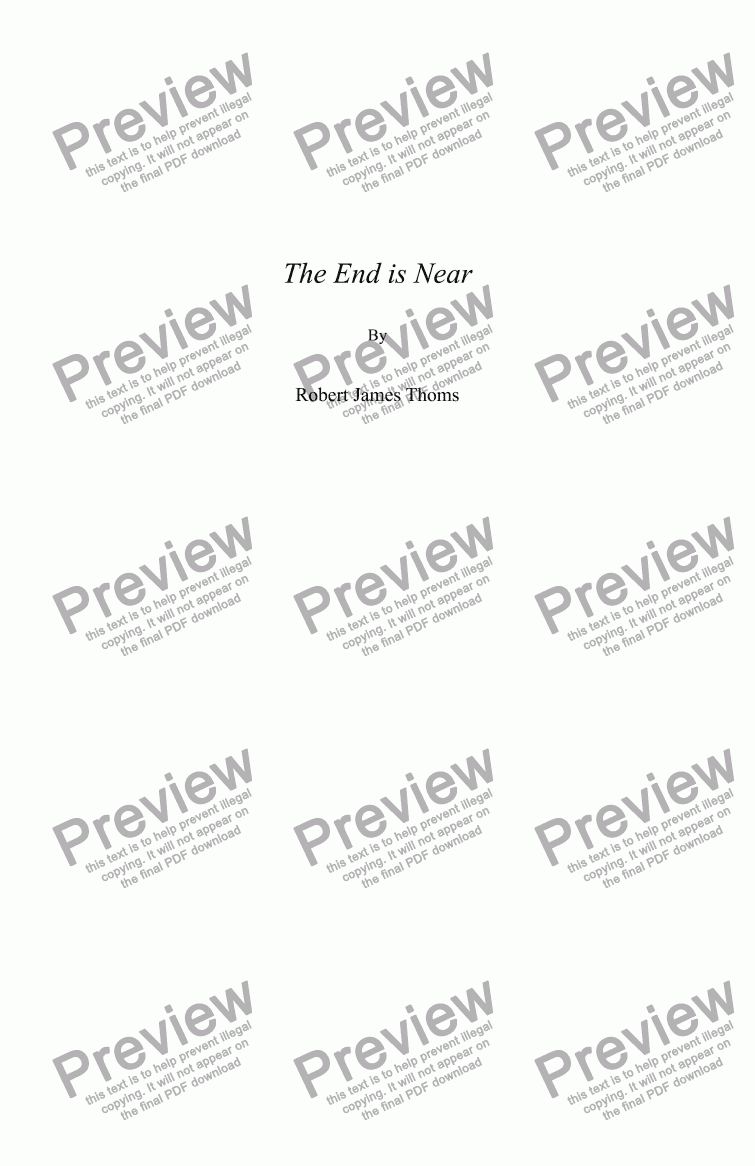 The End is Near

By: Robert James Thoms
For: Orchestra

Composer
Robert James Thoms
Year of composition
2002
Lyricist
none
Difficulty
Difficult (Grades 7+)
Duration
9 minutes
Genre
Modern classical music
License details
For anything not permitted by the above licence then you should contact the publisher first to obtain permission.

I wrote music for approx. 3 years, from 2001 to 2004. This is an earlier work, written during the first six months. Nevertheless, I still consider this piece to be, in many ways, my signature piece.

It is a musical expression of the final destiny of the world of man that has rejected the Christ of God, and therefore it has a tragic feel. The end of man’s kingdoms, however, rather than being occasion for sorrow in the eyes of a Christian, the passing away of said kingdoms is occasion for joy. For for the Christian, the end in this way is only the beginning - the beginning of the manifestation of God’s kingdom on the earth. The same, however, cannot be said of those who are not Christians. Their hopes are in this life, ours are not. This is their home, we are only strangers and pilgrims on the earth passing through.

The repetition of themes is deliberate (there is nothing new under the sun [Eccles. 1:9]). Kingdoms come and kingdoms go; kings rise and kings fall; someone will be born today, and someone will die today. Since the "garden of Eden," man has been MARCHING toward destruction (even though he is presently in it) despite his denial of his present state. Moreover, the bettering of the world, advances in technology and the like, have only worsened man’s chances of salvation because these things only make him feel more comfortable in his alienation from God - less and less do men see their need for the Savior as the world advances in the context of what is profitable in man’s eyes!

The present unity that men aspire towards will bring about the ultimate division between God who sits in the heavens and men here on the earth. Scripture teaches that in the last days the world would unite as one under the last great world dictator, the Antichrist, who will then lead all the inhabitants of the earth in a final rebellion against God (Rev. 19:19 ). The Euro dollar, or some form of it (the European Union is undoubtedly the "beast that rises out of the sea"), ultimately becomes the Mark of the Beast, a mark that no man can buy or sell unless he has, and a mark once taken seals one’s eternal destiny in the lake of fire.

Even though the end of man’s day, an expression coined by Paul (1 Cor. 4:3 ’man’s judgement’ K.J.V. is literally ’man’s day’ in the Greek), will be sudden and abrupt (1 Thess. 5:3), I have opted for a traditional morendo ending which sufficiently preserves the idea of man’s kingdoms "dying away."

Reviews of The End is Near

Sorry, there's no reviews of this score yet. Please .
In order to submit this score to ScoreExchange.com Robert James Thoms has declared that they own the copyright to this work in its entirety or that they have been granted permission from the copyright holder to use their work. If you believe that this score should be not available here because it infringes your or someone elses copyright, please report this score using the copyright abuse form.