By: Franz Liszt
For: Orchestra
This music is in your basket
View basket
Loading... 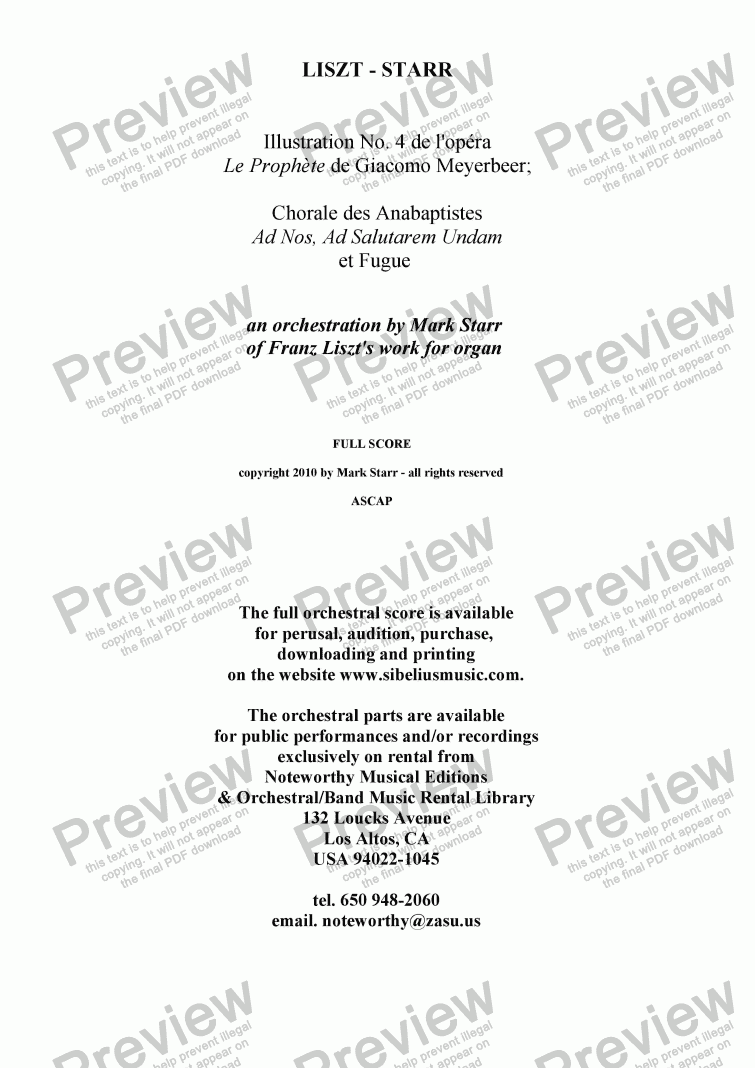 By: Franz Liszt
For: Orchestra

Giacomo Meyerbeer's opera 'Le Prophete' was premiered in Paris in 1849 to wild acclaim. The public's enthusiasm for the work - especially for Meyerbeer's powerful music - was unbounded. The French critic and music historian Fetis called 'Le Prophete' "a remarkable production in the History of Art."

Immediately following the Paris premier, a spectacular production was mounted in London. It, too, was a great success. The following year, the opera swept the major theaters of Europe, quickly becoming one of the most popular works of the mid-19th Century.

One musician who was particularly struck by the music in this opera was Franz Liszt. Although in 1850, he had his hands full mounting the premier production of Wagner's 'Lohengrin' in Weimar (where Liszt was Director of the Court Opera,) he took time out to create four keyboard 'Illustrations' of Meyerbeer's 'Le Prophete.' Liszt's works are not typical piano fantaisies based on themes of popular operas, so characteristic of virtuoso pianists of the era. On the contrary, Liszt's 'Illustrations' are among his most adventurous and monumental works. Supremely difficult to play, there is very little virtuoso filagree or keyboard acrobacy in any of them. To complete this series of illustration, Liszt composed a 'Fantaisie and Fugue' based on the chorale sung by the Anabaptists (an original hymn by Meyerbeer entitled 'Ad nos, ad salutarem undam.') The 'Fantaisie and fugue' is for organ, not for piano. It ranks among Liszt's most grandiose, complex and difficult works. Subsequently, Liszt published the Fugue alone, as the fourth of the 'Prophete' illustrations.

I have orchestrated Liszt's fugue, employing a huge symphony orchestra - such as Liszt utilized in his 'Faust' Symphony. In addition, I have taken the chorale as it appears in 'Le Prophete,' harmonized it as Liszt did in his 'Fantaisie,' and orchestrated it for low woodwinds. I have employed the hymn as a short introduction to the fugue.

I hope listeners will elect to audition the MP3 demo recording, which was realized with enhanced digital instruments. (Just click on the green button marked Listen to MP3.)

I also hope browsers will express their opinions about Liszt's "Chorale and Fugue on Meyerbeer's 'Le Prophete'," and my orchestration of this work – either in an online review or in an email to me (just click on the green button Email the Publisher.) I am always interested in reading listeners' observations on my orchestrations and compositions.