Performed by Whatcom Symphony Orchestra May 14, 2011

By: Austin HUANG
For: Orchestra
This music is in your basket
View basket
Loading... 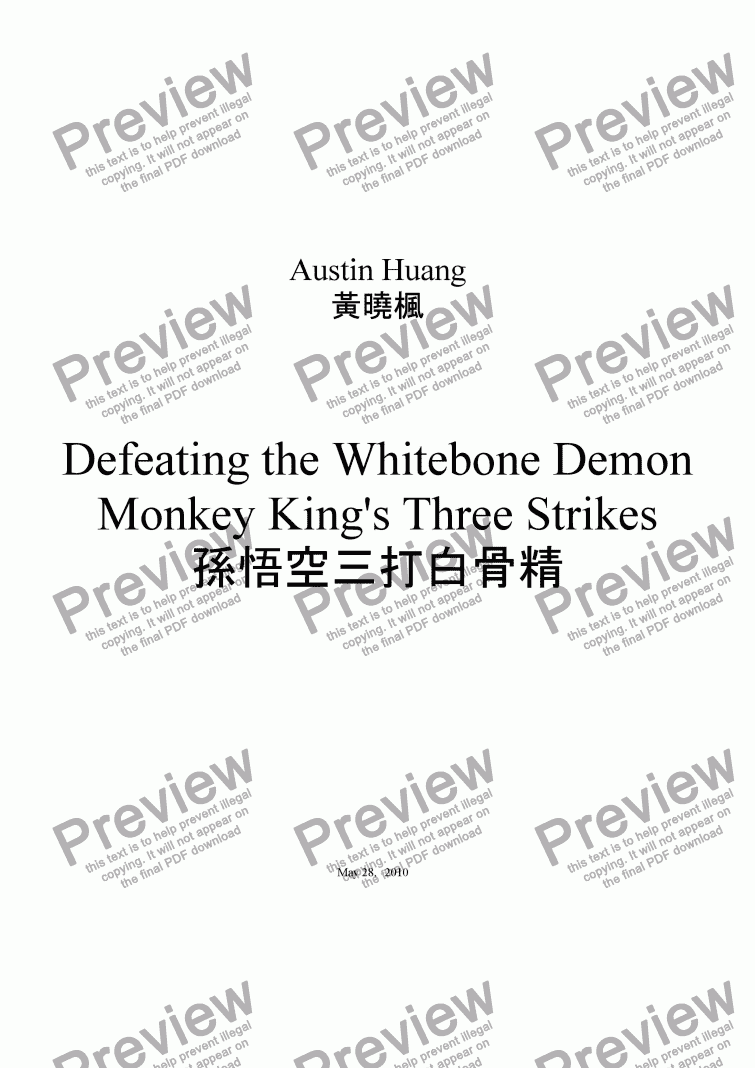 Performed by Whatcom Symphony Orchestra May 14, 2011

By: Austin HUANG
For: Orchestra

This piece is composed of 12 tone theory telling an ancient Chinese famous story. The story teller(s) will tell the story with the music.

Journey to the West

Monk - Tang Seng Tripitaka, was a traditional honorific for a Buddhist monk) is the Buddhist my onk who set out to India to retrieve the Buddhist scriptures for China.

Monkey - born from a stone nourished by the vital essence nature for five hundred years, who learns the art of the Tao, 72 polymorphic transformations, combat, and secrets of immortality, and through guile and force makes a name for himself as the Qíti�n Dàshèng OR "Great Sage Equal to Heaven". HE was trapped by Buddha under a mountain and sealing the mountain with a talisman for five hundred years.

The most intelligent and violent of the disciples, he is constantly reproved for his violence by Tang Seng. Ultimately, he can only be controlled by a magic gold band that the Bodhisattva has placed around his head, which causes him bad headaches when Tang Seng chants certain magic words (Band-tightening Spell).

He uses a As-You-Will Gold-banded Pole, he travels by somersault cloud, one jump for 180,000 miles

Pig - Eight-precepts. He was previously Marshal Tīan Péng, commander of the Heavenly Naval forces, banished to the mortal realm for flirting with the Princess of the Moon Chang’e. He is characterized by his insatiable appetites for food and sex, and is constantly looking for a way out of his duties, which causes significant conflict with the Monkey. Nevertheless he is a reliable fighter.

Friar Sand - He was previously Great General who Folds the Curtain, banished to the mortal realm for dropping (and shattering) a crystal goblet of the Heavenly Queen Mother. He is a quiet but generally dependable character, who serves as the straight foil to the comic relief of the Monkey and Pig.

This piece is particularly good for Children’s concert as contemporary music education material.